XRP price took a massive plunge to the $0.14 on BitMEX, Bitcoin registered a spike of 3.89% after $16 million longs liquidation

A few hours ago, the price of XRP dropped to only $ 0.14 on the cryptocurrency exchange BitMEX, Seychelles. This drop of XRP was accidentally liquidated many traders. 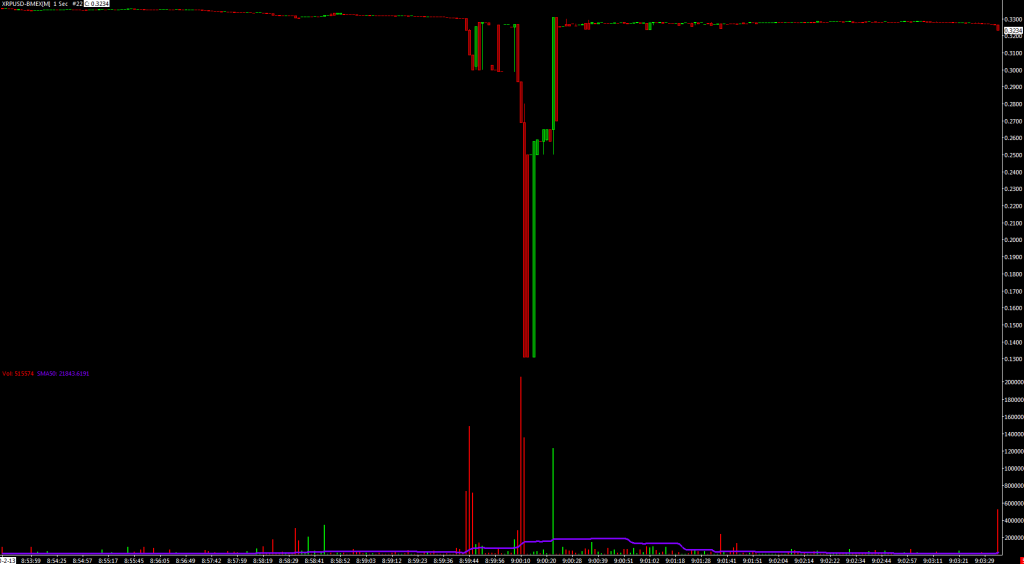 The XRP price recently collapsed to just $0.14 on BitMEX

The XRP price market on BitMEX is especially volatile

The decline was so severe that many stop losses did not trigger, resulting in the entire BitMEX account being wiped out. BitMEX currently does not comment on flash issues. However, it can be argued that the exchange must be responsible because stop-losses failed.

WTF. FUCK YOU BITMEX. This is really not okay! My stop didn´t trigger and my entire bitmex account is fucking gone. Fuck you! pic.twitter.com/WHXbJoiTvL

BitMEX uses fair price markers to avoid unnecessary liquidation that may occur when a given currency is subject to market manipulation. However, some users have suggested that because of this failure, they have lost all their money.

The flash crashes in the past

Flash crashes are relatively uncommon for significant cryptocurrencies like XRP. However, for less liquid Altcoins, this is more common. For example, 1,800 Bitcoins were removed from the margin trading group on Poloniex after having a problem with its CLAM/BTC trading pair. The exchange has since paid off the losses, but the embarrassing fiasco severely compromised the exchange’s reputation.

A similar situation happened with MATIC on Binance, where margin traders were liquidated in December, losing around 70% in just a few minutes.

Not long ago, BitMEX CEO called XRP a ‘dogsh*t’ and asserted that he didn’t care what the cryptocurrency did. All the matter was that it had trading volume. The price of XRP is worth more than zero, so who cares what it does.

Is it called Ripple, XRP, or dogshit? Who knows, who cares. It’s worth more than zero so it’s time to trade the USD pair on BitMEX. Boo-Yaka-sha! https://t.co/pa3T5vd5kl

Bitcoin spiked almost 4%, hours after the liquidation longs of $ 16 million

The reason is the liquidation of Bitcoin longs, which were worth around $ 16 million. At the time, many in the community believed that such a discount would soon cause another bull run, something that happened within hours. The 4% mentioned above increase could indicate that new investors are flocking to the market, following the long-term path of price increases.

However, it should be noted that at press time, the Bitcoin price has started to return to normal, hovering around $ 10,234, down slightly by 1% in the past 24 hours.