The XRP price is up 12% or more at the end of the working week. There are two reasons for the favorable price movements, the first is directly related to developments around XRP and Ripple.

XRP Price up 12.3% from Monday as Major News Expected

Thus, the main narrative for XRP last week was the Ripple Swell conference, where, in addition to representatives of the crypto industry, officials from major traditional financial corporations, be they Mastercard or Bank of America, were also present.

As the conference flowed, XRP enthusiasts were expecting big announcements, and they got them. Thus, advances in using RippleNet and On-Demand Liquidity technologies were declared. The tremendous growth in using XRP-powered technologies should help the cryptocurrency expand and grow even more.

That said, these are not all the announcements from the conference, according to Ripple CEO Brad Garlinghouse, and there are more to come. At the same time, the company’s litigation with the SEC is coming to a head, which is also a crucial point.

Another upside driver this week is the technical correction of the XRP price. Last week’s FTX crash caused the crypto market to suffer significant losses, with the XRP price dropping 27.6%. However, it is worth noting that XRP has recovered much better than other cryptocurrencies. For example, Bitcoin, the token, has shown a growth of almost 10% these days. 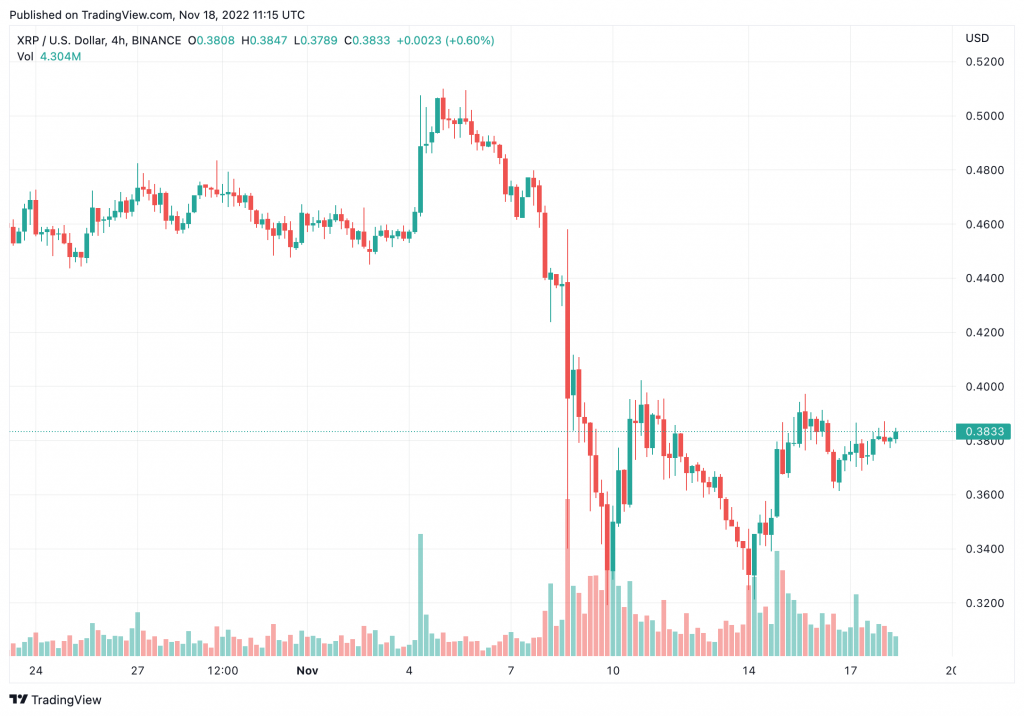 In a recent interview on CNBC’s Squawk Box, Mad Money host Jim Cramer shared his take on the recent happenings on the crypto market in the wake of the tragic FTX collapse. Cramer, critical of cryptocurrencies, said, “What do we know about Solana? What do we know about XRP? The answer is zero. We know zero because the government doesn’t feel it should be regulated. We put them up…we put up lots of Enron.”

Also, in 2019 the @SECGov’s Framework for Digital Currencies stated that a virtual currency used for immediate payments is unlikely to be a security. What is #XRP used for? Immediate payments in 3-5 seconds, unlike #Bitcoin

The XRP community was riled up at the Mad Money host’s comments. Carlin, an XRP user, commented, “I was watching and was shocked at JC’s comments/bluster without a thought.” CryptoLaw founder and XRP holders’ lawyer John Deaton will not let Cramer’s rhetoric slide without an appropriate response.

Deaton responded, “The government that Jim claims doesn’t regulate XRP regulated it in 2015, and Ripple was forced to comply with U.S. banking laws like the BSA(Bank Secrecy Act).” The CryptoLaw founder further cited a 2019 Financial Stability Oversight Council signed off by Federal Reserve Chairman Jerome Powell and Former SEC Chair Jay Clayton, among others, highlighting XRP alongside BTC and ETH as virtual currencies. He noted that this same classification had been given by the U.S. Government Accountability Office (USGAO) five years earlier.

He noted XRP’s use in payments, stating that payment giant Moneygram registered with the SEC in the same year to utilize XRP in cross-border payments. He concluded, “Therefore, we know much about XRP, not nothing as you suggest.”

What Does The Poolside Accelerator Mean for POLS Holders?

Political commentator praises XRP as it has something…

Ripple also named one of America’s…

Will Ripple be defeated by the Securities and Exchange…

Ethereum developers have set March 2023 as a tentative…

Bitcoin price and other cryptos sink some, but not enough to…

The CyBall football play-to-earn game announced that it had reached an agreement to be acquired by Coin98 Labs, the…
Ethereum News

The planned Shanghai upgrade will be released in March 2023, Ethereum developers decided during the year's last All…
Bitcoin News

With Bitcoin recording a high in 2021, the crypto community has been expecting BTC to surpass $69,000. However, in…
Breaking News

In this week’s edition of Option Flows, Tony Stewart comments on a brief and short-lived buying spree as BTC+ETH…
Breaking News