The XRP price is unchanged today, with its current level of $0.378725 representing a modest 0.4% rise in the past 24 hours. The altcoin is up by 14% in the past fortnight but remains down by 16% in the last 30 days, as the ongoing fallout from the FTX bankruptcy continues to weigh down prices. 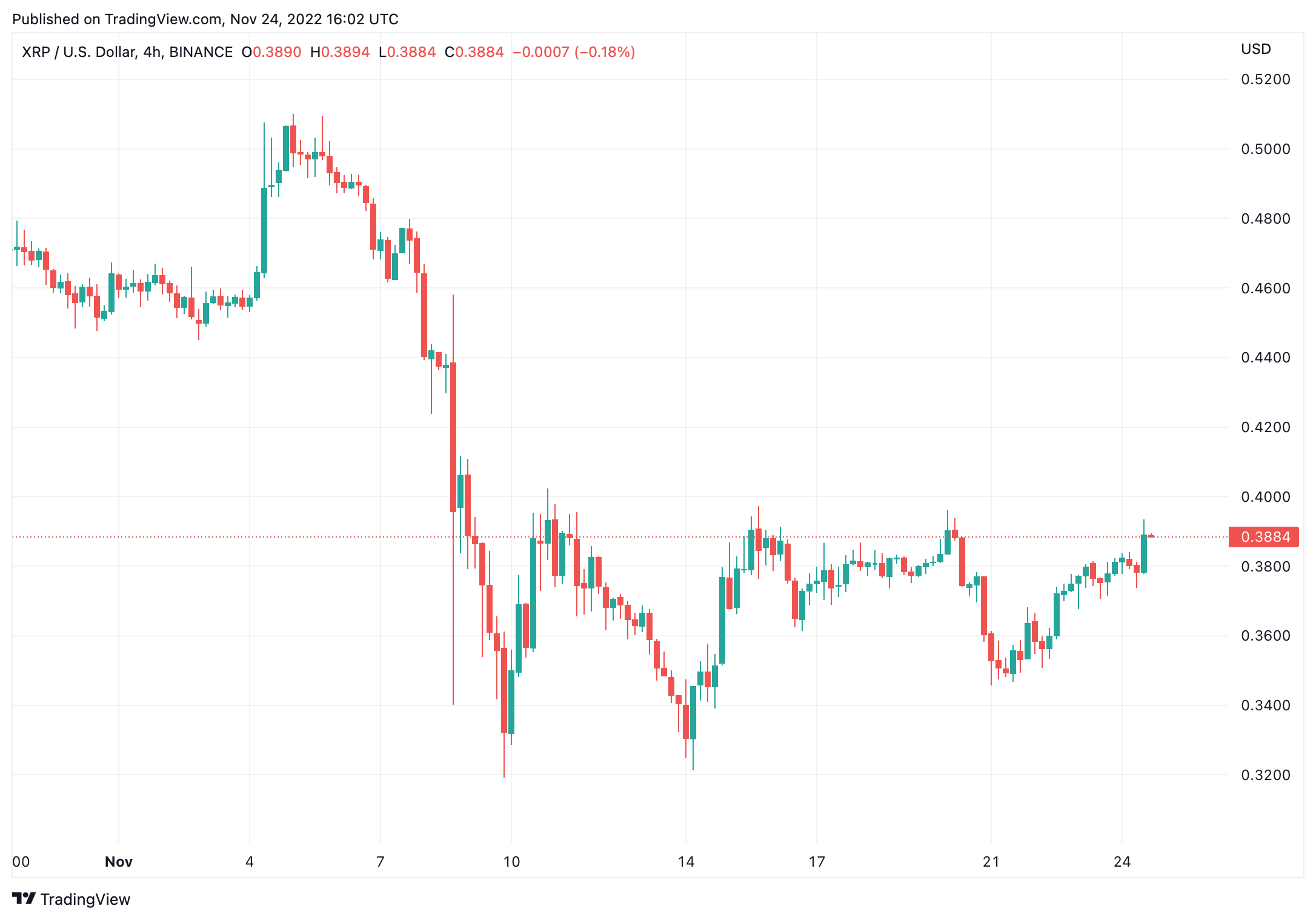 XRP’s price is also influenced by the ins and outs of Ripple’s long-running case with the SEC, with the coin falling a couple of weeks ago after LBRY lost a similar case. However, with Ripple succeeding in having 14 amicus briefs filed in its favor in the past week, its prospects continue to look positive.

As of writing, XRP’s 24-hour trading volume had reduced to $1 billion, having stood as high as $3.5 billion earlier in the month when the FTX crisis came to a boil. This indicates a decline in volatility, which can be both positive and negative, depending on your viewpoint and the current state of the market.

XRP’s price chart provides a mixed picture in terms of its indicators. Its relative strength index (purple) has recovered from under 30 earlier in the month to around 45, indicating a slight recovery in momentum and buying interest. However, XRP’s 30-day moving average (red) continues to fall towards its 200-day (blue). A crossover could indicate further falls, particularly as trading volume — indicating investor interest — is also tailing off.

Making the situation worse is that the aftereffects of FTX’s collapse continue to make themselves felt. Most recently, Digital Currency Group revealed it owes $575 million to distressed cryptocurrency firm Genesis Trading, which it owns and may reportedly file for bankruptcy in the coming days. Such revelations highlight the possibility that additional blowouts and collapses may come shortly, with the effect likely being further selloffs.

However, XRP itself has enjoyed some positive news over the past week. This includes Ripple successfully managing to have 14 amicus briefs filed on its behalf, in contrast to the SEC, which filed only one.

Accredify failed to file its Amicus Brief on behalf of the SEC by the deadline last night.

So that leaves the final tally at 14 for Ripple and 1 for the SEC.

For you Americans: Ripple scored 2 touchdowns and the SEC got a…one point safety? https://t.co/wGFfn4GNWR

This increases Ripple’s chances for securing a favorable outcome to its case with the American securities regulator, which has dragged on for nearly two years now, but which entered its final phase when both parties filed motions for summary judgment in September.

Ripple has also enjoyed other positive developments in its case. In March, the presiding court upheld Ripple’s right to use a fair notice defense, meaning that it can present evidence purporting to show that the SEC did not sufficiently warn it that XRP could be deemed a security.

In January, the same court also ruled that Ripple must gain access to documents and emails related to a speech given in 2018 by then-SEC Chairman William Hinman. Such docs likely contain discussions of the SEC’s stance on XRP, which could weigh heavily in Ripple’s favor.

As such, XRP remains in a good place. While the market is still weathering a difficult period, XRP could rally heavily if Ripple succeeds, with $3 or higher remaining a realistic longer-term goal for the altcoin.