XRP price is lack of strength during upside movements, indicating that further downside is imminent

XRP price continues to lag behind the rest of the market after a short-lived glimmer of hope brought prices to current levels in late July. And while crypto analysts expect the fourth-ranked cryptocurrency to outperform Bitcoin and Ethereum eventually, a sell setup has triggered on daily timeframes that could send Ripple ripping lower.

There are hundreds of technical analysis indicators available to analysts and traders – some are new and custom; while others have been around for decades and were built by financial market icons.

One such tool, the TD Sequential indicator, is among the most accurate across all of crypto, created by market timing wizard Thomas Demark.

It has successfully sniped several Bitcoin tops and bottoms and works just as well in altcoins and traditional markets. The indicator gives a sell setup after a series of candle closes meeting a specific sequence of requirements.

Typically, a sell setup comes after a string of upside. In XRP, however, there’s been just enough upside to trigger a TD 9 sell setup, but only barely.

Most of the price action in XRPUSD has been sideways on both the daily and weekly charts. The lack of a strong push higher has resulted in what is referred to as an imperfect setup. Only when a higher high is set on the 8 or 9 candles, is the setup considered perfected.

Although there’s enough upside in daily price charts to trigger the sell setup, zooming out to weekly timeframes shows just how stagnant XRP has been trading.

There have now been a total of six weekly candles where the body of the candle closed within a 6% range. Typically, when assets trade sideways for an extended period of time, a large, decisive move results.

A strong move to the upside would complete an inverse head and shoulders pattern on weekly timeframes, and begin forming an even larger right shoulder on monthly timeframes as well. The one thing standing in the way, for now, is this TD 9 sell setup on the daily, which could very well be the start of a deeper correction. Due to the extended sideways, and imperfect sell setup, however, a move higher cannot be ruled out.

At press time, XRP is trading up marginally at its current price of $0.25. This is a slight rise from its weekly lows of over $0.23 set during its latest dip, but it is important to note that this 10% rise marks a serious underperformance of many of its peers.

Throughout the past month, XRP has struggled to garner any sustainable momentum as it ranges between $0.22 and $0.26. The upper boundary of this range has been quite intense, with each visit here sparking harsh rejections.

Crypto analyst Loma believes that XRP is crippled from a technical standpoint, with its lack of buying pressure not allowing it to match the momentum seen by the aggregated crypto market.

He now is looking to offload his long positions as soon as the crypto reaches its next key resistance level:

“Stupid thing has moved like 2% while everything moved like 10%. I…hate this coin with a passion and looking to sell the first resistance. Everything moves exponentially compared to XRP. Ripple is crippled.” 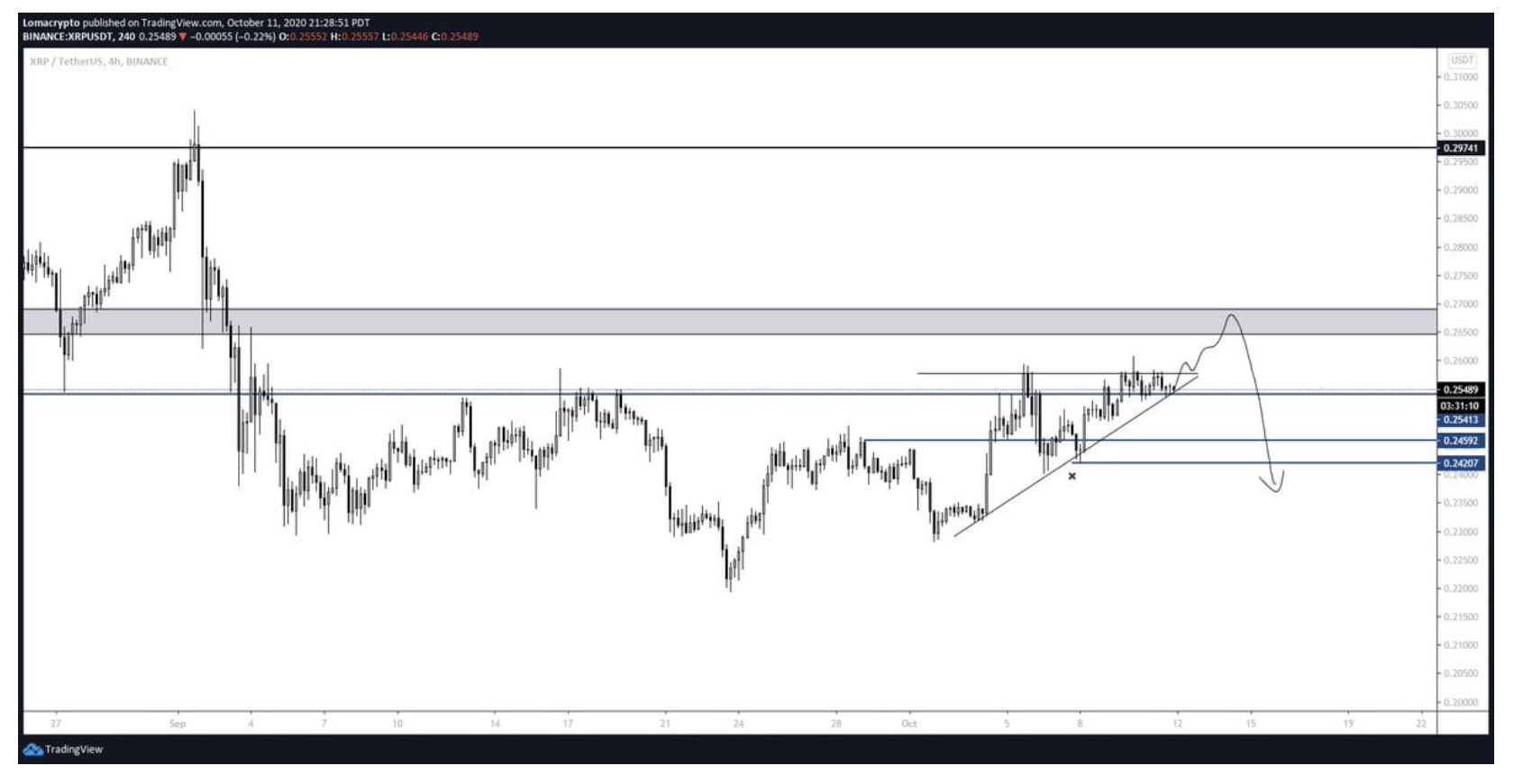 Because there are no immediate catalysts for XRP to see any intense upwards momentum, it may continue severely underperforming Bitcoin and the aggregated crypto market.

Ripple CTO sold tens of thousands of ETH, Bitcoin, and XRP investments well before they hit their peak

Ripple CTO David Schwartz said he and his wife decided to sell significant amounts of crypto starting in 2012, but several years later he was alone in his decision to sell his huge ETH holdings for a fraction of the second-largest cryptocurrency’s value today.

That amount of Ethereum is now worth $15.5 million. Ripple’s chief technology officer also shares that he regrets selling his BTC and XRP holdings for a price way below their current market value.

And then he added:

“My decision to derisk was made in 2012 or so when I discussed investing in cryptocurrencies with my wife. She insisted we agree on a derisking plan right then. And I must say that every bitcoin I sold for $750 or XRP for $0.10 hurt.”

Schwartz says the decision to sell his BTC, ETH, and XRP investments way too early are due to a certain character trait:

“On the derisking, I’m a risk-averse person with people who depend on me financially and emotionally. Fate caused me to put a lot of eggs in one basket… I like that basket. But the risk is very high in the entire cryptocurrency space. I’m just too rational to pretend otherwise and suggest others do the same.”

Despite his aversion to risk, Schwartz apparently has skin in the game, telling his 158,000 followers last month that he’s still invested in crypto.

SBI Group has got the first professional player receive…

Ripple launched its Line of Credit for customers using…

Chainlink price nearing the apex of a pennant formed in the…

Chainlink price has been struggling to break above $11.00 throughout the past few days and weeks. This level has…
Loading ... Load More Posts No More Posts