XRP price is moving near the lowest bottom level in the past three years, around $ 0.15. Over the past week, XRP has sometimes reached the $ 0.111 mark, a threshold that has not been seen since May 2017. This is a steeper move than the current developments from Bitcoin. So what happened?

Since 2017 with substantial market developments, XRP has not been able to maintain the momentum, even though this project has cooperated with many prestigious financial institutions such as SBI Holdings and Moneygram.

Since Ripple surpassed the $ 1 resistance in April 2018, XRP has never approached and tested this threshold again. Besides, this asset also formed five consecutive bottoms in the past three years. 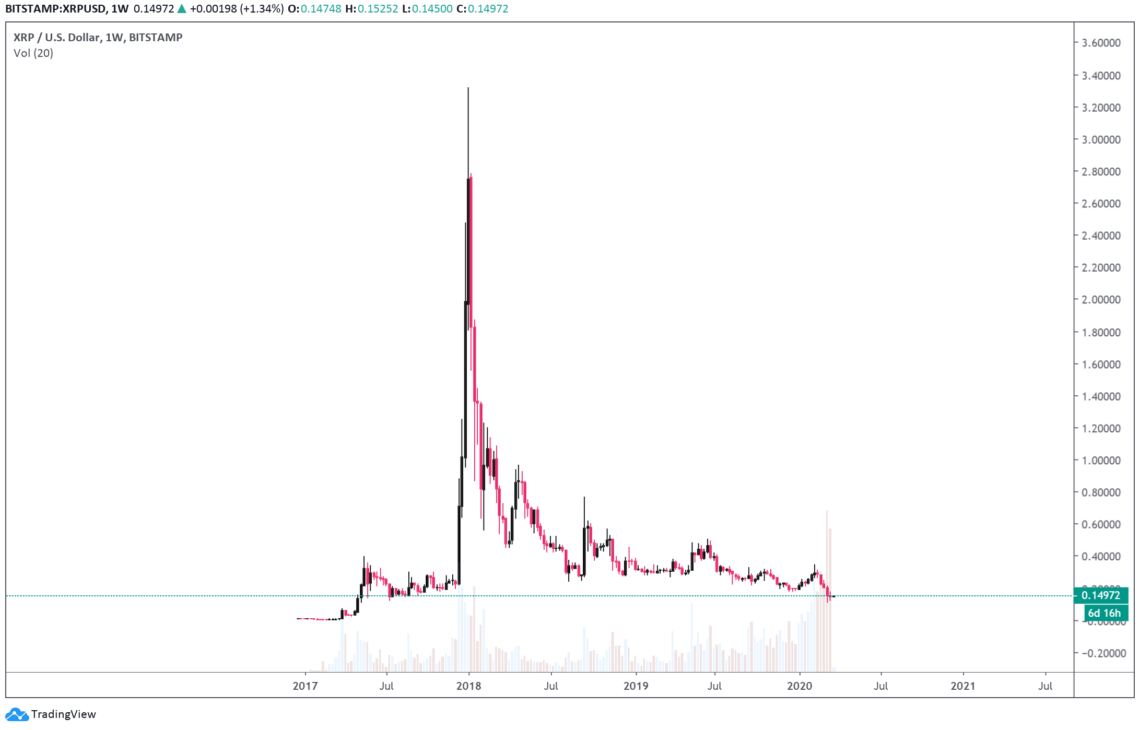 In theory, XRP should have surpassed many other coins in 2020, when Ripple’s token sale was cut. In the fourth quarter of 2019, Ripple witnessed a decline in XRP distribution sales to institutions as well as exchanges.

In an article, the company said:

“Last quarter, total XRP sales were $ 13.08 million vs $ 66.24 million in the previous quarter. In addition, Ripple continued the pause of programmatic sales, focusing solely on our over-the-counter (OTC) sales with a few strategic partners, who are building XRP utility and liquidity in strategic regions including EMEA and Asia.”

The decline in XRP sales may have triggered selling pressure on exchanges, though, in theory, this is the motivation for the token to recover. Despite moves from Ripple, the XRP has failed to break through significant resistance previously.

Especially at the time of the Corona outbreak, the plunge of the cryptocurrency was even more pathetic. When Bitcoin fell to $ 3,600, the XRP price hit unbelievable bottom of $ 1,114.

Is there any expectation for a recovery phase?

The current downtrend of XRP is quite similar to the beginning of 2017 before the Bitcoin market broke out sharply to reach the peaks of 20,000 and 23,000 USD (on Korean exchanges).

However, in the current context, when many assets are being sold out sharply, the recovery of XRP is doubtful if the world financial markets have not had positive moves.

While recent policies have not been able to help the market recover and regain confidence from investors, the cryptocurrency market will likely be stagnant in the coming months.

Nearly 108 million XRP have been deposited in the market

Huge transactions containing a total of 108 million XRP have been transferred in the past few hours, equivalent to $ 16,351,076. It seems that this transaction mainly takes place between major cryptocurrency exchanges.

According to the blockchain website Bithomp, Bithumb, Bittrex, Binance, and Bitbank of Japan are cryptocurrency exchanges that have participated in the transactions. In it, BitGo also participated, transferred money into the Bittrex wallet.

The most significant amounts – 46 million and 30 million XRP – were deposited between the wallets on Bithumb and the most extensive digital exchange, Binance.

Trader ‘Goomba’ is expecting XRP to make a bullish breakout after a ‘fork.’ The trader is going to short XRP as soon as it reaches the target.

I’ve updated/tweaked that fork by going to a lower TF and we see a breakout and retest, it should now start travelling towards the target$XRP pic.twitter.com/AYRVUXGEhm

As for traders on TradingView, Alex_Clay expects the third-largest currency to make some gains and rise to the $ 0.16092 mark.

“The price is close to the support level of the channel, and if we see a confirmed retracement, we can take a long position. for further action, we have to get a breakout.”

David_Smith, from TradingView, on the contrary, expects XRP to start sliding and reach the $ 0.14972 level.

He writes that XRP has broken out of the Rising Wedge pattern, which is often considered a bearish formation.

MoneyGram reports $11.3 million in revenue as a result…

Ripple partners with DeeMoney to revolutionize…

The value of XRP holdings has plummeted, meanwhile 212…

Ripple Labs may face more lawsuits after after the…