Market Analyst at an FSA Japan: XRP is losing its charm in Japan but no idea whenever XRP will ever reclaim its throne

According to official data from the Japan Virtual and Crypto Assets Exchange Association (JVCEA), XRP is losing its appeal in Japan. In the past, there were times when XRP was even more popular than Bitcoin in this country of cherry blossoms.

XRP is losing its charm in Japan 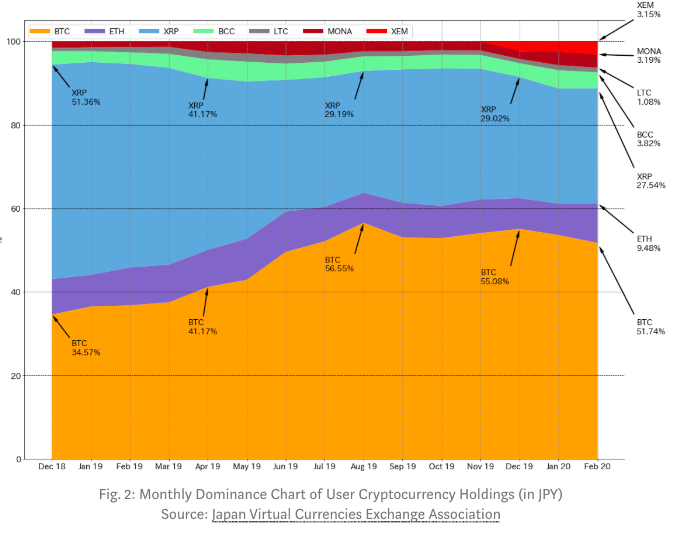 Yuya Hasegawa, a Market Analyst at the FSA, licensed crypto exchange BitBank, analyzed when XRP regained the throne. According to Hasegawa, one of the reasons Bitcoin overtakes XRP is probably the price difference. Since January 2019, Bitcoin price has increased by 152.79%, while XRP has only increased by 16.81%.

Hasegawa also suggests that XRP lacks a significant narrative in the region:

“The crypto market rally in 2019 was fueled partly by the ‘safe haven’ narrative associated with bitcoin, and the January 2020 rally was also due to a hedge against the geopolitical risk and expectation for multiple halvings scheduled in the spring (again, heavily related Ethereum also recorded high monthly traded value but it historically has a high correlation with bitcoin, and it is expected to go through a major network update, Serenity, sometime during Q3 of this year. Therefore, in a way, the popular narratives that drove the market for the past year or so have not precisely been shedding strong lights on Ripple’s XRP. ”

According to Hasegawa, XRP will continue to struggle for a short time, and the market’s attention will likely be kept hooked on bitcoin and Ethereum, because of the current global economic and financial situation. The Serenity update is coming up in the third quarter. In the long term, it is expected that the demand for XRP will return when the COVID-19 pandemic ends.

“As movements across borders are strictly limited, the demand for cross-border payments and remittances have an opportunity to grow. XRP’s issuer, Ripple, already has a scalable infrastructure to implement fast and cheap cross-border remittances, and its use cases are quietly growing in some parts of the world. ”

Together with over 40 global companies and nonprofits, Ripple joins the Open Payments Coalition to help drive innovation forward and simplify global payments for all. Discover the coalition’s #PayID, an exciting step for global interoperability. https://t.co/LU0WcxDftV

By allowing a world where money moves as smoothly as information, PayID promotes forward digital payments, simplifies global payments for everyone, and takes the world one step closer to Realize IoV. Ripple prides itself on being one of the alliances of industry leaders to help establish this much-needed open standard for interoperability so that IoV can become a reality.

All five BitClub Network are in custody but the unsealed indictments