Stagnation during a bull run has taken a toll on XRP, which has now been overtaken by the likes of Cardano, Polkadot, and even Binance Coin (BNB) in terms of valuation. 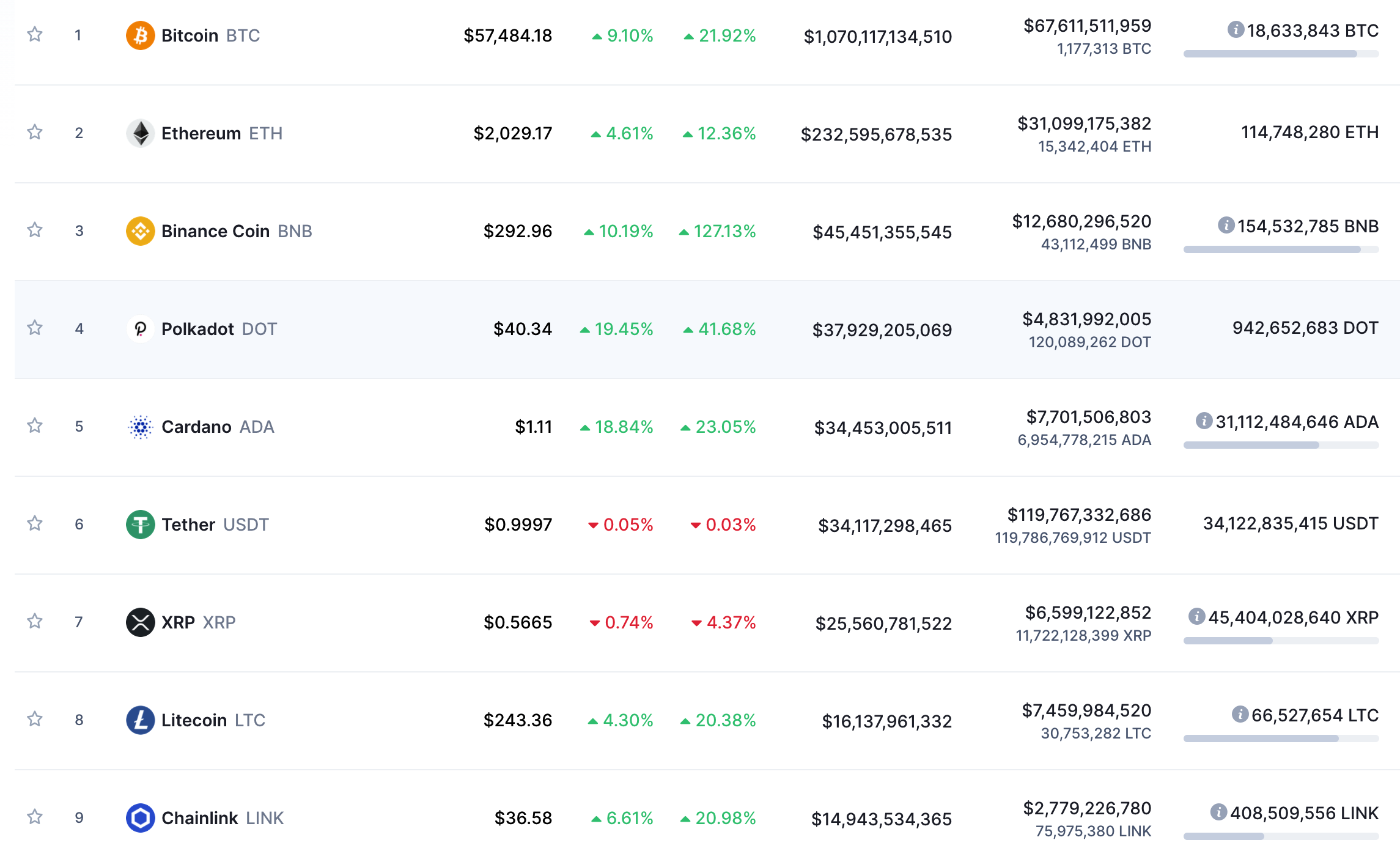 XRP has fallen out of the list of top five cryptocurrencies when ranked by market capitalization. Dwindling investor confidence and an uncertain future has caused XRP to slide to number seven, behind Binance Coin, Polkadot, and Cardano. XRP repeatedly challenged USDT for the #3 spot over the past several years. However, the recent sideways price movement has not done the token any favors — especially during a market-wide rally.

Ripple has found itself in hot water ever since the US Securities and Exchange Commission (SEC) sued it over securities fraud. In a press release issued Dec. 22, 2020, the SEC alleged that Ripple raised funds in an unregistered securities offering — worth around $1.2 billion in total. Two top Ripple executives, Christian Larsen and Brad Garlinghouse, reportedly also held personal XRP sales worth approximately $600 million.

The lawsuit was reportedly the final enforcement move undertaken by outgoing SEC Chairman Jay Clayton. He resigned from his post only a few days later, on Dec. 23, 2020.

In a rebuttal, Ripple’s Garlinghouse said that the SEC was wrong on both facts and its application of the law. A follow-up document released by Ripple stated that the XRP token was meant to be used as a functional currency, similar to Bitcoin.

The company also claimed that XRP does not pass the Howey Test, which would disqualify it as a security. Finally, they maintained that the digital token sale was never meant to serve as an investment contract.

While an early settlement was always unlikely for a case of this magnitude, the confirmation was enough to send XRP’s price tumbling. Between Feb. 14 and 16, the token dropped by 20% while the rest of the market enjoyed upwards momentum. Still, it is worth noting that XRP’s price has more than doubled since last month.

Early this month, a group of speculative traders called for XRP investors to ‘buy and hold’ the digital token. A now-deleted Reddit post on r/Ripple titled ‘Why the pump WILL work on Monday’ claimed the buying pressure would push XRP to new resistance levels. The post concluded:

“At 7:30 am CST on Monday, hundreds of thousands of people are going to be buying XRP.”

Indeed, two Telegram groups with 300,000 members between them advocated for mass XRP purchases at exactly the same time. This coordination managed to pump the token’s price to $0.75 — a two-month-high. Within minutes, however, the momentum reversed — sending XRP’s price and valuation tumbling. Nevertheless, it managed to find support between $0.30 and $0.40 over the next few days.

Today, XRP trades at around $0.56 — a far cry from its momentary high of $0.80 earlier this year. While both Ethereum and Bitcoin have surpassed their former all-time highs, Ripple is 80% down since its $3.40 high.

With a market capitalization of $25 billion though, it’s unlikely to be dethroned by the next largest cryptocurrency anytime soon. Litecoin, the cryptocurrency ranked eighth by valuation, has a nearly 40% smaller market cap than Ripple.

Major crypto trading platforms have moved 61 million XRP in lumps, while the coin holds at $0.57

Over the past sixteen hours, an aggregate amount of 61 million XRP tokens has been transferred by two major crypto exchanges – Coinbase and Binance – and a smaller one – Bitrue.

Coinbase has transferred 20 million XRP to the largest crypto exchange – Binance. Coinbase has also shifted 31 million tokens between its own wallets.

Bitrue has done the same with a ten-million lump of XRP. The total amount of XRP that was wired represents $33,907,358.

In January 2021, Coinbase suspended XRP trading after Ripple Labs and two of its highest-ranking executives – CEO Gralinghouse and cofounder Chris Larsen – were sued by the US securities regulator.

The lawsuit, however, did not include Jed McCaleb – the second Ripple cofounder who has been selling his XRP stash constantly paid out in small amounts by Ripple as part of the settlement agreement signed with McCaleb after he left the company in 2013.

As a reminder, Coinbase was also sued by the SEC for charging trading fees from illegal XRP trading.

Coinbase suspended XRP trades but users are still able to hold their tokens in their Coinbase wallets and withdraw them.

The US branch of Binance has also suspended XRP trading.

At the time of writing, XRP has been trading in the range close to $0.57 since February 14. The highest peak the coin has managed to reach so far this year was $0.71 on February 1.

The community believes that XRP holding this high despite the SEC lawsuit is a good sign for the coin. However, the regulator and Ripple doubt that a settlement may be reached.

Market sentiment is no longer optimistic as macro factors drag BTC down. >> View on OKEx Join us on…
Altcoin News

As AZCoin News reported, Ripple has filed a response on the case to the SEC, claiming that they did not sell or…
Loading ... Load More Posts No More Posts