According to CoinMarketCap, among the top 100 cryptocurrencies, XRP price has recently become the one that has made the most money. The price of XRP increased 7.5% during the time in question, reaching a peak of 11% growth. Among the top 10 cryptocurrencies at the time of writing, XRP displayed the biggest gains over the previous 24 hours. XRP, the seventh-largest cryptocurrency, is trading at $0.4, up 11% over the last 24 hours. 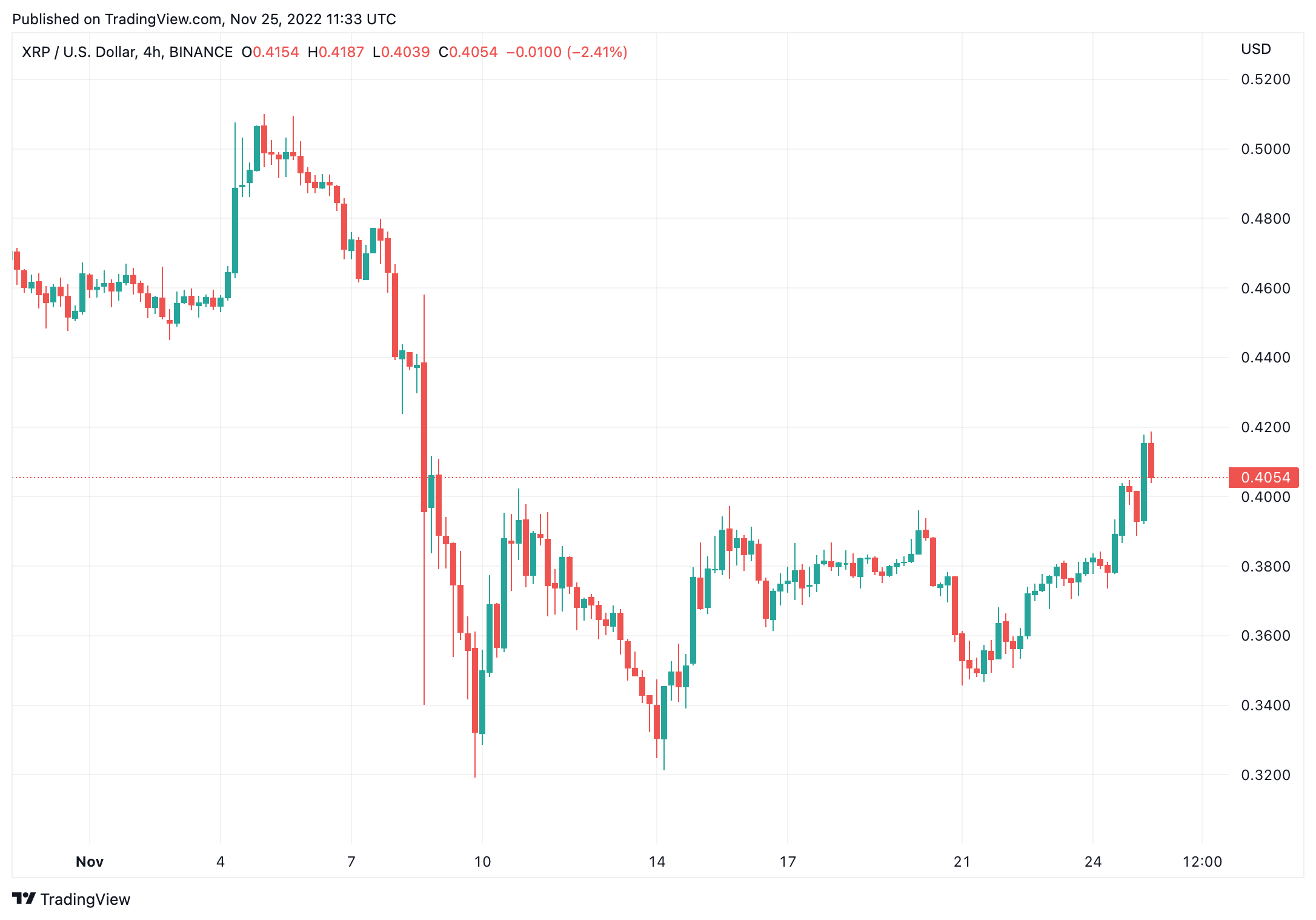 XRP’s 11% Rally Makes It Most Profitable Crypto of Last 24 Hours, Here’s What’s Next

XRP surmounted a significant resistance at $0.38 after two weeks of accumulation at the bottom during the collapse of the cryptocurrency market brought on by the FTX issue. Since the beginning of the week, XRP has increased by 13.61%.

In some respects, XRP was “doomed” to record positive price action yesterday, ahead of the most recent bounce, recovering more than a third, and by this point, two-thirds of the November fall.

The price of XRP should then move into the $0.5 range, where it remained throughout October before it was revealed that Sam Bankman-Fried and his linked structures had lost the cash of FTX clients. This assumes there are no further shocks, which the possibility of at this time seems questionable. The state of the cryptocurrency market as a whole, the progress and conclusion of the SEC action against Ripple, and other factors will all impact how XRP prices behave.

XRP remains one of most misunderstood cryptos out there

In the wake of JP Morgan’s first Defi trade, YouTuber Lark Davis, as Cryptolark, questioned the value proposition of XRP. CryptoLaw founder John Deaton has answered. A modified version of Aave, a significant Defi lending initiative, and the Polygon blockchain, which lowers the cost of Ethereum blockchain transactions, were used by JPMorgan Chase & Co. to perform its first live trade on a public blockchain at the beginning of November.

The SEC’s lawsuit, however, is not limited to Ripple sales. The SEC has alleged that all #XRP no matter who sells it, is always a security. This is what caused @coinbase @krakenfx, and others to suspend/delist #XRP. Yet, despite all of this, #XRP remains a Top 10 Crypto today.

Deaton also criticized the YouTuber for not understanding the distinction between Ripple and XRP. Despite the extensive history of the project, many people are still unsure of the connections between Ripple and XRP. On several occasions, members of the XRP community have had to refute the idea that XRP and Ripple are interchangeable. XRP Ledger, which uses XRP as its native cryptocurrency, was developed by Ripple. The deployment of AAVE and MATIC by JP Morgan, he continued, does not affect Ripple’s business strategy. He also expressed amazement that XRP, despite being present and competitive for a decade, is still among the most misunderstood cryptocurrencies.