Why Bitcoin SV pumps by more than 45%?

Bitcoin SV, a hard fork from Bitcoin Cash, unexpectedly pumps by more than 45 percent in the 24 hours following the legal developments in Craig Wright’s legal battle with David Kleiman. 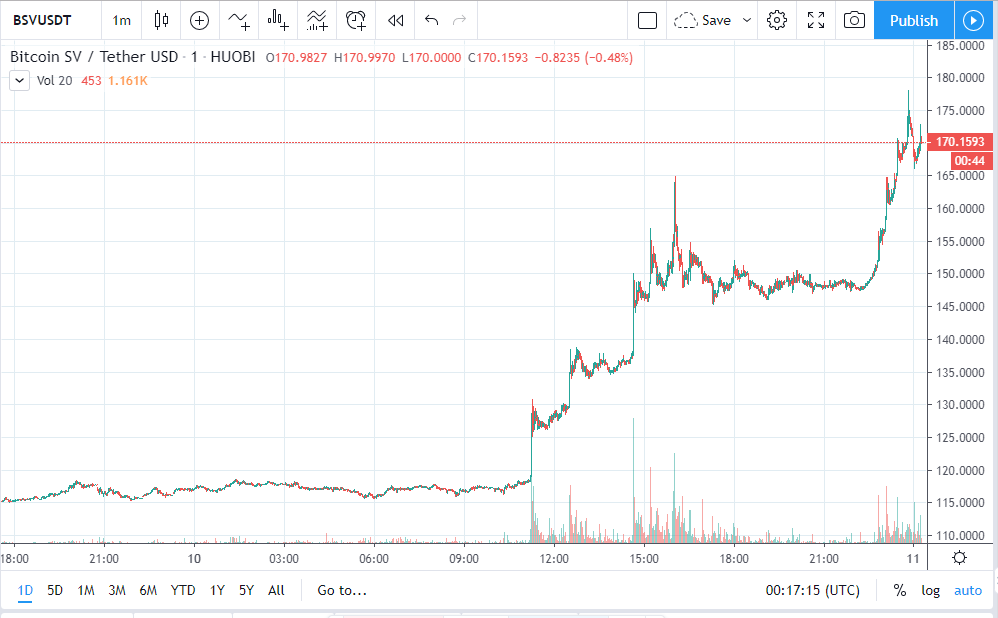 However, some essential troubles factors can make this rally out of breath and eventually lead to more downside in the future.

Wright is being sued by the brother of David Kleiman, who accuses co-founder of Bitcoin SV Craig Wright was stealing 1.1 million BTC mined by David Kleiman and Wright, saying that after his brother died, Wright has appropriated all BTC.

Craig Wright sent the info about the “Tulip Trust III” in a document dump of 428 dossiers.
BSV up to 40% in 24h pic.twitter.com/XlBAHdLTwy

Kleiman’s lawyers aren’t happy about that.

“In advance of today’s discovery hearing, Plaintiffs (Craig Wright) will be filing a Notice of Filing attaching a third Tulip Trust document that was not produced under this Court’s prior order to produce all documents related to the “blind” tulip trust,” they said in a filing. “Plaintiffs received this document for the first time on January 6, 2020, amongst a production of 428 other documents, without any explanation as to its late disclosure, or even an email pointing out this document had been produced.”

Although Wright flagged it as “confidential,” meaning he could ask for it to be sealed, Kleiman’s lawyers acquiesced to keep things moving.

Local rules in Florida give Wright 10 days to request a document be sealed. But, Kleiman’s attorneys asked for it to be done immediately. The discovery hearing to discuss the document was held later that same day to meet the cutoff for documents that will be considered during the trial.

Mining Bitcoin SV is not profitable for miners

There is no new information from the new profile yet, but this seems to be an excuse for “Bitcoin SV Whale” to make a 45% jump, and achieve a profit of up to 80% in just one week, the market cap reached over 3 billion USD. At the press time, BSV has dropped to 165 USD.

While it’s undeniable that the moment is a coincidence, crypto-assets like Bitcoin SV have been in a fairly long bear market and are in an oversold condition. The rallies are likely to break out of resistance levels and continue to push prices higher.

Although Bitcoin SV increased by more than 45%, the increase was not sustainable. Whenever a coin follows parabolic graphs and rallies with such a significant percentage, a deep retreat almost always happens when Whale dumps. The most important thing is when they dump.

In addition, mining Bitcoin SV is not profitable for miners at the moment, and with the asset’s halving coming before Bitcoin’s – which will cut BSV’s new issuance from a combined $600,000 to just $300,000 – miners are expected to operate at a further loss.

#BitcoinSV SV miners have made <$300 of combined fees over the past 24 hours. After their halvings, new issuance will be cut from a combined $600K to $300K. @BitcoinSVNode
Miners are already “irrationally” mining these chains at a loss. Both halvings will occur before BTC.

If miners start to suffer heavy losses due to halving, a deep sell-off can occur that makes the price drop sharply and the security in the blockchain network threatened by 51% attack will be easier.

The best hope for Bitcoin SV is that this rally continues and its price increases enough for miners to be more profitable and more sustainable.

Bitcoin Cash ABC (BCHABC), a sister coin of Bitcoin SV and also hard fork from Bitcoin Cash, also followed the rhythm of BSV when it increased more than 13% to more than 270 USD, this asset has also increased 40% in the 7 days. The cryptocurrency market also prospered with green covered the market, BTC, ETH, and XRP have increased more than 3% in the 24 hours. Block.one introduced EOSIO2, so it increased by 8%, reaching the psychological resistance of 3 USD.

Ethereum 2.0’s compiler Vyper has multiple serious bugs but 75% of the 29 bugs now been fixed

Here is a look at three issues that could spell trouble…