pTokens are the ERC-20 token version of other, non-Ethereum blockchain currencies that allow free liquidity to move from blockchain to blockchain.

pTokens is a cross-blockchain solution developed by Provable Things, formerly known as Oraclize. The system allows assets from different blockchains to be transferred to Ethereum and EOS, to provide them for Decentralized Finance (DeFi) applications. This is achieved by locking assets on the original chain and minting the equivalent number of pTokens on Ethereum or EOS. Assets can be moved back by burning tokens and releasing equivalent assets on the original chain. 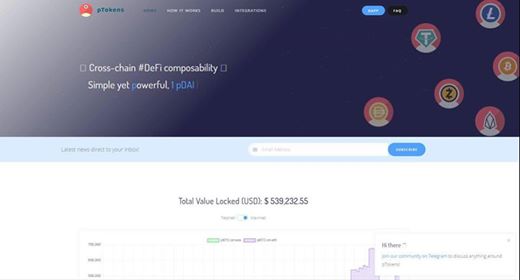 Cryptonics has been engaged by Provable Things to test the code base of the Bitcoin to EOS implementation prior to its mainnet release, after testing Bitcoin with the Ethereum Bridge. The interactive audit process has gone through many different rounds and they are delighted to announce the final audit results.

The pToken Bitcoin to EOS Bridge is a two-way bridge designed to run in reliable execution environments, such as Intel’s Security Software Protection Extensions. It includes a secure area containing Bitcoin and EOS light clients, transaction transition tools and a range of tools and APIs. In the first release, the bridge was deployed as a single trusted player node. However, a decentralized deployment is being developed for future release.

Portable
pTokens can teleport any tokens to a different blockchain, without frictions. Liquidity unchained!

Pegged
Every pTokens is transparently pegged to its trademark token. It is a trustless 2-way peg.

Powerful
pTokens build tools without barriers: the cross-chain composability is made by pTokens. They were made for DeFi.

Provable
A decentralized process makes everything transparent. Anyone can peg-out / peg-in via the pTokens DApp.

As for the Ethereum component, pBTC is implemented as an ERC-777 token. This is an ERC-20 compatible token standard developed leveraging OpenZeppelin’s standard smart contract.

All of pTokens are transparently pegged to an underlying asset.
Everyone can deposit on the relevant pTokens smart contract a certain number of the underlying asset (BTC or EOS) and request the equivalent 1: 1 pegged pTokens representation (pEOS or pBTC).

A network of secure sandboxes verifies the number of locked underlying assets and these combination mechanisms (via multi-party computation) pTokens. The new prefabricated pTokens are then available for users to play.

All pTokens are fully supported and their underlying assets can be redeemed at any time.

Anyone who holds pTokens can decide to destroy them to gain access to their basic assets. A network of secure sandboxes verifies the number of pTokens submitted and these jointly trigger the pTokens burning mechanisms. Basic assets are then unlocked and available to users.

pTokens Bridge takes a simple approach to allow the cross-chain movement of assets. Purposefully simple in design, the Bitcoin and Ethereum bridge features two light clients, one for the native blockchain (Bitcoin) and another for the host blockchain (Ethereum).
When managing funds, it is important to have a strong technology solution. Keeping the cross-chain bridges simple allows the audit system to be easier and carries lower risks of technical flow.

XRP price recent break above $0.22 has opened the gates to see a moonshot rally that sends it significantly higher

The Philippine central bank is considering issuing its own CBDC

What is Yearn.Finance (YFI)?

What is QLC Chain?