What is Hash Rate? Why does the hash rate determine the fate of Bitcoin?

Hash Rate or Hash Power is the term we often encounter in Bitcoin (BTC) mining circles in particular and cryptocurrency mining in general. The hash rate is very important for a coin’s network, because the decreases or increases of the hash rate will affect the entire operation of the blockchain network, and it is decided by miners. So what exactly is HashRate? What does the index mean for Bitcoin mining as well as other coins?

What is Hash Rate?

Hash Rate is a measure of the ability to solve algorithms of other cryptocurrency mining tools, including Bitcoin, Ethereum and other cryptocurrencies. Bitcoin mining is essentially a miner that will solve algorithms to confirm transactions on the network, so it requires a powerful hardware device that helps find the necessary hash in the shortest range of time as possible. The fact that a miner or miner group (mining pool) controls more than 50% of the hash rate of a network is a hacker attack, also known as a 51% attack. 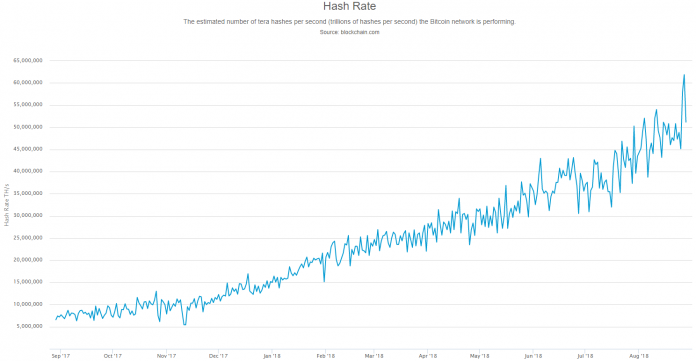 As we can see in the chart above, Bitcoin’s Hash Rate has been steadily rising from 2018 to 2019, although it has dropped to 50 quintillions from a peak of 62 quintillions in August 2018, it is still in a very strong uptrend. While the cryptocurrency market has dropped by 80%, the amount of Hash Rate has increased by 150% in the last 6 months. What does this mean?

Basically, the speed or power of a hash rate can be defined as the speed at which a miner can operate. Cryptocurrency mining involves finding blocks through a very complex calculation. Miners must generate thousands or even millions of calculations per second to find the right answer to solve the block.

In other words, in order to effectively exploit a block, miners must hash (divide) the block so that it is less than or equal to the “target” which changes according to difficult level. To reach a given hash (or target), the miner must change some block headers, called “nonce”. Each nonce starts from zero and is incremented each time to get the hash (or target) needed.

If we consider a nonce change to be a game of chance, the chance of receiving a given hash (or target) is very low. For a miner, he/she has to make many attempts by changing the nonce. The number of tests miners make per second is called the hash rate or hash power.

The unit of measurement of Hash Rate 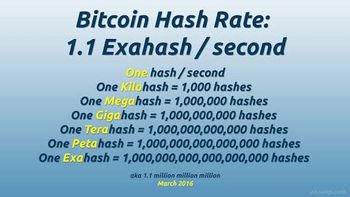 Different miners used to mine different coins and have different hashing rates.

Example: A Bitcoin miner has a different hash rate than the hash rate of Ethereum miner. This can be determined by the different algorithms used by cryptocurrencies because they don’t use the same amount of memory and computers to mine.

Here are some common values used for hash rates:

The hash rate of the current Bitcoin network is 50 TH/s. This ratio increases as more and more miners enter the market, which means that competition will become more and more difficult.

What does the hash rate mean?

“Successful technologies have to go through these stages and have a more natural and regular hype. In this case, perhaps the ongoing mining activity and the determination of the mining tools throughout the network are a very bright sign of cryptocurrencies over a period of widespread adoption. ”

Why is the Bitcoin price falling and the Hash Rate still rising?

According to Yuriy Avdeev – CEO of Blockchain platform CINDX:

“Of course, miners will not easily sell off the coins they have worked so hard to get them, ie they are accumulating coins in the long run. This cannot make the price increase immediately. With the current situation, the complexity of mining is increasing and the price of coins is decreasing incessantly; countries with low electricity prices such as Canada, Iceland, Russia or the southern countries will have better benefits because they are able to mine coins at a lower cost. The amount of Hash Rate did not even decrease but increased as a result.”

Another cause, given by Igor Lebedev – CTO of SONM:

“This is why mining is always an active market. If there are more miners, each miner will receive fewer rewards because the total reward of the day is fixed, so there will be miners that stop mining. Therefore, the remaining number of miners will receive a higher reward. In this way, there will be no cases where no miners exist. If more miners leave, others will jump in as the reward increases.”

Should we keep mining Bitcoin when Hash Rate is rising sharply?

However, you just confidently take profits from Bitcoin because the amount of Bitcoin you dig will not disappear even if the price suddenly drops. Profits can be affected, but the only way you can move forward among the countless other miners is to continue mining.

The hash rate, the number of rewards, and the competition in the market depend on each other in many ways. Interestingly, mining will be more difficult when more miners are involved in the mining network.

Therefore, the power of the hash rate has to be increased (ie, it is necessary to make many computational predictions per second to find a solution). This interesting correlation is implemented in the Bitcoin protocol itself so that the average blocking time is still 10 minutes.

When you have read here, some of you will have an intention to mine bitcoin by providing hashing power for the Bitcoin network. However, this is such an expensive and energy-consuming problem that almost nobody can do because it requires you to invest in expensive hardware, pay high electricity bills and require you to have well computer knowledge.

Ethereum’s Vitalik Buterin: Layer 1 base level can’t too powerful but need powerful enough to support the complexity of applications on layer 2