Dent is the main cryptocurrency in Dent Exchange, where people can buy, sell or give away their redundant mobile data to other users around the world. This means that through the use of Dent Exchange, data packets will be cheaper than their current market prices.

The company behind Dent coin, called DENT Wireless Limited, is a virtual telecommunications company headquartered in Hong Kong. The company’s goal is to free up mobile data online by allowing people to buy, sell and donate data through the Ethereum blockchain. Dent coin is located in the center of that market. It will be the common currency for the Dent Exchange data market the company wants to build.

DENT will open a new “Data Sharing Economy” where users can freely buy, sell and donate their mobile data, from one user to another. Dent Exchange acts as a market for mobile data trading like the stock market.

How does DENT work?

The DENT token acts as a digital commodity, powers the mobile data platform, provides access to the platform for telecom carriers around the world. Because the DENT token is built on the Ethereum blockchain belonging to the ERC20 token, the smart contract function is an important mechanism for DENT users to buy, sell and trade their data.

The main components of DENT include:

Data market: Users can use the DENT token to buy and sell data on international markets.

Data exchange: Although the DENT token has been listed on the Binance exchange, DENT also plans to launch its own exchange. That will increase the liquidity of the DENT token.

Community building: During this period, users need to hold the DENT token to participate in the community, in order to release data and change the way telecom companies are dealing with mobile data.

DENT was founded by a group of entrepreneurs and experts led by founder and CEO Tero Katajainen. Experienced founder and software architect founded DENT founded in 2014, creating FOREX trading platform with AI components to analyze market behavior. Highlights of the project include: 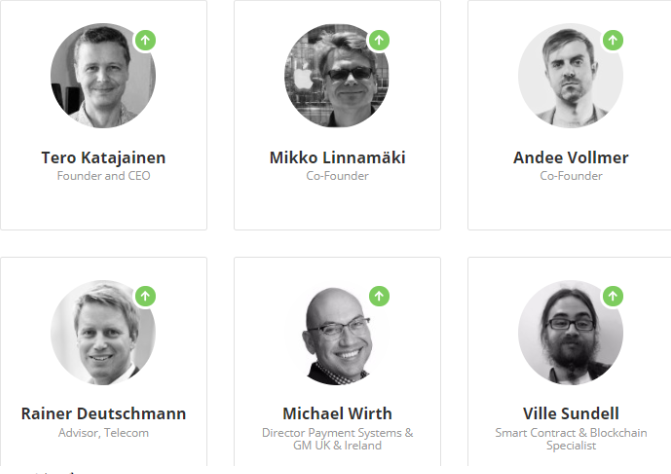 Tero Katajainen – CEO and founder of DENT. He holds a Master of Science degree in Electrical Engineering from Tampere University, Finland. He has a deep knowledge of FOREX Trading System. Tero is also one of the first developers to ever deploy mobile payment operators for consumer applications. A specialist for trading systems and Blockchain, Tero is the true leader of all technologies at DENT.

Mikko Linnamäki – Co-founder of DENT Wireless. He is the founder of DOVECOT Oy, the company behind DOVECOT, the most popular IMAP server company with a worldwide market share of 72%. An estimated 2.5 billion users store their email in Dovecot every day. Mikko recently received a patent for her invention “Ad Hoc Injection of IMAP Objects”.

Andee Vollmer – Co-Founder, Andee is a Mobile expert with 12 years of experience developing mobile applications, from Symbian in 2005 to iOS and Android today. Andee is the co-founder of German mobile application development company TDSoftware, which is developing applications for companies such as Mercedes-Benz, Audi, Deutsche Post, GLS and others. Andee is also an expert in mobile CRM systems, and will deploy the latest tools to analyze user behavior to accelerate user growth.

DENT aims to combine two important concepts:
One is to turn mobile data into a tradable commodity and the other is to create a free, global mobile data marketplace.

In addition, DENT is also implementing a service that uses Voice over IP (VoIP) protocol and an exchange dedicated to DENT tokens (to increase liquidity).

As can be seen, with the advent of DENT, the amount of wasted mobile data can now be tokenized, purchased, sold, donated and transferred across borders to users.

You can check DENT price here.