What is Bitcoin SV?

What is Bitcoin SV?

This change came along with contentious feedbacks, especially from prominent Bitcoin Cash developer nChain and its founder, Craig Wright. In response, nChain made its own proposal for a software upgrade, which they dubbed Bitcoin Cash SV (the SV being short for “Satoshi’s Vision”), which they argued would be closer to Satoshi Nakamoto’s original vision. On November 15th, 2018, Bitcoin Cash forked, which began an intense conflict between miners supporting Bitcoin Cash ABC and Bitcoin Cash SV respectively.

In April 2019, Wright registered himself with the U.S. Copyright Office as the pseudonymous author of the bitcoin white paper attributed to Satoshi Nakomoto. Despite the authenticity of the news, the price of BSV spiked over 90 percent. In 2020, Wright initially claimed that he had lost access to his wealth of bitcoins, but then said that he had found them. After the news broke, the price of Bitcoin SV spiked, more than doubling in value, though some speculated that this was due to a coordinated price pumping effort.

The differences between Bitcoin and Bitcoin SV / Bitcoin Cash 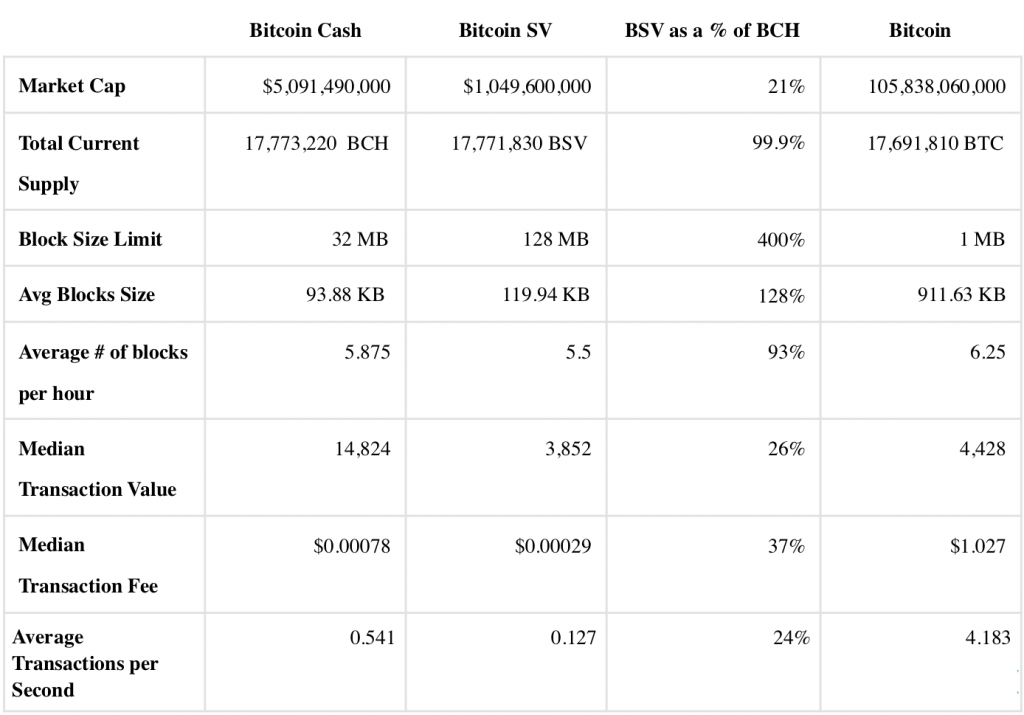 The 2019 comparison between Bitcoin and Bitcoin SV | Source: Sfox blog

To understand how Bitcoin SV is stacking up against Bitcoin Cash, we’ll compare the chains along three key dimensions:

Bitcoin SV hard-forked without replay protection, which posed an existential risk to Bitcoin Cash. This led miners on both chains to contribute hash power unprofitably.

Bitcoin SV’s 128 MB block size limit hasn’t seemed to impact adoption yet — and there’s also evidence that suggests that large blocks could introduce security issues to the chain. Both Bitcoin Cash and Bitcoin SV have larger block sizes than Bitcoin. For the most part, bigger blocks haven’t seemed to actually matter yet as transaction volume on both networks has remained low.

So far, actual usage in terms of transaction volume hasn’t lived up to this ideology, with both chains lagging behind Bitcoin. Both Bitcoin Cash and Bitcoin SV can process transactions more quickly and cheaply than Bitcoin, but that hasn’t seemed to matter in terms of adoption.

On July 24, 2019, Bitcoin SV’s network underwent an upgrade that resulted in a hard fork. Following the upgrade, 20 percent of BSV nodes failed to upgrade, and were still running the old software. This caused those miners to mine a total of 50 blocks without receiving mining rewards. A few weeks later, in early August, a number of nodes struggled to process a block containing 210 MB of data, preventing them from successfully processing transactions on the network. 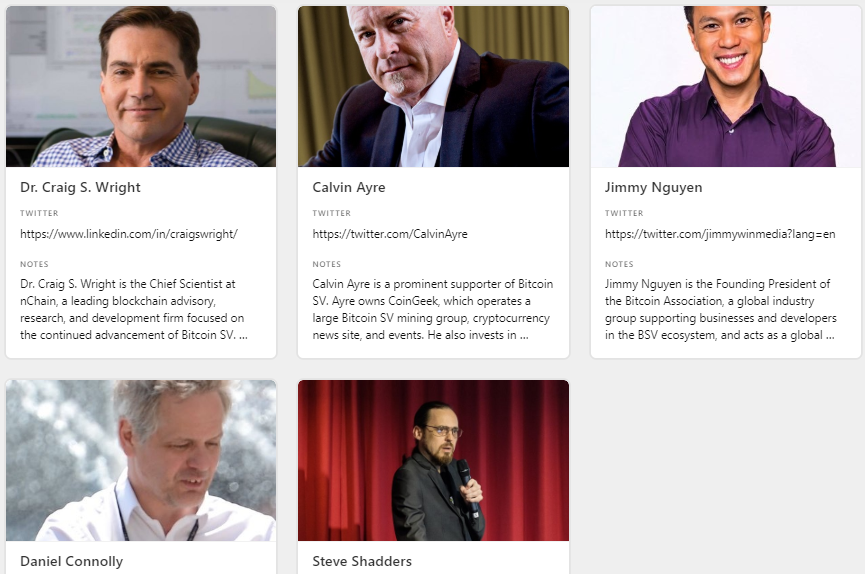 The team of Bitcoin SV

Dr. Craig S. Wright is the Chief Scientist at nChain, a blockchain advisory, research, and development firm focused on the continued advancement of Bitcoin SV. Wright was formerly the CEO of Hotwire PE, which planned on launching the first Bitcoin-based bank, as well as the founder of Panopticrypt, an IT security firm.

Calvin Ayre is a prominent supporter of Bitcoin SV. Ayre owns CoinGeek, which operates a large Bitcoin SV mining group, cryptocurrency news site, and events. He also invests in Bitcoin SV ventures. In addition, Ayre is the founder of the Ayre Group and the Bodog entertainment company.

Jimmy Nguyen is the Founding President of the Bitcoin Association, a global industry group supporting businesses and developers in the BSV ecosystem, and acts as a global ambassador for Bitcoin SV. He is also the Chair of the Strategic Advisory Board for nChain Group (and its former CEO). Formerly, Nguyen worked as an IP and digital technology lawyer in the U.S. for 21 years.

Daniel Connolly is the Lead Developer of the Bitcoin SV Node project (the development group for the Bitcoin SV full node client software). Connolly has an extensive background in enterprise software and IT engineering, including 20 years of developing secure, efficient, and reliable enterprise solutions for United Nations organizations.

Steve Shadders is the Technical Director of the Bitcoin SV Node project and the Chief Technology Officer at nChain. Shadders has been a contributor to Bitcoin infrastructure since 2011; he is one of the first authors of the open-source mining pool software “PoolServer” and was at the forefront of implementing new features such as merged mining and local Coinbase generation that are in common use today. Shadders was also one of the earliest contributors to Mike Hearn’s Bitcoin project.

While the Bitcoin / Bitcoin Cash fork was acrimonious, the two chains largely went their separate ways after the split. For now, both chains seem to be happy to go their separate ways. Bitcoin Cash seeks to fulfill what it sees as the original promise of Bitcoin as a fast and cheap electronic cash system. Meanwhile, Bitcoin SV sees Bitcoin as a scalable blockchain layer that businesses and enterprises can build on top of. Only time will tell which of these visions will win out.

You can trade Bitcoin SV on Houbi exchange here.

Bitcoin price hit $ 10,000 for the first time since November, Bitcoin SV increased by nearly 24% on the day

Market sentiment is no longer optimistic as macro factors drag BTC down. >> View on OKEx Join us on…
Altcoin News

As AZCoin News reported, Ripple has filed a response on the case to the SEC, claiming that they did not sell or…
Loading ... Load More Posts No More Posts