Large cryptocurrency wallets have allegedly dumped a startling quantity of XRP tokens over the previous 16 hours, claims Whale Alert. The greatest of these XRP portions totals over 222 million tokens.

The aforementioned cryptocurrency tracker revealed details of four successive transfers of 48,700,000, 34,000,000, and 32,000,000 XRP. Additionally, 221,500,000 XRP tokens—a massive amount—were transferred between wallets that Whale Alert flagged as “unknown.” But according to Bithomp, an analytics tool specializing in XRP, those 221.5 million XRP were taken from a wallet connected to the Binance exchange. The location was the Bittrex marketplace in the United States.

The remaining transfers also contained Bittrex wallets. Whales pushed 34,000,000 and 32,000,000 XRP into wallets on Bitstamp. The cost of XRP, the sixth-largest cryptocurrency, has increased by about 4% during the last day. This surge continues the token’s seven-day overall increase of approximately 10%. 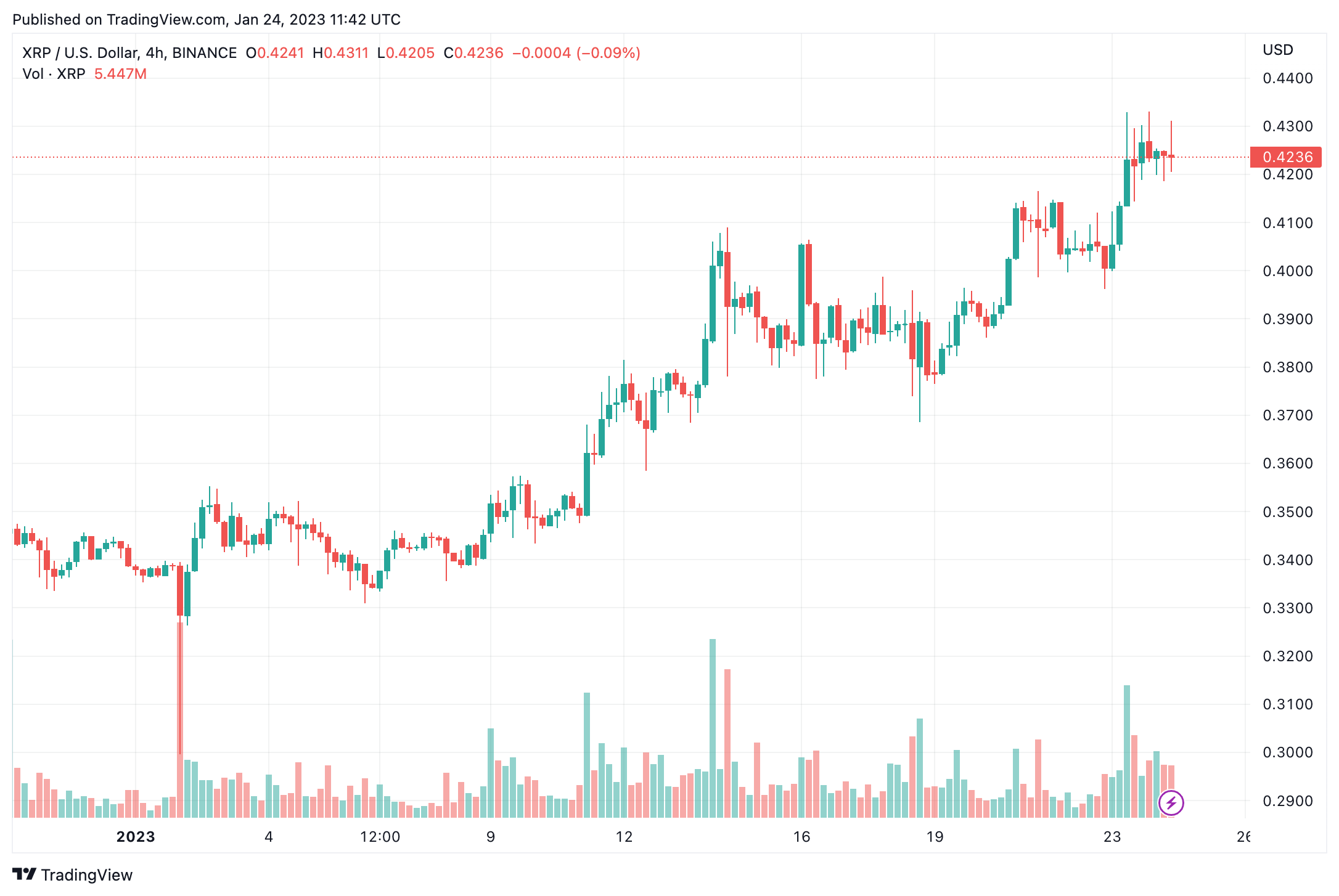 At the time of writing, XRP is trading for $0.4236. The recent expansion of the leading cryptocurrency, Bitcoin, is one of the primary causes of the increase. It managed to cross above $23,000 over the weekend temporarily.

According to CoinShares’ most recent analysis on capital inflows into investment products with a focus on cryptocurrencies, XRP was able to close the prior week once more in the black. This time, $600,000 was invested in XRP-related products.

Remember that $3 million in January came into these securities, but then $300,000 more flowed out, and now XRP is attracting investor money. By the cryptocurrency market’s norms, the token responds modestly, rising barely 25% from its closing price in December.

Growing investor interest in XRP, supported by funds that ironically could also be its catalyst, fits very well with the SEC action against Ripple. Many personally involved anticipate that the matter will be resolved in the first half of 2023. Investors cannot ignore it as it becomes heated the closer the deadline arrives.

Last week, $37.3 million went into the market for financial products focused on cryptocurrencies. That is four times as much as the previous week, but there is a caveat. According to the data, the Short Bitcoin fund received $25.5 million, or 68% of the total inflows, which were bet on cryptocurrencies plummeting. At the same time, almost five times less money flowed directly into Bitcoin.

Bitcoin price holds steady near $23K for another day; Ether remains above $1,600

Ripple’s fate to be decided as legal decision…