Bitcoin price quickly regained $ 6,000 after losing this support on the morning of March 30, when analysts realized the price potential would fill the new gap in the futures market. The gap lies between around $ 6,300 and the closing price of Friday’s CME futures session at $ 6,680.

Bitcoin price increased by 3% after a brief dip

At press time, the Bitcoin price is trading around $ 6,300 – up 3% on the day. The last 24 hours have seen prices drop to a low of $ 5,870 after signaling weakness throughout the weekend. However, those things only existed for a short time with Bitcoin regained a foothold in a few hours.

Now, there is high hope that price action will still increase, allowing Bitcoin to close the gap with the new futures gap at the end of Friday’s session. The gap is between about $ 6,300 and the closing of the CME futures session on Friday at $ 6,680.

Bitcoin has very often returned to trading in the void left by futures markets – before its price volatility increased in mid-March, only a gap, much higher at $ 11,800.

However, for analyst Michaël van de Poppe, there is still a downward trend in Bitcoin, although the gap sets the upside potential.

The analyst says that the first level of support is held, and the price is pushed up. There is also the CME Gap, which is probably the reason why prices move so that it may close at the previous support level. 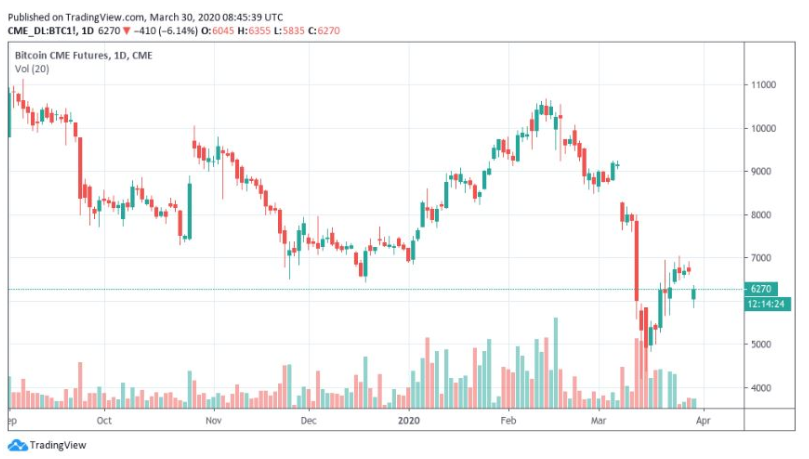 Bitcoin price likely reached its low when it hit $ 3,700 earlier this month

In the latest episode of his Trading Bitcoin YouTube series on March 29, Vays echoed its previous statement that, logically, the price of Bitcoin will bottom at 20% of the highest level in 2019 of $ 2,800. It is highly likely that this event will occur before Bitcoin Halving and does not jeopardize Bitcoin’s long-term future.

After March 12, when Bitcoin price broke out of the 15-month low of about $ 3,700, Vays thought that Bitcoin would not return to bring it lower.

“I don’t think able to likely anymore. Because I think this incident, this event earlier this month was close enough $ 2,800, that I’m no longer expecting $ 2,800.”

Since the bounce, Bitcoin has broadly maintained more top support, with the recovery reaching almost 90% in the subsequent two weeks. Vays said $ 2,800 would have appeared during the dive and that it was only the crashing of derivatives giant BitMEX, which prevented it.

“If BitMEX did not go down, we probably would have $ 2,800 and maybe even lower. It’s possible that if BitMEX didn’t crash, the selling would have just accelerated, but right now, I’m under the assumption that the low is print.”

At the time, BitMEX itself denied that it played a role in enabling a sell-off wave to end only when it was offline.