Uniswap become the first DeFi protocol to top $3.3 billion in total value locked but does it affect UNI price?

Uniswap still topped the ranking of TVL with a 23% market share. According to Uniswap.info, liquidity has hit a record of $ 3.3 billion, while volume is at $ 260 million per day. Nearly half of that liquidity is in Ethereum. However, there is growing concern that there could be an exit of liquidity from Uniswap when the distribution of UNI to these groups ends on November 17th. This could have a huge impact on UNI price.

There are currently 8.5 million, or 7.5% of the total supply, locked in DeFi and 3.3 million ETH on Uniswap alone in terms of ETH.

Messari researcher Ryan Watkins who has reviewed episodes on Uniswap, says that although they have declined slightly since September, its fundamentals are still solid.

Extrapolating Uniswap’s average daily volume over the past 3mo (~$375mm in volume) gets you to $68mm in earnings (once again assuming the fee switch).

Can do the math yourself to see how the market is valuing UNI right now.

Over the past 24 hours, that collateral has increased by 2.5% as liquidity in its four UNI farms has also increased. About $ 2.35 billion is spread across these four farms, with the largest stake in the ETH/wBTC group holding more than $ 810 million.

But, there are certain concerns

However, there is a growing concern that there could be an exit of liquidity from Uniswap when the distribution of UNI to these groups ends Nov. 17. This could have a huge impact on the price. UNI, which is currently up 15% on the day to reach $ 3.20. 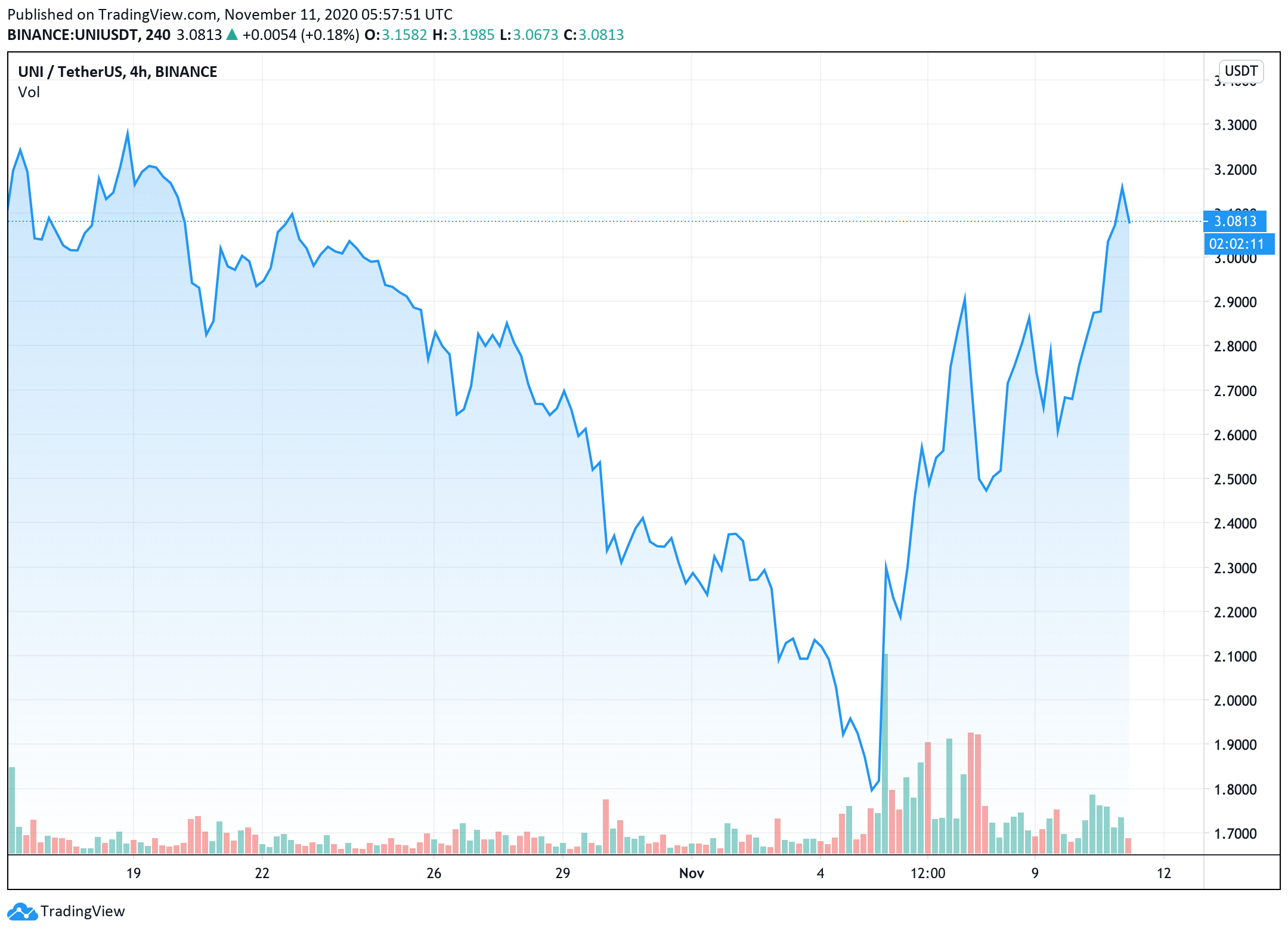 Uniswap will likely launch new farms for ETH/UNI or stablecoins and UNI, offering greater incentives than just sharing transaction fees to keep collateral on the platform. Nothing has been announced on any official channels as the countdown is only six days away.

Industry observers have suggested that the end of crop production creates an important moment of price determination for UNI.

Alpha in plain sight: in one week, the farm N dump pressure against $UNI will lift. Liquidity mining stops.

It will be interesting to see the price discovery then.

This is financial advice. Profit or your money back guaranteed (whatever money you paid me anyway). pic.twitter.com/vyxH2Nvear

The highly anticipated launch of Uniswap v3 is likely to open up even more impetus for UNI holders, which could also raise prices. Another side effect of a potential move of more than $ 2 billion in crypto collateral is a sharp increase in gas prices again. Average Ethereum transaction fees had dropped to around $ 1.60, according to Bitinfocharts.com, although the last time they rose to double digits was almost two months before Uniswap launched four farms.

Either way, there will be some volatility for Uniswap and DeFi next week. Therefore, keep an eye out for market fluctuations.

Ethereum infrastructure provider Infura is down, some crypto exchanges have begun to halt ETH withdrawals