Undefined: China is banning Bitcoin mining because of some crypto companies illegal fundraising

China Ban bitcoin mining.According to Wushuo,Sichuan sent out a internal announcement ask local governments to clean out crypto mining because the some companies are took advantage of recent announcements about local government supports mining for illegal fundraising. pic.twitter.com/hGnHr1wC51

Molly said, according to the information she received from Wushuo, Sichuan sent an internal notice, asking the Chinese government to cleanout crypto mining because some companies are taking advantage of recent announcements about local government supports mining for illegal fundraising.

Thus, it can be said that because some companies want to use the support of the government to profit for themselves, the Sichuan government feels very indignant. Even so. Molly also comforted the community that it was highly unlikely that the Chinese government would comply with Sichuan’s request because it was very typical that the government sent out a conflicting message in China.

However, China probably will not publicly support Bitcoin mining for a while. Although it is just an act to calm public opinion and the Sichuan government.

But Don’t freak out, it won’t happen, and it’s very normal that government sent out conflict message in China ,and they won’t really clean out, just won’t public support about it, and they will use big data to talk crypto mining Again .

At the bottom of Molly’s share are a lot of comments. Almost everyone thinks that this is unlikely because China is the leader in this market. And there is no reason for China to give up on the power.

China can’t ban mining cuz they are leading the way. Why would China give up on the power ?

Meanwhile, in Iran, Iranian President Hassan Rouhani has ordered the government to devise a new national strategy for the crypto industry, including mining regulation and mining revenue… 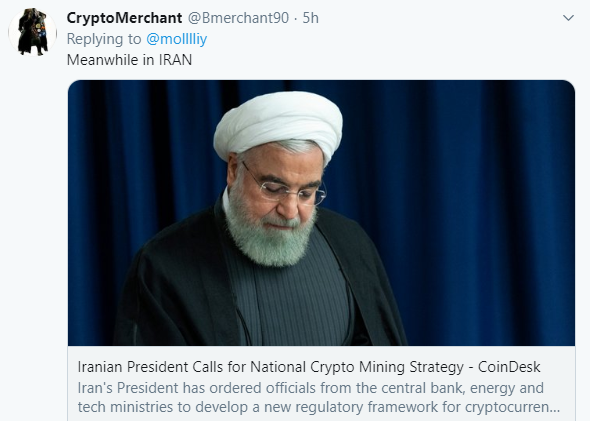 It is true that we cannot keep up with the thinking of the government. AZCoin News will keep you updated on the latest crypto events in China.

Messari has added Huobi, OKEx, Liquid, Bithumb, and UPBit into the top 10 by volume

Paxful, a popular P2P bitcoin exchange in the world based in the US,  that recently expanded operations in India,…
Loading ... Load More Posts No More Posts