Udi Wertheimer: Tron will surpass Ethereum in the battle for decentralized supremacy in 2020

2019 is a great year for Tron and Justin Sun to ensure they are always updated with enthusiasts about the great achievement of this famous project. Tron had its ups and downs, but overall, the project had some pretty important partnerships over the past year. Fans are looking forward to 2020 to see more success. 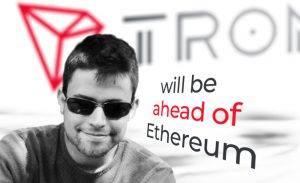 The man shared a video on Twitter from Tron founder Justin Sun, who is revealing a new partnership with cryptocurrency exchange Poloniex. He expressed confidence that Tron will surpass Ethereum in the battle for decentralized supremacy.

Watching @justinsuntron discussing Tron+Poloniex. Tron is *so* going to flippen Ethereum in the next year or so, it’s not even funny

All of the DeFi bois don’t realize it yet, but they’re going to work for Just when he acquires ConsenSys https://t.co/LqgAy1GsPJ

Wertheimer went on and explained in more detail the reasons he thought Tron was more efficient.

However, some Twitter analysts and commentators have speculated that Wertheimer is trolling Sun – claiming to be correlated with his Medium bio.

Gavin Andresen, a famous IT engineer, involved in the development of Bitcoin products in 2010, believes that to date, the most interesting things in the cryptocurrency industry have been built on Ethereum.

Gavin Andresen seems to believe that Ethereum is the best platform for dApps. In his tweet, he stated that in 2017, the most interesting thing about cryptocurrencies was CryptoKitties, and in 2018, it was PoolTogether. Both are built on Ethereum.

Bitcoin activist Udi Wertheimer suggested that Andresen should consider Tron to be the basis for something interesting in the field of cryptocurrencies.

Tron’s CEO, Justin Sun, participated in the discussion. He stated that Tron is currently the No. 1 platform for dApps. Sun asked Gavin Andresen to talk about Tron and how to build something awesome on it.

#TRON is No.1 #Dapp platform now! Happy to chat with you on how to build something amazing on #TRON! 🚀

Earlier, Justin Sun posted a tweet, saying that according to Dapp.com, four of the top five apps on its list were provided by Tron.

Dapp.com shows that these dApps are WINK, BETFURY (both related to betting), and Poloni DEX exchange (TRXMarket dex before). The number one dApp on this list is DLive. So far, it’s based on the LINO chain, but recently, Justin Sun announced that DLive is currently moving to Tron.

Tron has been competing with Ethereum and EOS for the past two years after both Tron and EOS jumped off Ethereum to enter their main network.

What is FETCH.AI (FET)? Find out in detail and in depth about FETCH.AI

TRON (TRX) outperforms Ethereum in terms of its USDT…

Tron has launched JustLink, the Oracle answer for…

Synthetic Bitcoin is live on Tron blockchain and it can…