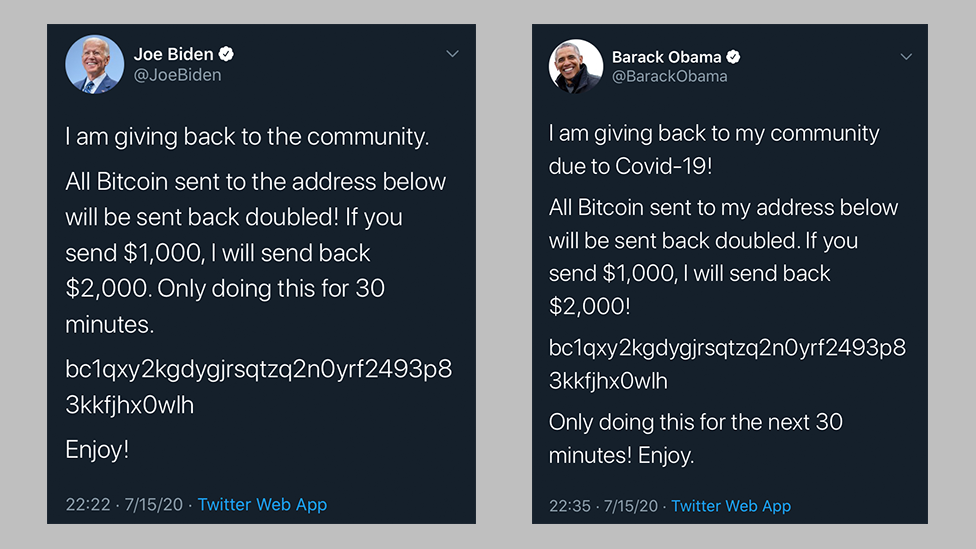 “I am giving back to the community,” some of the tweets stated. “All Bitcoin sent to the address below will be sent back doubled! If you send $1,000, I will send back $2,000. Only doing this for 30 minutes.” They are then followed by a code for a Bitcoin wallet.

Not only did they register the domain, they built a quick website, too.

Don’t send any Bitcoin to this address!

“Many popular Twitter accounts have been hacked, trying to convince people to send their Bitcoin to the address bc1qxy2kgdygjrsqtzq2n0yrf2493p83kkfjhx0wlh. Don’t do it! This is a scam, you will not get Bitcoin back. Never send Bitcoin to addresses you don’t trust. Be safe out there!”

The domain was registered with domain registrar Pornbun. Whois privacy is turned on for the domain, so we don’t know the identity of who registered it. However, we do know the Twitter user associated with the account — @example_dev — as he posted a link to his handle on his brand new PSA website.

Blockchain.com indicated the Bitcoin wallet linked in the tweets had been involved in more than 300 transactions, though it wasn’t immediately clear how many, if any, were donations from people who saw the “scam” tweets. The account had received Bitcoin valued at more than $117,000, according to the website.