It seems that when Ethereum is really new, its rivals are continually bombarding it. Recently, as AZCoin News reported, Bill Barhydt, the chief executive of Abra and a former Goldman Sachs and CIA employee, said the introduction of Cardano’s “Shelley” era would change Ethereum strong adoption. And recently, the co-founder of Ethereum has just had a rather harsh comparison between Tron and Ethereum.

In a Twitter fight, Vitalik Buterin said that Tron has ten times more flaws than his brainchild. Moreover, Tron has not been able to answer the question about Ethereum’s white paper copying.

Like, from any serious point of view, any flaw that ETH has from the perspective of BTC community values, Tron has 10x more. And yet, ETH is often a mortal enemy, and yet Tron, at least psychologically, is viewed as a distant crazy uncle it’s cool to be kinda friends with.

Elsewhere, Adam Back, CEO of Blockstream, joked that the Chon Foundation is likely to acquire blockchain technology company Consensys. If this were to happen, it would be a slap in the face of the Ethereum network.

Accordingly, this verbal war never ended when Tron getting a Twitter emoji before Ethereum made Reckless VR founder Udi Wertheimer once again display his love for the token. This sparked another debate with Buterin.

Buterin also uses a rather awkward comparison between Ethereum and Tron. In it, Buterin attached a screenshot of an article written by ‘Scott Alexander,’ the pseudonymous psychiatrist who took down his Slate Star Codex (SSC) blog and went dark after the New York Times threatened to doxx him.

I feel like this weird half-joking tron stanning in the BTC community might be a perfect example of this from @slatestarcodex: pic.twitter.com/4nQLDqeIwd

The six-year-old article that caught Buterin’s attention explores the baffling alliance partnership between Japan and Germany in WWII that was formed with the Tripartite Pact on Sept. 27, 1940. The author states that outgroups can become in-groups when facilitated, which Buterin used to make his argument.

Due to DeFi, the level of network activity on Ethereum has dramatically spiked. Although DeFi is clearly driving Ethereum adoption higher and giving the blockchain more fundamental value, ETH has yet to benefit.

According to Santiment, the number of newly created ETH addresses per day has just surpassed 100,000 again. The number of transactions, too, has continued to be higher. According to Etherscan, there have been many days in the past week in which 1,000,000 ETH transactions were processed. 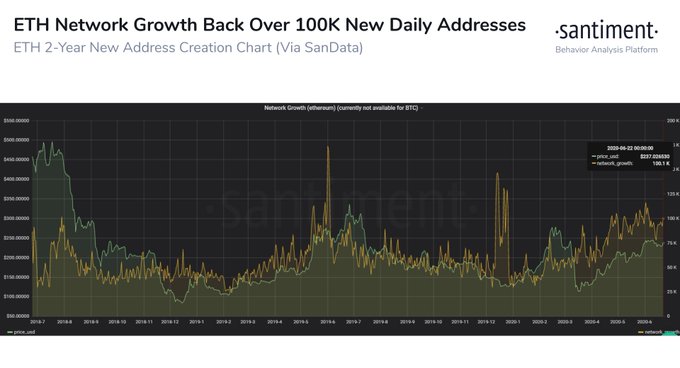 “Activity on the Ethereum blockchain is nearing levels not seen since the peak of the ICO bubble. ETH withdrawn from exchanges has hit a six-month high. It’s obvious that this activity is related to DeFi.”

In terms of why this is important, Weiss Crypto Ranking explains that DeFi is bringing real value to Ethereum, unlike anything we’ve seen before.

“Forget CryptoKitties, forget gaming — DeFi is where it is at.”

Ethereum transaction fees have continued to surge as…

Decentralized exchanges are booming in 2020, capturing…

Messari researcher is shining the spotlight on four…

The Medalla testnet for the phase 0 of ETH 2.0 was an…