Justin Sun – CEO of TRON’s marketing talent (TRX) – had a tweet announcing it but didn’t have any valuable information. Just like the time when Sun announced that TRON (TRX) would have a partner with a valuation of $ 100 billion. This time, he again said the company is cooking up a secret project that will bring multibillion benefits to the TRX ecosystem.

Will start a secret project for @BitTorrent & @OfficialDLive. Based on conservative forecast, this project will create at least multibillion benefits for $BTT & $TRX ecosystem and attract at least 100 million new users. Details to be released! #TRON #BitTorrent

It looks like Justin Sun is working on a secret project that will benefit billions of dollars for the TRX ecosystem. On January 12, CEO TRON promised his new DLive and BitTorrent project would bring multibillion benefits to the TRON ecosystem.

This is not the first time Sun has published such a notice. Sun has previously said his passionate project would partner with a corporation that seems to be priced somewhere around $ 100 billion.

#TRON will partner with a hundred billion USD megacorporation next week. It will not only benefit $TRX but all TRC10&20 tokens including $BTT & $WIN etc. It will broadly distribute #TRON Dapps and tokens to billions of customers. TBA. Make a guess?

Usually, what Sun announces on Twitter is almost 80% true. However, his exciting point is that Sun always seems to turn his message into a shocking news, enough to stir up the community from which pushed up the price of TRX.

The TRX price is still nothing special

Despite having the most significant number of followers in the cryptocurrency market, Justin Sun still feels inadequate. And maybe because it’s believed that the majority of Sun’s Twitter followers are fake. Maybe Sun bought all followers from a marketing services company. If this is true, maybe Sun is lonely and needs a lot of attention from the crypto community.

However, Justin Sun is not the first cryptocurrency character to manipulate social media for personal gain. Recently, a spelling mistake accidentally revealed the use of Binance Changpeng Zhao’s paid commentators on Twitter. 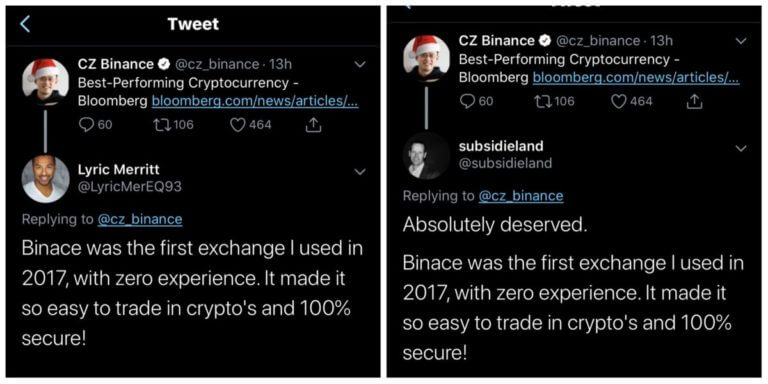 Two tweets with identical phrasing – and misspellings – made it clear a bot was in use. | Source: Twitter

Another identical tweet (seen below) was found afterward, taking the toll of identical misspelled bot-posts to three.

Binace was the first exchange I used in 2017, with zero experience. It made it so easy to trade in crypto’s and 100% secure!

Although Sun actively tweeted it, it did not help TRX price rise. Moreover, after TRX fluctuated throughout the day, it returned to the opening price at $ 0.014. That’s a far cry from the beginning of last year when a Sun announcement was enough motivation to drive TRX prices.