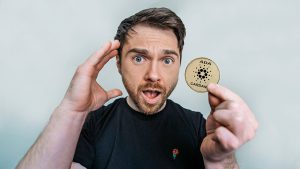 In the new video, Andrei Jikh explains to 1.34M of his subscribers the reasons behind Cardano’s popularity and its competition with Ethereum to become the best platform for smart contracts.

The first problem with Ethereum on Jikh’s list is exorbitant gas fees.

“Ethereum is too expensive to use, imagine a car with a driver in it, anyone can get in but each interactive action from opening the door, getting in, how far you go, and even getting out of the car costs gas called GWei, a small unit of Ethereum. You can imagine when you’re creating apps, testing the network, or creating a business on top of Ethereum, it becomes prohibitively expensive to do even the smallest of things.”

As Jikh points out, the way Cardano solving this problem is by making their blockchain proof-of-stake rather than proof-of-work.

Ethereum’s second problem is scaling. The trader explains that scaling is cryptocurrency’s way of competing with Visa, Mastercard, AMEX as a settlement layer.

“The reason credit card companies can do this is because they operate based on a private database which allows them to play by their own rules. The truth is, decentralization comes at expense of network security. That’s the fundamental problem of all blockchains and by extension – cryptocurrencies.”

Cardano then steps into the game and provides the solution for this problem by decentralizing with proof of stake.

The last problem on Jikh’s list is interoperability which is “the pursuit of creating some universal language that allows the crossover of blockchains”, the trader says.

Regarding this problem, Cardano is trying to solve this by doing like what Amazon’s AWS is doing.

“The best real-world use case of this is Amazon’s AWS, which is just a technology that allows other companies outside of Amazon to integrate it into itself which allows them to scale easier and quicker and actually helps them without destroying the network the security of amazon itself”.

” That’s what Cardano is trying to do with things like sidechains and other concepts so that it can help other cryptos integrate technologies to help them scale and grow. Cardano wants to be a team player. And that’s why I like Cardano.”

Bitcoin price once again broke the $ 51.000, leading to the rapid growth of many other cryptocurrencies