TO THE MOON – XRP pumps 50%, analysts think the token could move even higher

XRP has surged dramatically higher in the past day. The Ripple’s token is up 50% in the past 24 hours, making it the top-performing crypto asset in the top 100 by market capitalization. That’s no joke, XRP, a coin that has almost continually been bleeding out since the 2018 highs, has gained 50% in a single day.

Joe McCann, an engineer at Microsoft and a prominent crypto-asset analyst, recently shared to his Telegram channel that XRP just confirmed a bullish MACD crossover. The MACD, or Moving Average Convergence Divergence, is a popular technical indicator that attempts to show an asset’s trend.

He thinks this is a sign XRP could move even higher in the new future. He notably did not explain on which time frame did the MACD cross positively for.

Analysts think that XRP could move even higher as it breaks out of macro downtrends, which had compressed the cryptocurrency’s price action over a number of years.

How high XRP will rally in the near term remains to be seen. Though, many are confident that a followthrough will take place as the cryptocurrency moves up 40% in a single trading session.

MacroCRG, a popular trader on Twitter said in September “all-in” in XRP at $0,24, today he retweeted his shared and update XRP chart “to the moon”. 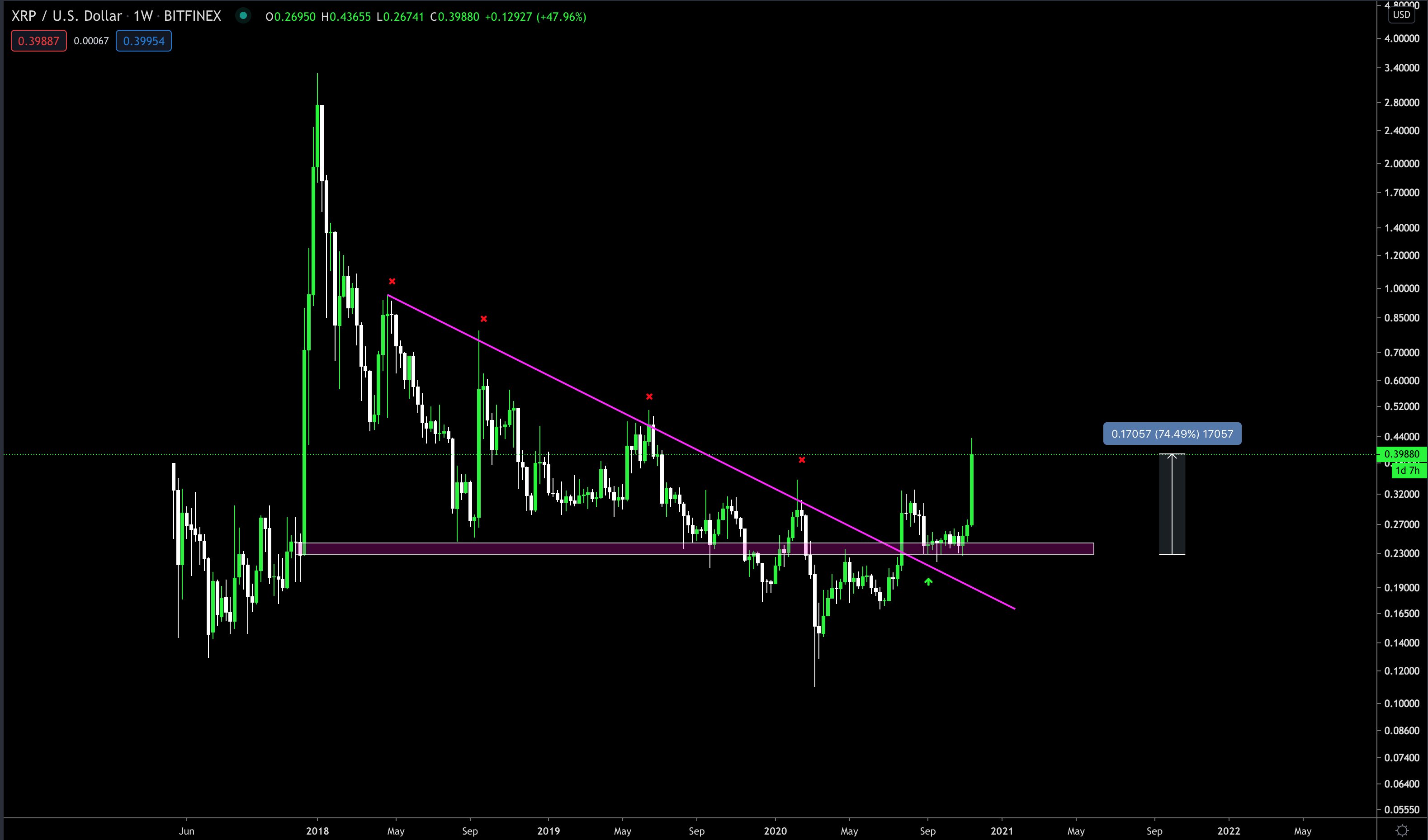 Bagsy, another analyst believes that the embattled token has some room left for further gains in the near-term.

He is specifically watching for a move up towards $0.46, noting that this is the next key resistance level it faces.

“XRP update: I love it when a trade works out as quickly as that. I think we’ll see a pullback into 0.38c from here followed by another leg in 0.46c.”

Ripple’s XRP remittance platform has the potential to streamline and boost the speed of international payments, according to a new report from a London-based financial think tank.

The Official Monetary and Financial Institutions Forum (OMFIF), an independent think tank for central banking, economic policy and public investment, highlights Ripple’s efforts to position itself as an alternative to financial messaging service SWIFT in a new report on the role of blockchain in banking.

The bank only has to hold its domestic currency and maintain one account with XRP, with only enough XRP to service its largest expected payment obligation. The process minimizes the number of intermediaries and their markup on spreads.”

The report says Ripple’s crypto-based solution could further benefit banks by allowing them to avoid exchange rate and processing fees.

Pickle Finance was hacked to the tune of almost $20 million

A move up towards the $0.7 for XRP price is imminent in…

XRP price is expected to move higher in the days ahead…