The XRP price has risen more than 25% by 2020. However, it seems the fourth-largest cryptocurrency by market cap is still looking to dampen that already modest capital gain.

Based on three technical factors: Long-term moving average, Bearish Divergence between price and momentum, and the death cross. Together, all three exhibits an extended bearish rally towards $ 0.15, the familiar level of support below 35% from current rates.

At first, TradingView’s analyst focused his analysis from a trace of the lower highs and lows left by the XRP/USD pair since 2018. The pair recently broke out of the channel down (in blue), but a robust bullish rejection near the 200-week MA threatens to push it back in the range.

“You can see that price first fell below 200-WMA (in purple) in the summer of 2019. XRP has consistently failed to rally back above the 200-WMA. It has been rejected there on the past three major attempts.”

“That’s a bearish divergence that could lead to weakness in the coming weeks. Although, there has already been a breakdown of the divergence on the RSI.” 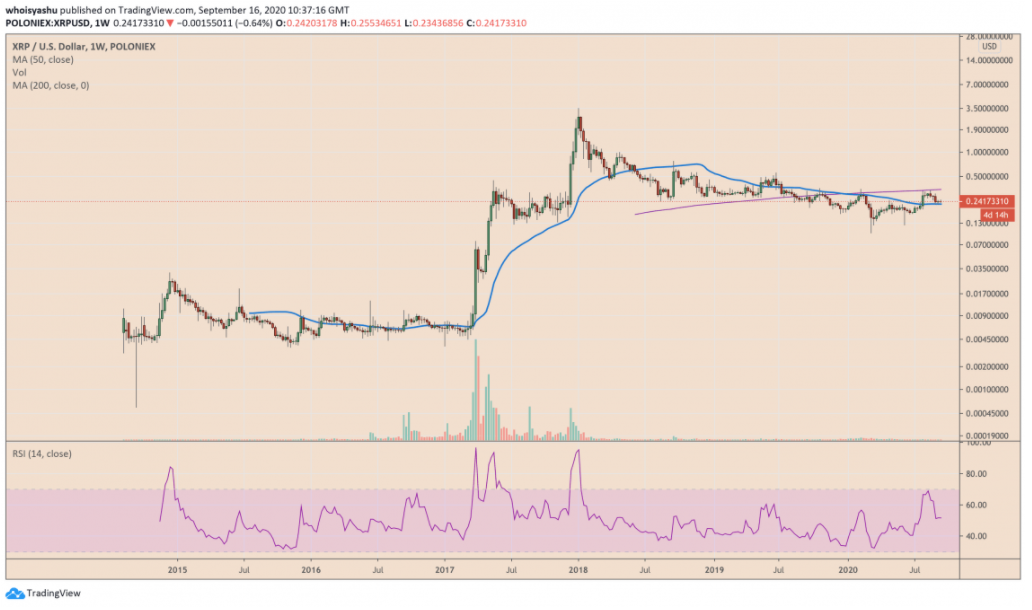 In addition to these three reasons, lower trading volume and volatility also put XRP’s latest bullish move into questionable periods. XRP has attracted fewer traders in the past two years. That could have to do with an ongoing class-action lawsuit against its parent company, Ripple Labs, over whether XRP is a security or not.