This anonymous cryptocurrency only takes 4 minutes to gain over 5,600% – Why?

It took just four minutes for an anonymous cryptocurrency to surge more than 5,600% on Nov.5, according to CoinMarketCap.

The core issue of the massive PHB pump was token migration and a technical glitch, which CoinMarketCap fixed with the PHB price now up a relatively modest 59%.

Specifically, in September, Phoenix Global announced that it will be porting its enterprise decentralized application solutions from the Neo blockchain to the Binance Smart Chain (BSC). At that time, the team also proposed to convert its NEO-based native asset PHX into PHB, a BEP-20 standard token, with the ratio set at 100:1 (100 PHX = 1 PHB).

The migration began on Nov.2 and effectively reduced Phoenix Global’s official token supply from around 3.5 billion to 35 million. Meanwhile, the move made the new PHB trade 100 times higher than the pre-swap price.

That caused chaos in CoinMarketCap’s calculations as it began comparing the value of the old coins with the new coins while considering their supply cap at 3.5 billion.

Thus, this leads traders to believe that PHB’s market valuation has increased 56x in less than 5 minutes, reaching $4.24 billion to become the 52nd largest cryptocurrency.

“The project has undergone a new renaming and this affects the highest volume market pair on an exchange.” 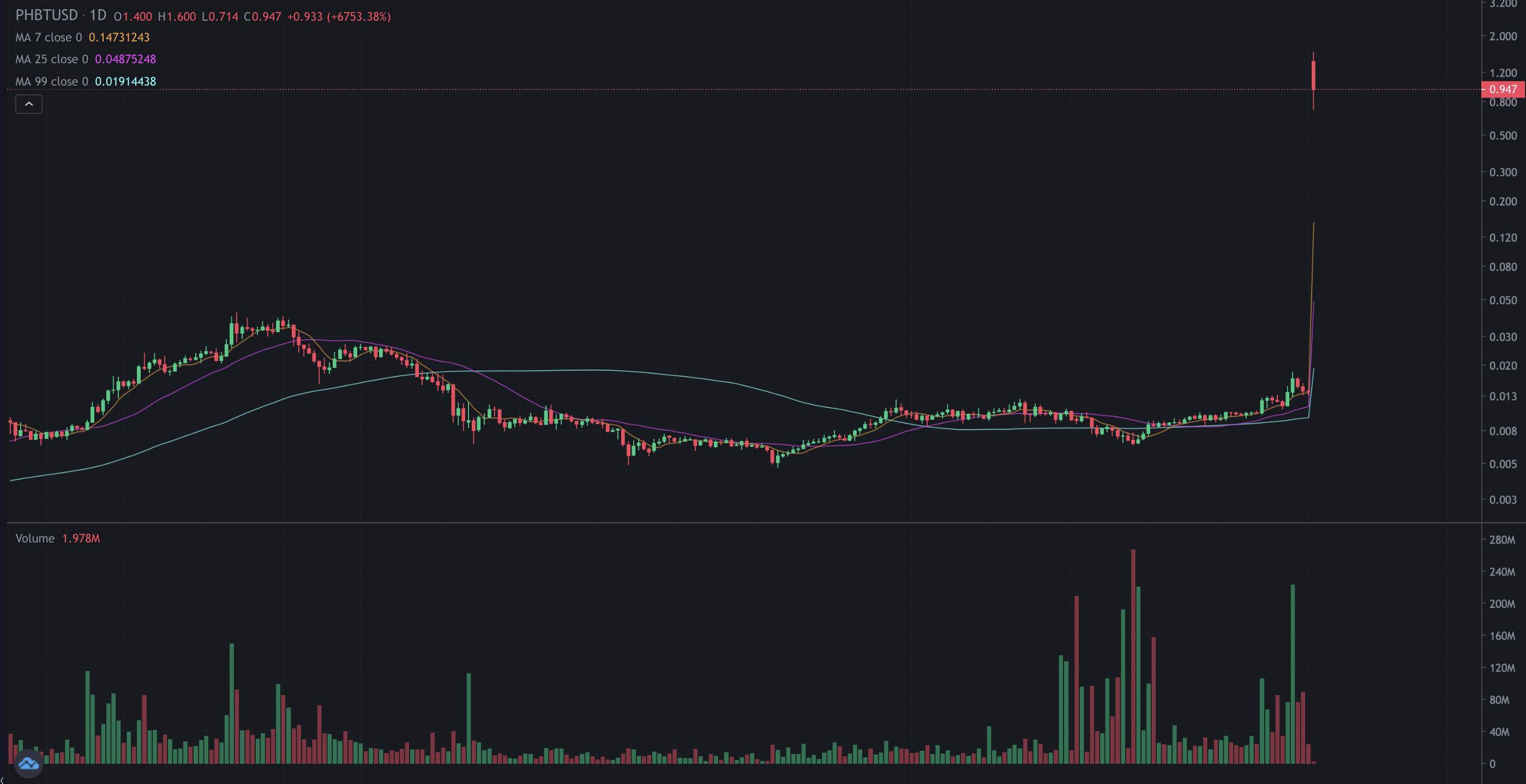 What Is Genopets (GENE)? The Third Project On Bybit Launchpad

How to Get Rich By Fantom (FTM)? Answered By Crypto…

Why The Crypto Metaverse Is About To Go Insane?

Top 3 Undervalued Cryptocurrency Are Set To Explode in…

Top 5 Potential Altcoins To Buy This Week, According to…

China frozen nearly $1 million worth of crypto assets and…

Bitcoin price and Ether go down and then up; altcoin prices…

Ripple continues sending XRP to Huobi on a regular basis…

Great Britain is aiming at regulating cryptocurrency and the…

There is a resurgence of 10 new Bitcoin whale addresses that…

How Cryptocurrency is the Future of Money?

MEXC is accused of dumping ELEMON Token (ELMON) and the…

How to Get Rich By Fantom (FTM)? Answered By Crypto Love

According to some reports, the official Shiba Inu Twitter account provided an update on the recent CoinMarketCap…
Scam News

China may have given up on the crypto race, but its campaign to crack down on related crime continues as police…
Breaking News

Bitcoin price failed to start a rally today. It started the day with a short-term downward spiral that led its…
Breaking News

Web3 has recently burst into the mainstream consciousness, with industry leaders across the traditional tech sector…
Ripple News

According to Whale Alert, in the past 10 hours, major crypto exchange platforms have transferred around 150 million…
Regulation News

According to Walter Bloomberg reports, the UK is moving towards regulating crypto and the DeFi industry in general.…
Breaking News

One of the most common requests we receive from customers is to be able to trade more assets on our platform. As we…
Bitcoin News

According to the on-chain analytics firm Santiment, there has been a resurgence of 10 new Bitcoin whale addresses…
Loading ... Load More Posts No More Posts