The U.S. government has held a total of 185,230 Bitcoin after many arrests and confiscation of exhibits from cryptocurrency criminals. However, it seems they lost nearly $ 1.7 billion when they were sold too early. Meanwhile, other governments have their Bitcoin holdings and have reaped the benefits. 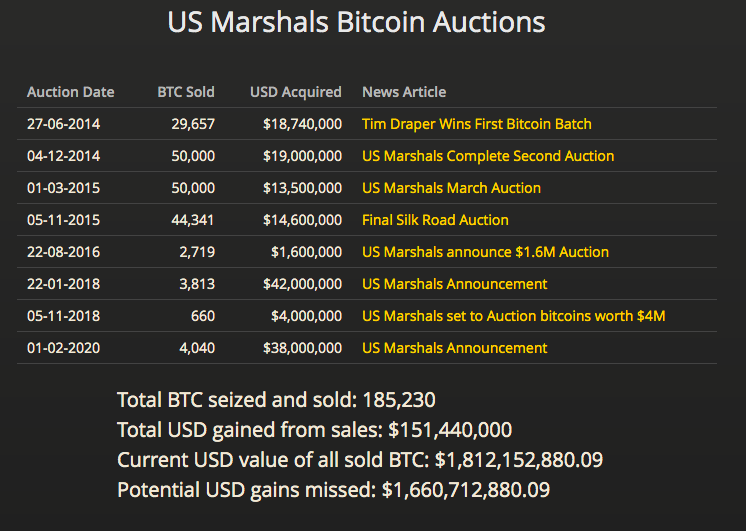 The U.S. government has approached Bitcoin the wrong way

The total 185,230 Bitcoin that the U.S. government once held has increased to approximately $ 1.7 billion – $ 1.8 billion. The government sold its Bitcoin holdings through a series of auctions starting in 2014. An auction is currently underway throughout February, with just over 4,000 BTC on sale. So, what is the total amount they earn from selling Bitcoin through all these auctions? Just over $ 150 million. That’s a very faint figure compared to the 1.8 billion dollars that could have been collected. They have lost at least $ 1.65 billion.

Introducing the US Marshals Bitcoin Auction realtime schadenfreude tracker. As of today, the Marshals have missed out on over 1.7 billion dollars by selling early.https://t.co/jn6hAMbj1I

Governments should have known how to hodl Bitcoin

Although officials sell BTC at the wrong time, the U.S. government is heating up with the idea of ​​cryptocurrencies and Blockchain technology. The U.S. Securities and Exchange Commission (SEC) has insisted that it will consider cryptocurrencies this year. The Exchange-Traded Product (ETP) has not been approved yet, but insiders hope it will happen this year.

Meanwhile, the former Chairman of the Commodity Futures Trading Commission (CFTC), Christopher Giancarlo, has said that the United States must consider the digital dollar, and has made an effort to do the same. Federal Reserve Governor Lael Brainard has also suggested that a Central Bank digital currency (CBDC) could be considered.

Besides, as AZCoin News reported, Japan is also trying to request U.S. assistance in developing and issuing CBDC.

Bob Summerwill of Ethereum Classic: Ethereum Maximalism is so unhelpful, hard fork is not a bad work

Scam PlusToken transferred $117 Million Worth of Bitcoin To Cold Wallet