The U.S bill proposal referred to Ripple and XRP

A proposed bill on payment insurances refers to Ripple and XRP as the newest developments in payment channels. The incline in cross-border remittances has raised US awareness of regulators to the opportunities for tracking and securing funds.

Join us on Telegram: https://t.me/azcoinnews

The future potential of payment platform

Ripple and XRP were mentioned as cross-border payment systems in the proposed bill text. A document on Remittance Transfers Under the Electronic Fund Transfer Act (Regulation E) is still in discussion until January 2021. 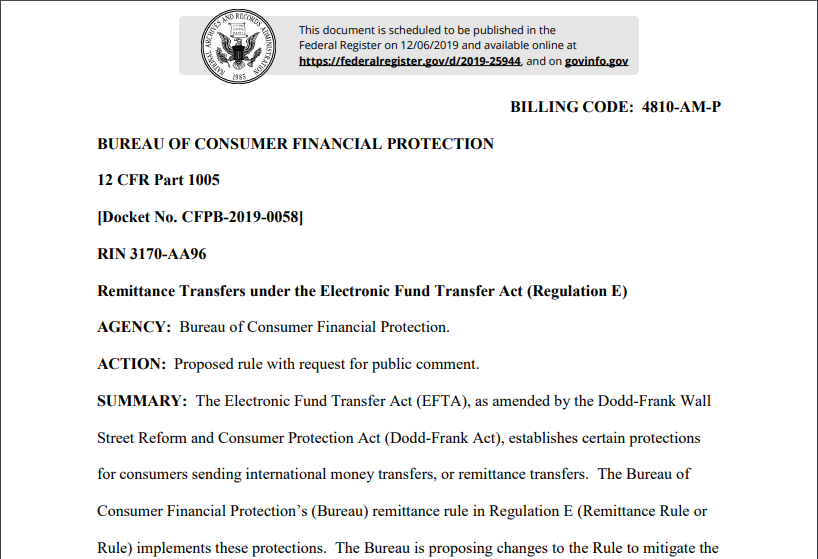 On page 38 of Remittance Rules stated that the continued growth of “fintech” nonbank remittance transfer providers and their further expansion into partnerships and other relationships with banks and credit unions, which allow such entities to tap into the closed network payment systems that nonbank remittance transfer providers have developed. With the continued growth and expanding partnerships of virtual currency companies, such as Ripple, which offer both a payment messaging platform to support cross-border money transfers as well as a proprietary virtual currency, XRP, which can be used to the adequate settlement of those transfers.

Ripple network may work alongside Swift

Ripple was mentioned as being a system that could accurately predict the funds to be received. The Bureau believes that the broad adoption of SWIFT’s GPI product or Ripple’s suite of products could help banks and credit unions to know the exact final amount that recipients of remittance transfers will receive before they send the transfer.

The document did not mention other payment platforms or blockchains specifically, so XRP has been considered only digital assets related to a unique remittance system. However, the proposed legislation on protecting remittances does not involve insurance of transfers on other blockchain networks, but only fiat settlements.

Ripple has currently encouraged all users to make transfers and settlements through Ripple Network, which unified xCurrent and xRapid. And the usage of XRP is still optional.

The XRP digital asset stays as one of the speculative bets in the crypto space. XRP stood to a lower range of $0.21, which many see as an uncertain entry point to bet on a future rally.

Bitcoin price is still in the downtrend of the market, Altcoin market find a way out

China’s Bitcoin ASIC has affirmed its manufacturing improvements and dominance

Ripple appears on the list of the top 100 biggest…

XRP may be gearing up to outperform Bitcoin but cannot…

Brad Garlinghouse: Ripple will be Amazon of crypto…

FSB Chair wrote a letter outlining a schedule to G20 and…

CZ confirmed that Binance was not regulated in Malta as FUD…

Digital Currency Research Institute: Blockchain is not ready to be used in high volume payment systems

Discover Coinbase’s Brian Armstrong plan to bring cryptocurrency to everyone

Digital Currency Research Institute: Blockchain is not ready to be used in high volume payment systems

On Feb 19, the Financial Stability Board (FSB) Chair Randal K. Quarles, wrote a letter outlining a schedule for…
Scam News

According to a post on the Bitcoin subreddit by Zhoujianfu users, it seems that they have just been hacked a large…
AZ -News

Blockchain has long been associated with Bitcoin. However, few people know Bitcoin is just an application on…
Exchange

Discover Coinbase’s Brian Armstrong plan to bring cryptocurrency to everyone

In an interview with Forbes, Brian Armstrong, the 37-year-old billionaire cofounder and CEO of Coinbase, said he…
Exchange

TradeSatoshi active exchange 2015 has announced this week that it will be closed. And the important thing is that…
Loading ... Load More Posts No More Posts