The premium rates on CME’s Bitcoin Futures for March 2020 recorded a dip of 1.61%

Bitcoin has been on a roller coaster for the past few weeks, with the regular price reaching thousands of dollars in minutes. The Bitcoin price has dropped by almost half from its all-time highs, with cryptocurrency markets stuck in a downtrend for the past six months. Now, researchers have noted “unusual” moves in the Bitcoin Futures market, with the premium rate rising even as the price of Bitcoin drops, suggesting that the price of Bitcoin may climb even higher by the next year.

A host of institutional investors and the development of Bitcoin’s derivatives market are a big highlight in 2019.

The birth of Bakkt BTC Futures, Fidelity’s interest in cryptocurrencies, and the launch of the Binance Futures exchange all came shortly after Bitcoin increased significantly between April and May. Many consider the development of a derivatives market to be a must for the next bull run. However, at press time, market sentiment is still divided among institutions.

According to Arcane Research, Futures of the Chicago Mercantile Exchange registered to reduce Futures premiums for BTC contracts in March 2020. The Bitcoin contracts for December have been settled, and the attention has shifted to BTC futures contracts in January and March 2020.

It is also reported that the premium rate on CME for contracts in March 2020 has recorded a decrease of 1.61%, after nearly 2.3% just a week back.

In contrast, other platforms offering BTC Futures contract settlements improved their premium rates to 1.55% during the same period in March 2020. Organizations, including Kraken, BitMEX, and Deribit.

CME’s reduction in premium rates comes from the back of its Trader Commitment report, where data shows the institution has discounted prices more than the price increase on Bitcoin. According to data shared by Unlolded, traders, hedge funds, and money managers have been shortened on Bitcoin since the last week of 2019. The combined position of -1,250 BTC is the lowest seen for a year.

Although the CME COT report is still down at press time, the total amount of interest and open volume on CME Bitcoin Futures is significant, as the daily volume surpasses the $ 300 million mark once again after the violated the same position on December 23.

There’s something strange going on with Bitcoin Futures

“The premium rate on Bitcoin contracts in March 2020 has increased, although Bitcoin prices have dropped. The implied volatility of Bitcoin is set to rise to more than 70% in June 2020, up from 55. % in mid-December 2019. This clearly shows that traders have foreseen changes in Bitcoin prices. To put this in perspective, the gold options for trading in June 2020 are variable, with an implied volatility of 11.5%.” 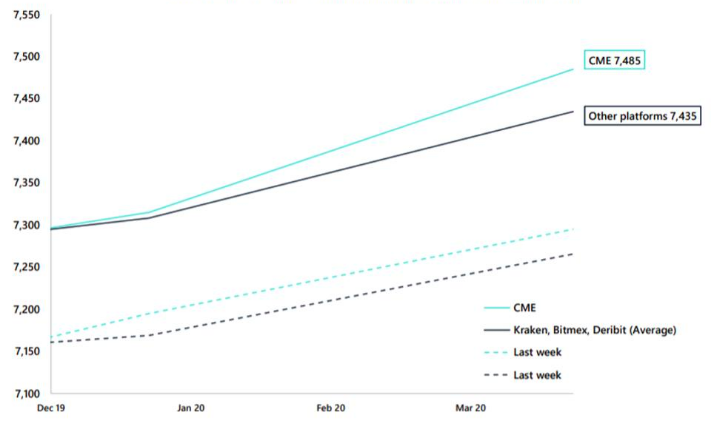 Meanwhile, with Bitcoin halving happening in May next year, this will be the driving force to see the number of bitcoins rewarded for mining companies halve, and some expect this to boost the Bitcoin price—though others disagree.

Let’s look ahead to the future and what will happen in the 2020s in the cryptocurrency market?