According to Ohio’s Federal Bureau of Investigation and prosecuted, two Romanian masterminds including Bogdan Nicolescu (37), and Radu Miclaus (37) are being investigated and sentenced to 20 years and 18 years in prison, respectively, for their alleged involvement in installing malware on over 400,000 computers in order to obtain personal user information and sell the stolen data on the deep web. The network of hacked computers was also used to mine cryptocurrencies.

Testimony and court papers revealed that Nicolescu, Miclaus and other Romanian citizens were running a “criminal enterprise” dubbed the “Bayrob Group” located in Bucharest, Romania. The group reportedly began operating in 2007 with the development of customized malware software, which was sent via emails claiming to be from trustworthy organizations including Western Union, Norton AntiVirus and the Internal Revenue Service.

This malware software infected thousands of personal computers in order to gain access to credit card and other personal user information. Then it obtained the email addresses from the targeted PCs, including users’ contacts, and began sending out malicious emails to the harvested lists, primarily in the United States.

In addition to using the infected network to expand its size, “Bayrob Group” used the collective processing power of the computer network to solve complex algorithms for the financial benefit of the group, a process known as cryptocurrency mining.

Romanian’s National Police assisted the FBI to find out who was the culprit. The investigation began when a complaint was filed by an alleged victim in the Northern District of Ohio. Case investigators also claim they found evidence on dark web forums of “trafficking in users’ personal financial information, passwords, and access to their computers” with criminal activities reportedly leading to losses of around $4 million.

On Tuesday, US authorities arrested three men in connection with BitClub Network, an alleged Bitcoin scam that was highly lucrative and appeared to rake in a whopping $722 million. They are Matthew Brent Goettsche (37) of Lafayette, Colorado; Jobadiah Sinclair Weeks (38) of Arvada, Colorado; and Joseph Frank Abel (49) of Camarillo, California. They are facing up to 25 years in prison.

They were indicted in New Jersey for allegedly running a business called “BitClub Network” that bilked investors around the world by promising good earnings from a cryptocurrency mining pool. Prosecutors say the earnings were phony and the whole operation was a high-tech Ponzi scheme.

The release also showed conversations that were captured over the Internet in chat rooms. 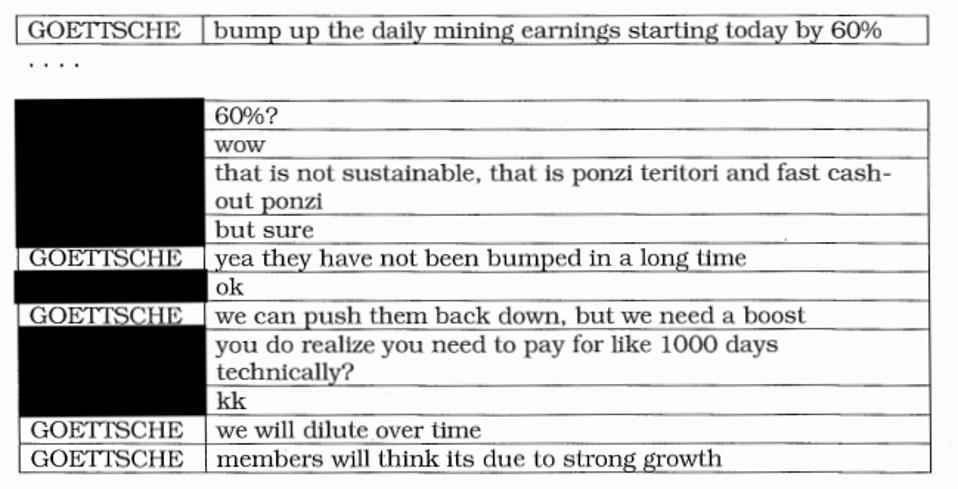 According to documents filed in the case and statements made in court, from April 2014 through December 2019, Goettsche, Weeks, and others conspired to solicit investments in BitClub Network by providing false and misleading figures that BitClub investors were told were ‘bitcoin mining earnings,’ purportedly generated by BitClub Network’s bitcoin mining pool. Goettsche discussed that their target audience would be ‘dumb’ investors, referred to them as ‘sheep,’ and said he was ‘building this whole model on the backs of idiots.’ Goettsche directed others to manipulate the figures displayed as ‘mining earnings’ during the course of the conspiracy.

Anyone who believes they may be a victim may visit the website dedicated to this case. There, victims can find more information about the case, including a questionnaire for victims to fill out and submit.

Two defendants remain at large and their identities remain under seal, according to the U.S. Attorney’s Office in New Jersey.

Compared to other cryptocurrencies, Shiba Inu (SHIB) only managed to boost its price by about 2% over the preceding…
Ripple News

The legal dispute between Ripple Labs and the U.S. Securities and Exchange Commission (SEC) may reach a turning…
Scam News

Ankr, which provides node infrastructure for Proof-of-Stake blockchains, has been hacked and hackers are "dumping"…
Bitcoin News

Crypto prices, which had been rolling this week, retreated on Thursday, underscoring investors' caution about the…
Altcoin News

The U.S. Securities and Exchange Commission (SEC) and Ripple have begun submitting their responses to the…
Loading ... Load More Posts No More Posts