According to the sharing from Kusama Network, the first real-world functional parachain Statemine, began processing permissionless transactions after an on-chain upgrade last week. After some smooth running over the weekend, the time has come to move to the next stage: slot auctions.

The first Kusama parachain auction went off without a hitch, the now active parachain has already begun successfully processing transactions

After months of hype, the first Kusama parachain auction took place without a hitch. Parachain has now successfully started processing transactions, paving the way for more location auctions in the future.

The predictions surrounding Polkadot parachains over the past few months have finally materialized after the first successful parachain auction on the Kusama network. This development marks the first time a 100% heterogeneous shard blockchain has been launched.

Later, the parachain was upgraded to “Statemine”, a popular parachain with a number of different utilities and functions. Other parachains will take advantage of Statemine’s utility thanks to the XCM protocol, which also allows KSM tokens to move between Kusama and the parachain seamlessly.

With the Proof-of-Concept algorithm, “Parachain Position Auctions” can begin, but they will require contributions from the KSM community. The selection of parachains for Kusama revolves around staking the largest number of KSM tokens for as long as possible. After the Kusama Council and KSM holders decide on the auction timeline, the next round of auctions can begin.

Accordingly, the Polkadot team has proposed the following auction schedule for approval by the board and KSM stakeholders: 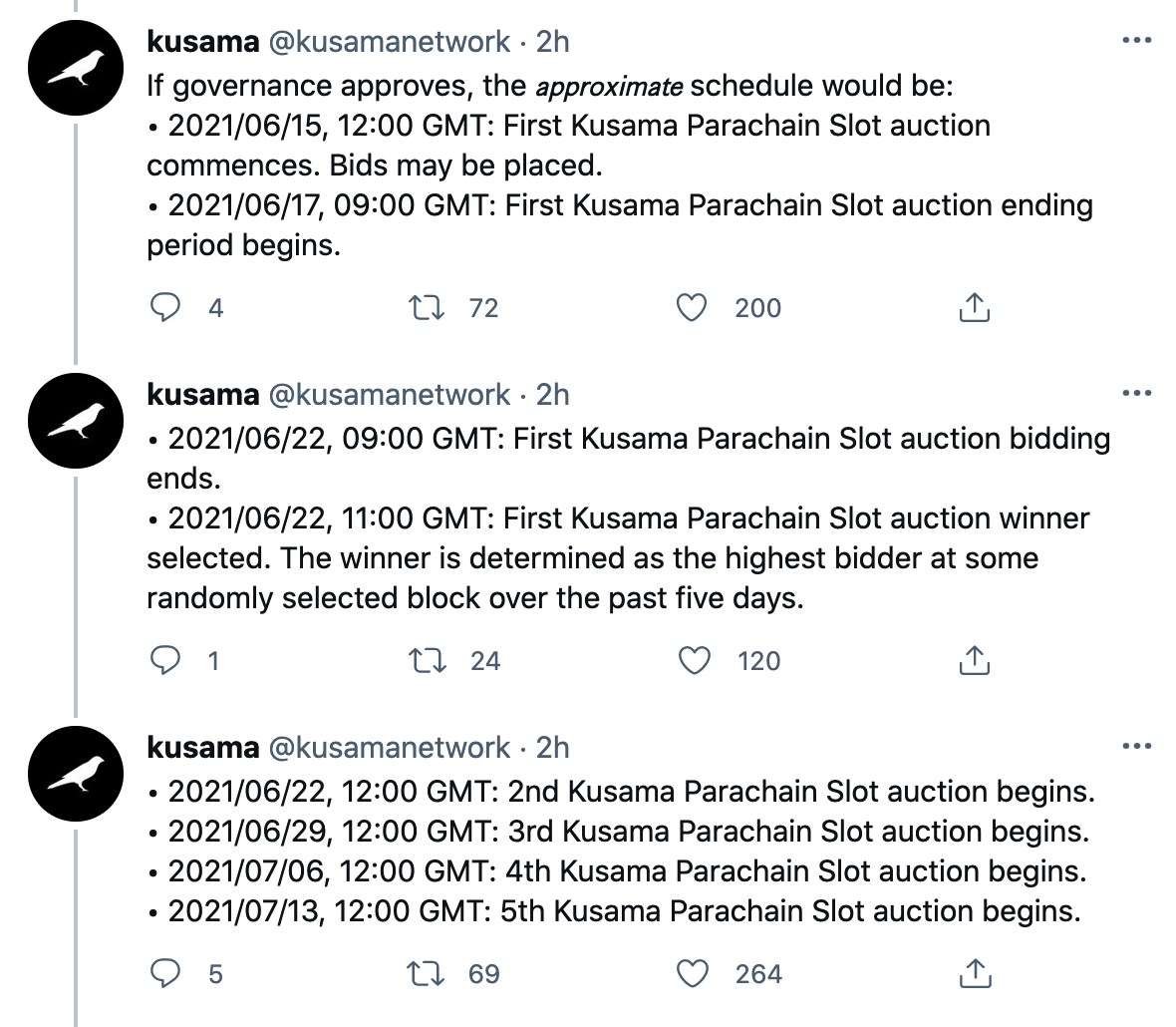 On Kusama, each auction has an open bidding period of approximately 1 week and assigns a total slot duration of 48 weeks (divided into 8 lease periods of 6 weeks each). Auctions will start with an initial batch of 5 auctions, with a new auction taking place every week.

To incentivize the Polkadot community and build its ecosystem, OKEx supports Kusama parachain position auction with exclusive early voting features as well as rewards from projects that users vote for.

#OKExEarn: Vote to get double rewards with Kusama via staking $KSM @kusamanetwork @Polkadot 🎉

“OKEx’s support of Kusama parachain slot auctions will allow users to vote for projects before the auction officially begins. During early bird voting, users can get rewards from both OKEx and the projects they vote for. Once the official auction starts, OKEx will vote on behalf of the users.”

Morever, the KSM used to vote during the early bird voting session will be locked and cannot be canceled.

According to the announcement, Kusama slot auction opening time:

Cryptography expert Adam Back dispels the news that the FBI hack the Bitcoin wallet of the DarkSide hacking group to recover $2.3 million