Charles Hoskinson, CEO of IOHK, Cardano parent company, said the company does not want to announce the final release date for the Shelley mainnet until all risks around it are mitigated.

Shelley, the era of Cardano blockchain, is set to provide staking, is expected to be released on the mainnet in late February. However, when February arrived and passed, Shelley was still in testnet mode. The question is, when will Cardano’s most important era be released.

A Twitter user raised questions about Hoskinson’s February promise as we entered March 2020. In response to the tweet, IOHK CEO said two important versions are expected, restarting Byron and testnet Shelley Haskell “will take place in the next five weeks or more.”

We have an internal band that we are very comfortable with and I’m waiting to see two milestones to confirm. The release of the Byron reboot and the release of the Shelley Haskell testnet. Both should happen within the next 5 weeks or so

About two hours later, the CEO made a video of about 7 minutes for sharing the work the internal team is striving to make the expected release come true.

Charles Hoskinson has assured the community that the Shelley mainnet will be released soon. However, he deliberately did not mention a specific date for the release. The CEO explained that while the infrastructure for the release of Shelley was ready, the company was still not 100% sure whether they could launch smoothly.

“So instead of giving a possibly incorrect date (…), I want to wait until a few more milestones are reached.”

Hoskinson also noted that the company is currently 75% confident that it can release Shelley within the next two months. However, 25% could not debut too high.

For Shelley to be released on the mainnet, Cardano will have to overcome two important milestones. The first major update that needs to happen is restarting Byron, which will see the Haskell wallet backend added to the new code. The process, according to Hoskinson, is currently in a “deep QA” state and is getting closer to completing integration by mid-March.

The slow and steady development process means that there is no problem from ITN moving into the Haskell testnet.

However, crossing these milestones led investors to wonder if the mainnet was actually released. 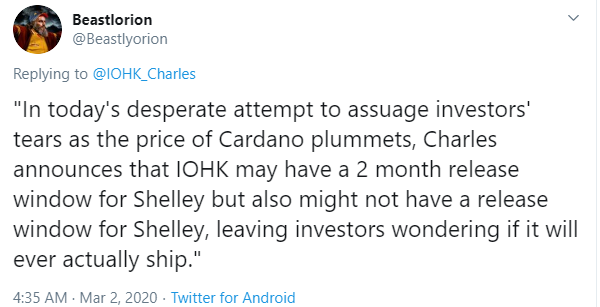 Apart from the mainnet release delay, everything else at Cardano went as planned, according to Hoskinson. The company had fewer problems with the Daedalus wallet, successfully implemented the OBFT hard fork, and discussed the launch of staking-as-a-service (SaaS) with various exchanges. The software for the Ledger hardware wallet will also be updated soon and will include support for multisig and cold staking.

A small Bitcoin sell order placed on Binance leading to an unexpected price drop of circa $100, what happened?

The importance of $ 10,500 for Bitcoin price and factors…

On June 1, Bitcoin price unexpectedly exploded, rising as high as $ 10,450 on major exchanges in a move to…
Loading ... Load More Posts No More Posts