The crypto market is still looking to recover from a recent crash. Today, the leading coins by market cap have shown some signs of reversal but it seems the momentum is unstable.

Bitcoin has seen chaos in the past few days, bringing dangerous market conditions for active traders who want to make money from this volatility.

This massive $ 1,800 decline has devastated even for low-leveraged traders, resulting in a total of $ 96 million positions wiped out.

Mohit Sorout, founding partner at Bitazu Capital and a renowned analyst, believes that this volatility – and the liquidation it causes – is good for Bitcoin’s underlying health. He sees it as a healthy psychological reset, which could lead to further price increases in the coming days.

“Market liquidated over-leveraged participants on Bitmex. $123M in shorts $96M in longs, all in a span of 24 hours. A healthy BTC sentiment reset. Range a couple days, trap late bears then run it back up.”

Market liquidated over-leveraged participants on bitmex. $123M in shorts $96M in longs, all in a span of 24 hours.

Range a couple days, trap late bears then run it back up. pic.twitter.com/nfzp2rKXgU

Yesterday, the price of Ethereum plummeted below the support of $ 240. ETH price has even dipped below the $ 230 support level and the 100-hour simple moving average (SMA).

More importantly, it seems that there is a rising channel forming with support of nearly $ 242 on the hourly ETH / USD chart. On the upside, the initial resistance is near $ 250 and the upper trend line of the channel.

Earlier this week, the LTC price rose above the $ 45 and $ 48 resistance levels. However, it failed to remove the $ 50 resistance area.

There is also a major uptrend line formed with support near $ 46.5 on the 4-hour chart of the LTC / USD pair. The pair is currently approaching the major resistance near $ 48 (the recent breakdown area). It coincides with the Fib 61.8% retracement of the recent decline from a high of $ 49.94 to a low of $ 44.58.

The ADA price have increased by nearly 60% since May 18 after Cardano co-founder Charles Hoskinson revealed the Shelley upgrade roadmap in a YouTube podcast with Lark Davis. Currently, it has reached a critical resistance level that could initiate a serious reversal. This ability is also aided by the creation of a short-term bearish pattern.

Moreover, during the movement within this pattern, volume has been considerably lower in bullish candlesticks than in their bearish ones. This is a sign of selling pressure.

If the price breaks down from this triangle, it seems likely, it can bring the price to 700 satoshi. 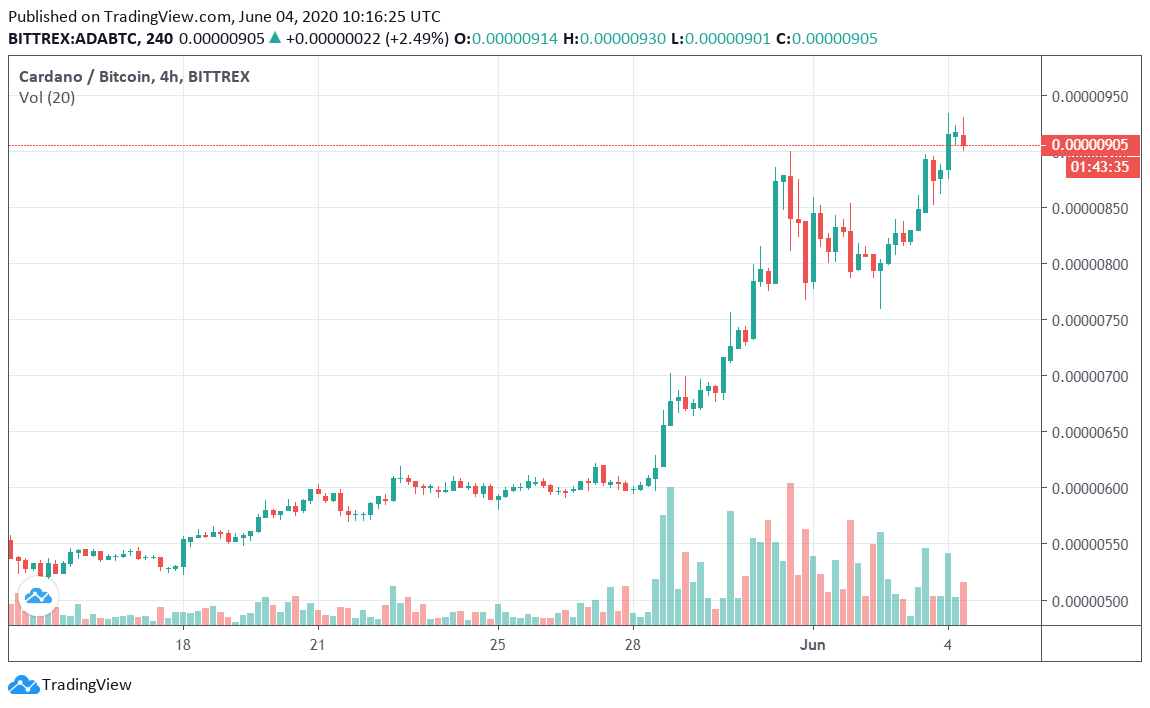 TRON has broken out of long-term descending resistance lines – which could indicate that it has begun its uptrend.

However, the RSI shows an increasing bullish divergence, which shows that the price will breakout. Also, yesterday’s daily close was the highest since May 4, slightly higher than this descending resistance level.

If the price breaks out, the next resistance level is found at 195 satoshi.

The short term chart supports this possible increase. TRX successfully surpassed the 168 satoshi level as a support and created many long lower shadows. 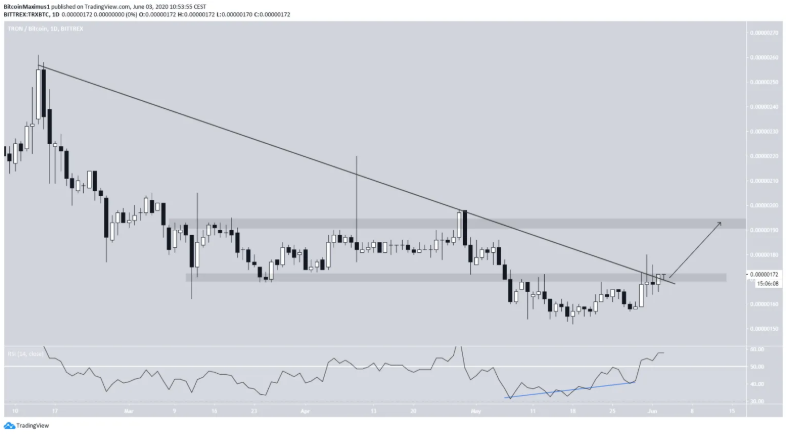 Besides, there is an impending bullish cross between the 50 and 200 hour moving averages, an indication that an uptrend has begun and the price is likely to continue going up. 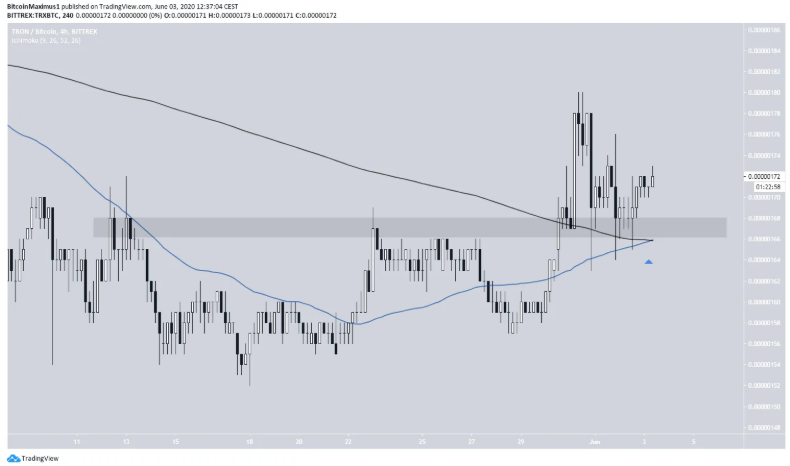 XRP Checks are very similar to paper checks: a transaction initiator can send funds to a recipient, and the recipient can “cash out” the amount at a later date. XRP does not actually move until the recipient cashes the check.

Though Checks have been part of XRP Ledger’s code since February 2018, the feature did not receive enough votes to be enabled until now.

Meanwhile, the Ripple blockchain’s native token has fallen by more than 91% from its all-time highs and may drop another 50% from the current level. An anonymous trader pointed out the fractal before 2017 noting that XRP slipped by nearly 95% from its local peak.

With a 5.66% YTD increase, the Ripple token is trading higher but is still stuck in the stiff resistance areas, shown in the chart below. 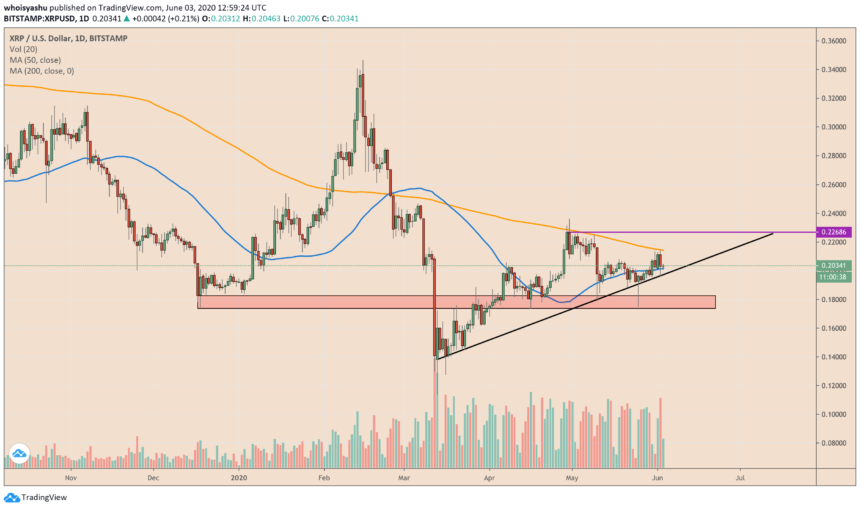 XRP / USD is testing the 200-day moving average (orange) to breakout towards $ 0.226. Meanwhile, the uptrend is supported by the uptrend line (black). Fractal is similar to Bitcoin, showing that XRP may be following the upward move of the leading cryptocurrency.

VeChain is back and better than ever after proving its utility in a wide range of industries. As the host company reaches a new partnership, the price of the VET token seems ready to increase.

Social engagement activities related to VET have increased steadily over the past 2 months. The company notes a series of spikes on this underlying figure and anticipates higher price dynamics. 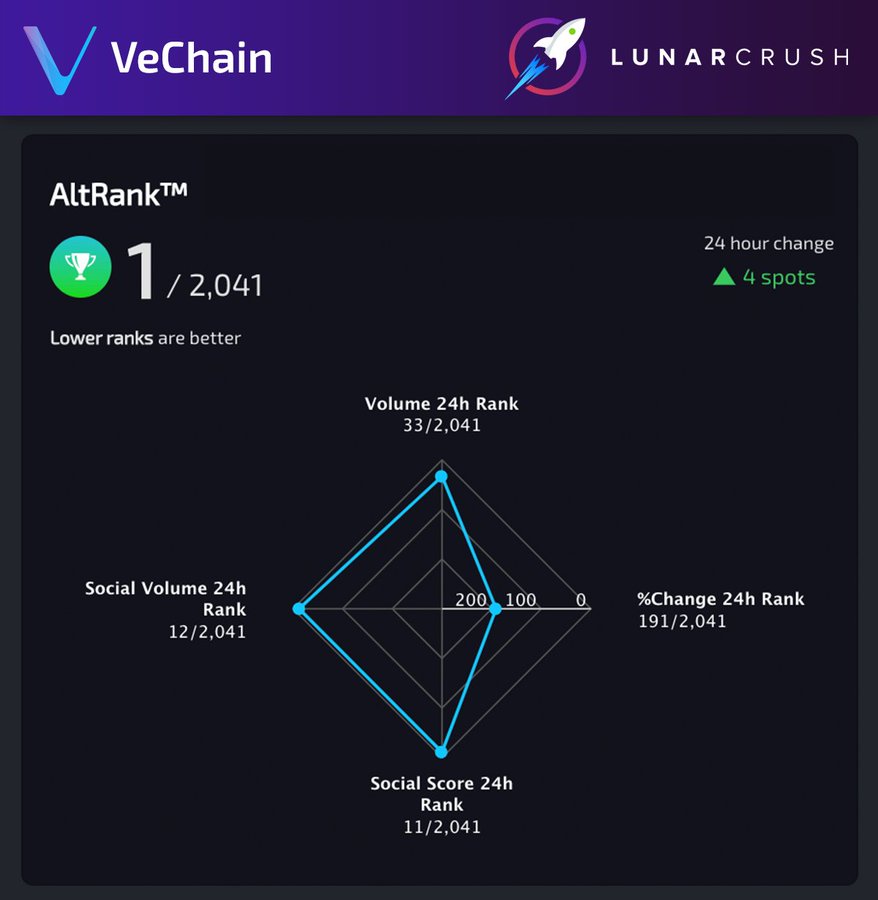 The high level of involvement around the VET community seems to be related to VeChain’s recent partnership.

Bayer, one of the world’s largest pharmaceutical companies, announced that its subsidiary in China is developing a drug traceability, monitoring, security, and auditing solution dubbed “CSecure” powered by VeChainThor technology.

Crypto Brief on June 10: Bitcoin may see “at…

Crypto Brief on June 08: Bitcoin rebounding above the…

Crypto Brief on June 07: Bitcoin price could plunge to…