The 1inch made a profit for many traders when the price was up by 16% but there were also those who missed $ 1.8 million

On Christmas Day, the decentralized exchange aggregator service 1inch released 90 million governance and utility token. According to data from Dune, the highest recipient of the free token distribution received 1 inch 9,749,686,003, worth approximately $ 27.5 million at the top price of $ 2.8. What a warm Christmas this is for this user. Meanwhile, there are also users who, because of personal negligence, have not kept up with the growth of the market, missing tens of millions of dollars. 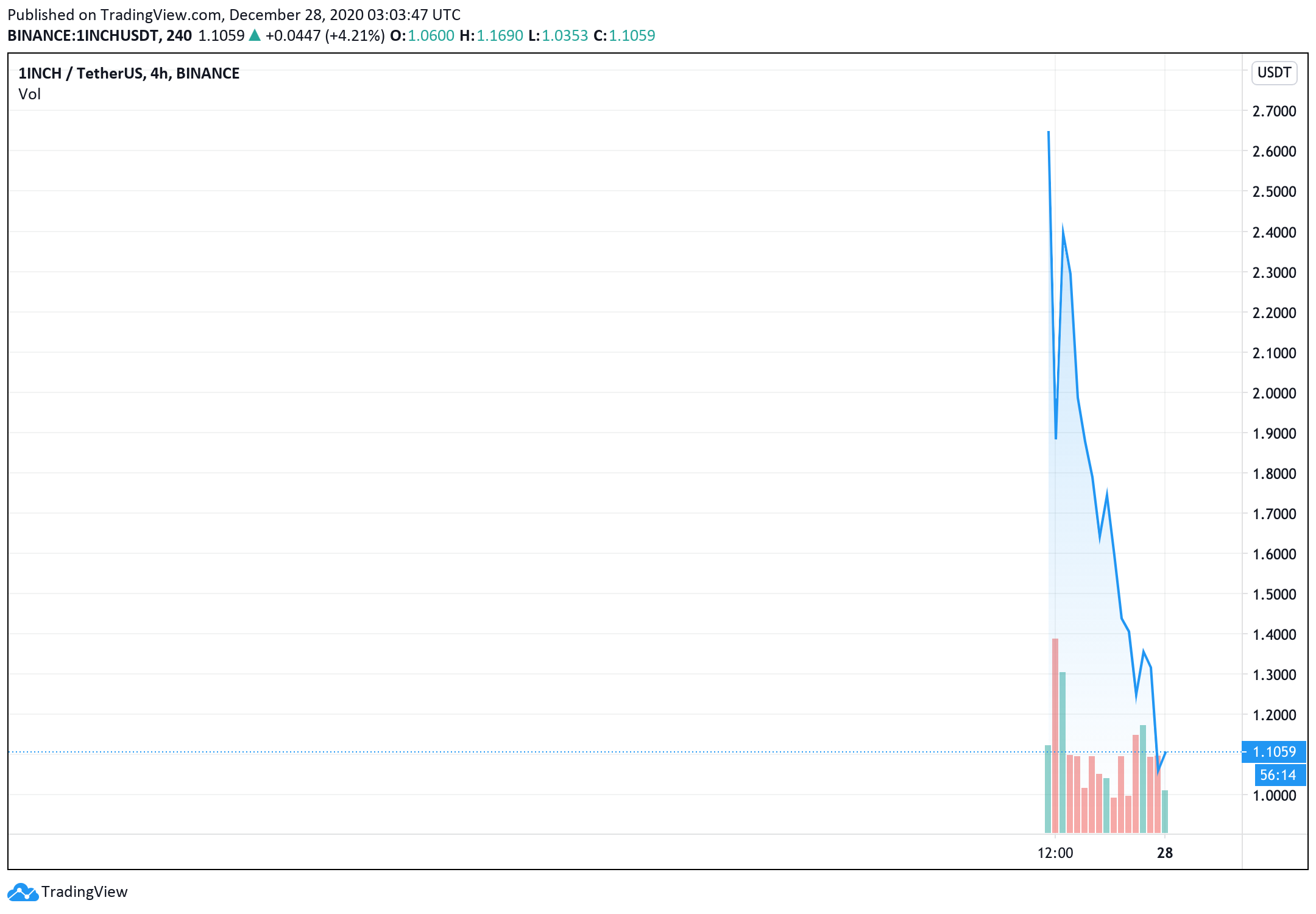 1INCH was up by 16% in just 24 hours with a trading price reaching $ 2.9, profitable for lucky traders

In total, over 55,200 addresses qualified to claim free 1INCH tokens with more than half of the amount requested under Dune. The average total number of tokens on these addresses is about 1,629 tokens with qualified addresses guaranteed with at least 600 tokens.

To qualify for the airdrop, a trader must complete a transaction on the platform by September 15th. The user has made a total of four transactions, or transactions valued at least $ 20 by 24. December is also eligible to request free tokens.

1INCH is up 16% in just 24 hours with a transaction price of $ 2.9 but has since dropped to around $ 2. The airdrop event is imminent after the project successfully raised $ 12 million in a funding round supported by Pantera Capital in early December.

Specifically, Twitter user Timo Harings – a 23-year-old from Germany – whose scheme to net $ 1.8 million in tokens fell just short of qualifying for the distribution parameters. Specifically, Harings recounted how he created 500 Metamask wallets and conducted a single transaction per wallet to qualify them. However, no wallet received a wallet due to failure to cross the required transaction amount.

So my ~500 metamask wallets, that all did trades on 1inch in preparation after the Uni airdrop, didn’t receive any airdrop in the end cause it was $17 per trade, $3 below threshold. Would’ve totaled a 1.8 million dollar profit

But I won at Catan today with family, which is nice

Ultimately, Harings spent $ 8,000 in gas money on transactions, predicting a minimum profit of $ 250,000. Instead, if his wallet qualifies, he would get a whopping 1.8 million dollars. All, however, is not a loss – one of his “primary” trading wallets has dropped more than 1,800 tokens, even though it barely cost the plan enough.

However, he still tries to keep his spirit:

“There is a part of me that is proud of the idea and work I’ve put into it and how I ‘solved’ it. If this would’ve happened in 2016/17 it would be far more devastating emotionally but now in 2020 after everything that has happened […], it’s digestible. I learned not to cheer before crossing the finish line. We all have a good amount of time left for making it and are in for a wild ride over the coming 12-18 months in my opinion. No one has missed that chance yet.”

Moreover, he’s walking away from the experience with some hard-won wisdom under his belt, as well as an optimistic view of his future earnings potential.