The $14,000 region as the next major upside target for Bitcoin price

Bitcoin and the entire cryptocurrency market are currently witnessing some silent price action. This newly formed phase of consolidation has come close to a recent spike, which has led Bitcoin to reach a peak of $ 11,400. It seems Bitcoin price is struggling to keep above $ 11,000, as it has been trading below this critical support level most mornings.

While this is not a positive sign, it is essential to note that the critical support level to watch is $ 10,500, and it has yet to show any signs of a break below this level.

According to analyst Tyler Coates, this constant price drop could cause short positions to be stuck, laying the groundwork for Bitcoin to see a short squeeze that drives the standard cryptocurrency higher. On how high this could lead to digital assets, he is pointing to the $ 14,000 area as his next bullish target.

Bitcoin price flashes some weak signals, but could it be a bear trap?

At the time of writing, Bitcoin is trading down just over 1%, with the current price of $11,010. It has been trading below $ 11,000 most of the day, as buyers have lost part of their strength due to the insurmountable selling pressure that has been set in the area between $ 11,000.

Overnight, the bears pushed BTC to as low as $ 10,800, but the buying pressure here was quite significant and helped slow its decline. While talking about this current period of consolidation, analyst Tyler Coates explained that he believes it has brought Bitcoin into short-lived tightening territory that could allow cryptocurrencies to rise significantly higher shortly.

“For my money, BTC is currently doing that sidestep before another leg. Similar to the fractal following the breakout of the triangle (around $ 550). Many indicators will be showing overbought conditions, but this is prime short squeeze territory for a honey badger in heat.” 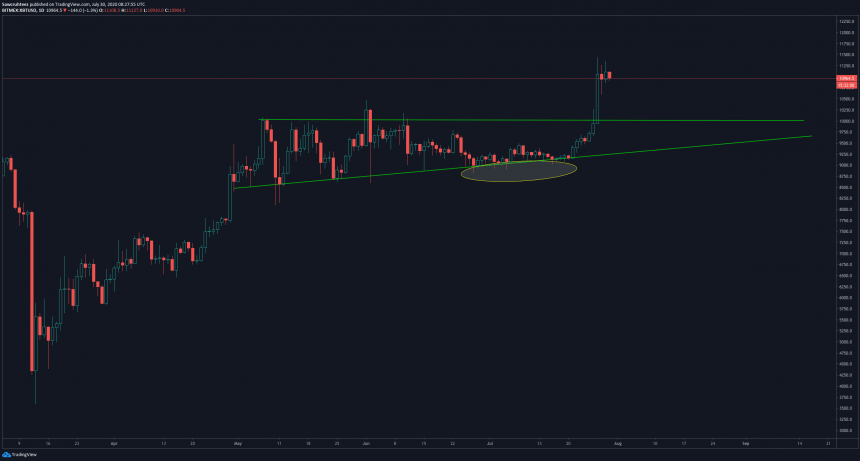 Bulls can use the increased number of short positions that have occurred due to its consolidation phase to push the cryptocurrency even higher.

The analyst also set an optimistic price target of $ 14,000. He explained in a separate analysis that the bullish flag that Bitcoin was broken due to its recovery from the region below $ 10,000 created this high price as a bullish target. 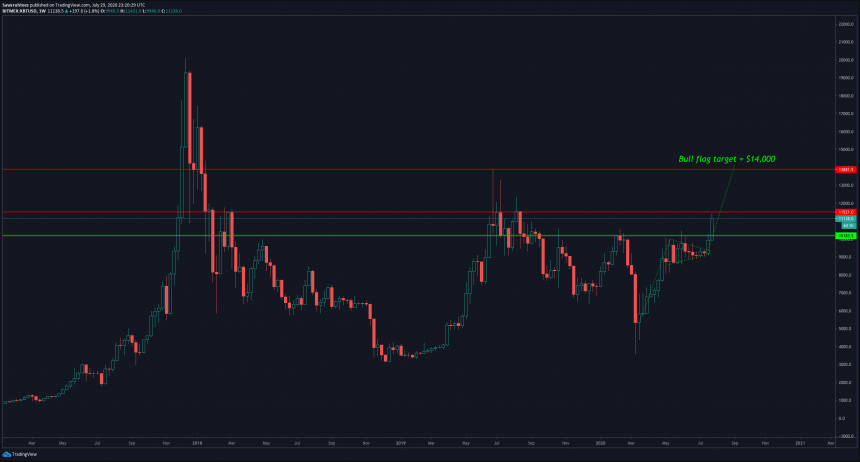 The dollar is still on track to reduce its losses on a weekly basis every Friday, economic data worsened concerns about a slowdown in the economy, prompting some experts to warn that the good time for USD will be limited.

The US economy suffered the biggest drop, the record in the second quarter and the signs that the labor market continued to stand still, reducing the prospect of rapid recovery According to Commerzbank, the reputation of USD has been so affected in recent weeks that its appreciation potential is limited.

US GDP fell at an annual rate of 32.9% in the second quarter of 2020, less than the expected reduction of 34.5%, but still the largest decline on record.

JeromePowell, chairman of the Federal Reserve Board of Governors, acknowledged that cracks began to appear at an economic recovery pace during a press conference on Wednesday.

“The data are showing a slowdown in the pace of recovery.”

But the impact of the virus on the economy is not the only challenge causing the dollar to depreciate. The worsening progress in US-China relations also raises concerns.

The U.S. can still take a lead in regulating crypto, and Ripple Stuart Alderoty knows how