Tether Treasury continues to issue more and more USDT. Today it has printed another 200 million USDT, which will be entering the market shortly. 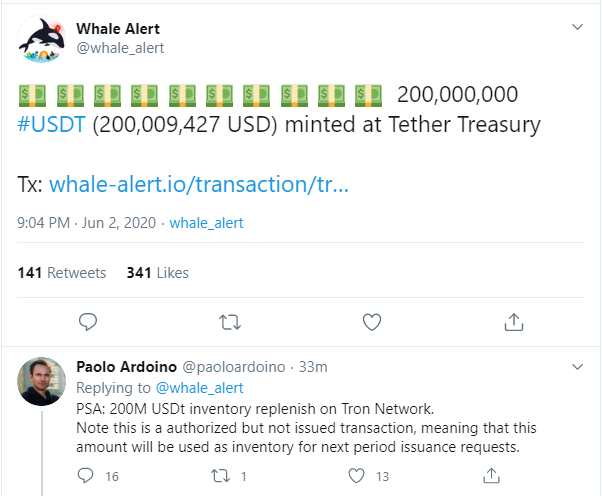 Tether treasury is now on track to soon issue $9,185 billion in total USDT with its latest issuances. However, critics continue to call out the treasury for minting large amounts of USDT. The amount of USDT is flooding the crypto market at unprecedented levels. The market capitalization of stablecoin Tether (USDT) hit a whopping $6 billion later in March this year, and by June 2, the stablecoin hit a market cap of over $9 billion.

According to a new study from the Centre for Economic Policy Research, stablecoins are not driving up the price of Bitcoin or any other cryptocurrencies. Researchers Richard K Lyons from UC Berkeley and Ganesh Viswanath-Natraj from the Warwick Business School looked at the minting of Tether and other stablecoins over the last three years and concluded that the price of bitcoin is not affected by the issuance of Tether.

The researchers found little correlation between prices and new stablecoins issuance of USDT. Currently, the idea that the issuance of Tether (USDT) precedes a Bitcoin price pump is now taken by some as a bullish sign. At the time of writing, bitcoin is changing hands at above $10,150 mark.