After several days of consolidation, Bitcoin, Ethereum, and the rest of the cryptocurrency market were finally broken. ETH price also appeared some weaknesses, first sliding below $ 220 since the end of May 2020.

Although it’s still early for this lower leg, technical indicators suggest that expectations of a lower move are gaining credibility.

What happens when the ETH price is taken over by the bear market?

According to cryptocurrency trader Teddycleps, with the chart below after ETH dropped below $ 220, it shows that ETH is about to fall below the technological trend it has formed since April. The chart also accentuates that the indicator the analyst is using is “inches from” crossing bearish.

Should the indicator cross bearish, that will be the first time since March 10th. This is pertinent as a bearish cross in the indicator preceded a 60% drop from $ 200 to a capitulation low of around $ 85.

Ethereum may also encounter some weaknesses due to its seasonality. According to analyst Edward Morra, ETH will undergo a sharp correction in the next half year.

“If ETH follows its cycle this time, then high of the year could be in & we’ve 6-month correction.” 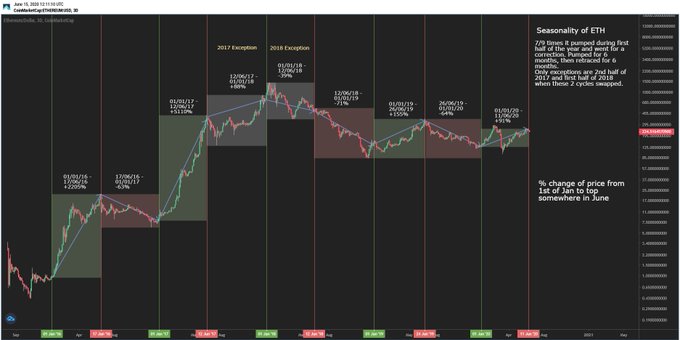 The evidence for the downsides is that according to technical analysts, Bitcoin is also falling. With ETH trading with a 0.8 180-day correlation with Bitcoin, the collapse of Bitcoin price almost certainly means a similar setback in Ethereum.

According to Rager, Bitcoin breaking below $ 8,500 will make this summer longer for BTC holders. This is related to the fact that $ 8.5 has been the most important support level for the cryptocurrency market in the past two months. Despite the short-term downward pressure, many people are still raising the long-term price in the cryptocurrency market.

This is a new model I’m working on, it picks the start of exponential bull runs.

1) Bitcoin was setting up for a bullish run until the COVID white swan killed the party.

2) This model suggests we are close to another bullish run. Maybe another month to go. pic.twitter.com/wmoEdMVywF

On-chain analyst Willy Woo said that Bitcoin is likely to be thrust into a full-blown bull market in the coming month or two.

Messari researcher is shining the spotlight on four…

The Medalla testnet for the phase 0 of ETH 2.0 was an…