Magistrate Judge Sarah Netburn has denied the U.S. Securities and Exchange’s motion to revoke the amici status of Ripple (XRP) holders, delivering a blow to the regulator. Different filings against it depicted the said narrative. Nevertheless, Defendant came back relentlessly to counter Plaintiff’s filings on several occasions. 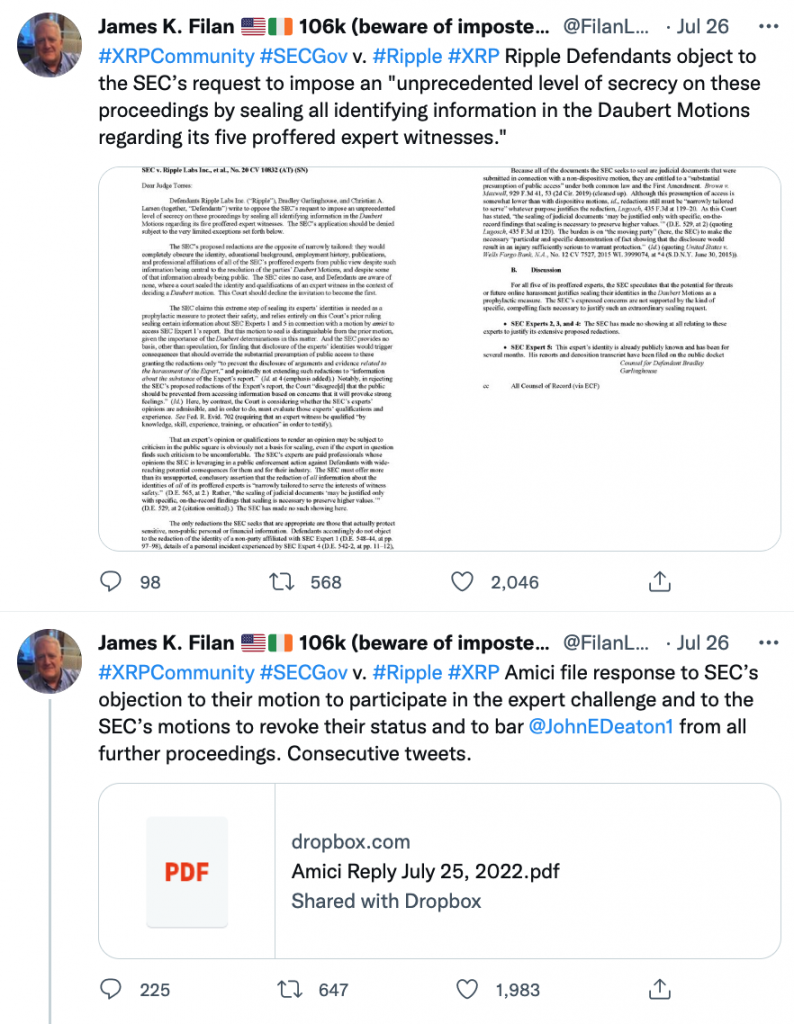 Attorney John Deaton led a group of XRP holders by filing a motion to intervene in the case back in March 2021. Although their attempt got rejected by the court last October, they did manage to obtain amici status. Thereby aiding XRP holders incorporate “friends of the court” briefs.

And, now they might be after SEC as depicted by James K. Filan, a fellow famed attorney. The defendant had filed their response to SEC’s motion. Herein, the SEC requested the court to deny the amici’s motion to participate in the lawsuit. And, to even deny attorney John Deaton’s involvement for ‘gross misconduct.’

Firstly, the filing targeted the SEC’s unlawful expansion of the Howey test as the token represented a “security per se”. This theory (by the SEC) has been an issue since the very beginning, as per Deaton. Ergo, the SEC itself is to blame because of its ‘unprecedented allegations.’

According to attorney Deaton, before he disclosed the SEC’s expert’s name, the parties in the lawsuit (Ripple and SEC) – had previously identified another SEC witness (Dr. Albert Metz) before it filed its motion. In this context, Deaton added, “I never anticipated the issues with the second SEC expert, nor should I have been expected to, particularly given the release of the other expert’s identity by the parties.”

In addition, the said attorney blasted the SEC for taking the opposite stance regarding the Expert’s reports. Thus, asserting, “The SEC’s diametrically opposed legal positions are consistent with Judge Netburn’s harsh but accurate observation that the SEC is adopting its litigation positions to further its desired goal, and not out of a faithful allegiance to the law.”

Overall, Plaintiff remains hellbent on revoking Amici’s rights in the lawsuit because the summary judgment filing date approached nearby.

Indeed, the SEC aimed to remove Deaton from the case- there’s no denying it. Different enthusiasts asked the same question to the attorney on Twitter. For instance, consider this tweet.

The key attorney figure responded: “Had the SEC said this after I filed the writ of mandamus on 1 January 2021, I wouldn’t be tweeting this, and I wouldn’t be amicus counsel. I would have said ‘if you can prove Ripple sold a security in 2013 or yesterday, so be it.’ But the SEC chose to go with ALL XRP are illegal.” As expected, attorney Deaton’s response to the SEC attracted a lot of reactions from the Ripple community. Attorney Jeremy Hogan commended Deaton’s response.

Att’y Deaton’s response might be my FAVORITE brief in the Ripple case so far.

AND, also happens to spill on Hinman and his “relation” to Ethereum.

The SEC has filed its Opposition to the Ripple Defendants’ Motion to Seal in connection with the expert challenges. The Ripple Defendants have filed a request to file a reply letter in support of their sealing motion to correct certain factual mischaracterizations in the SEC’s opposition to the Defendants’ sealing motion. The SEC does not object. Also, judge Torres denies SEC’s Motion to Revoke amici status and bar John E Deaton from further proceedings. Amici can’t participate in the expert challenge now but may file an application to brief concerns with SEC’s expert at summary judgment.

[PolkaStarter] The Future of Metaverse

[Polygon] Polygon’s Journey in First Half of 2022: Developer Recap