The crooks are impersonating Tron founder Justin Sun in an attempt to steal money from the victims. The scammers target cryptocurrency projects under the guise of forming a partnership with Tron. They even invite victims to a “live” Skype call with Tron CEO Justin Sun himself.

In a Medium article posted on Sunday, Kyle Pierce, the co-founder and lead developer of blockchain startup uPlexa, revealed the step-by-step process he suffered from scammers. First, Pierce received a LinkedIn message from the director of operations and business development at Ledger Capital, William Chang. 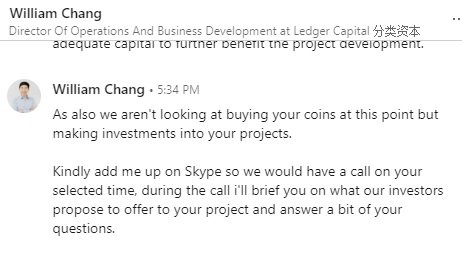 The alleged “Chang” claimed that he is looking for projects to invest in and offered to have a Skype call | Source: LinkedIn

This representative length of his firm was working on a “secret project” with the Tron. Pierce was offered the opportunity to be part of this secret project and was asked for his email address, which would be forwarded to the Tron Foundation.

At this point, Pierce knew something was amiss but decided to play it out as long as he could for curiosity’s sake. The next step saw him receive an email supposedly from the Tron Foundation.

However, when Pierce checked out the SPF (sender policy framework) and DKIM records (DomainKeys identified email) of the email, he found that they didn’t align with those of the legitimate Tron network mailing address.

Besides, Pierce also had a meeting with Justin Sun. During the call, Pierce was offered the enticement of multiple exchange listings and was even given a chance to migrate his project to the Tron blockchain.

All “Justin” wanted in return was a minimum investment of $ 32,000 – which they portrayed as a 40% discount from the usual fee of $ 80,000. The investment was to be made in return for JUST tokens – a legitimate token which recently launched on the Tron.

Pierce was then asked to sign a contract to seal the deal – but this is where his private investigation ended. Pierce told us:

“I tried to play it as far as I could, but when they sent over the agreement, I didn’t feel like putting my actual ID in and didn’t know if creating a fake id for it would be legal (even given the fact they are scammers). ”

Besides, this case of Pierce is not only once. The victims, after joining Skype, are greeted by a pre-recorded video of Justin Sun with the voice of a crook. The scammer pauses the video of Sun whenever their target begins to speak – then hits play again when discussed time to reply.

The final effect is similar to a badly dubbed Chinese movie – see below.

The scammers also created a fake Justin Sun passport, which they send to their victims as proof of identity. However, as noted by the team behind Mochimo – one of the targets of the scam – the passport photo is constructed from a publicly available photograph of Justin Sun. 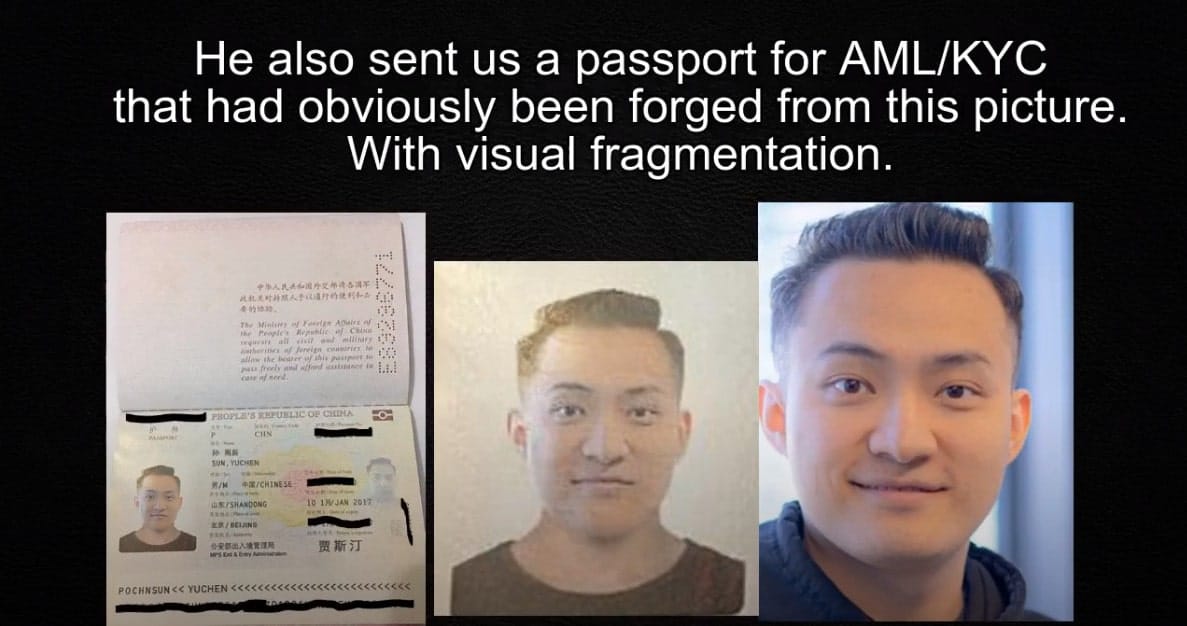 The scams are becoming more and more sophisticated

Pierce speculated that the desire of smaller cryptocurrency projects to connect with a project like Tron could lead to many of them falling for such a scam. Pierce said:

“I could see people allowing their emotions to get to them. They may be thinking, ‘I need to prove myself to Justin Sun and Tron,’ and have a focus on how to present themselves and their projects or companies, rather than ‘who is this person I’m speaking to?”

Pierce said informing people about such scam techniques could provide some immunization against them. However, he acknowledges that as deep-faking technology innovate, it may make it impossible to tell future impersonators apart from their real-life counterparts.

Ripple CTO: XRP volatility could prevent it from wide use, while USDT can be a universal coin

Is TRON a scam?