Over the past few weeks, the price of XRP has started to perk up after a -50% performance in 2019.

In fact, since bottoming at $0.17 in December, the asset has essentially doubled, trading at $0.337 as of the time of this article’s writing. This means that XRP has outpaced Bitcoin, which has gained a relatively measly 65% in the same time frame. 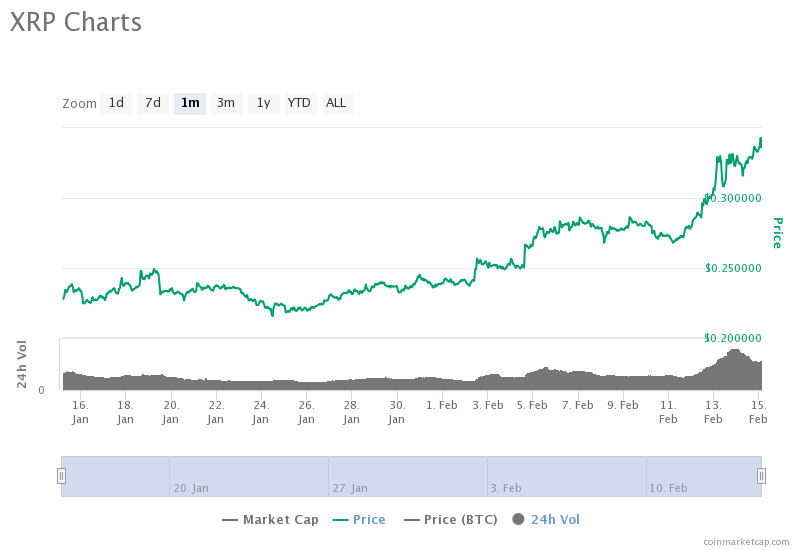 While this is already impressive in and of itself, analysts expect for the number three cryptocurrency by market cap to explode even higher in the coming months, with many likening the current price action to XRP’s price action at the end of 2017, prior to a jaw-dropping move that brought prices over 1,000% higher in a few weeks’ time.

A breakout from a 680-day bear trend could provide the fuel to take XRP prices much higher.

The breakout of the bearish trend also is accompanied by a breach of the 200-day exponential moving average.

XRP is also above the cloud or “Kumo” on the Ichimoku indicator – an indicator designed to provide a full “at-a-glance” look at an asset’s health.

As for how far XRP could fly, its anyone’s guess. However, past data shows that XRP could rally as much as 6,000% in the coming months, and reach prices of as much as $14 per token if a similar move occurs.

After the last major downtrend breakout, Ripple rallied from just pennies to well over $3.50 at the crypto bubble peak in early 2018. The powerful move shocked investors and got the world talking about the cryptocurrency.

The Crypto Dog, a popular analyst on Twitter, explained in a recent tweet that he is watching for a 15% upside movement in the coming weekend against the crypto’s BTC trading pair.

“I’d like to see XRP head a little further north this weekend, say about +15%?” he explained.

I’d like to see $XRP head a little further north this weekend, say about +15%? pic.twitter.com/mFLv0UV9kq

Cryptocurrency trader Magic, a prominent market commentator that is known for making quite dividing calls on the price action of Bitcoin and XRP, recently remarked that “this could be the real deal folks,” referencing his sentiment that XRP could soon see a massive rally, citing the fact that it has broken through key resistances:

This could be the real deal folks. XRP’s chart looks identical to 2017 before the massive rally, and resistance has been thoroughly destroyed. Nothing is guaranteed. Stops are my best friend in times like this.

Not to mention, the trader Inmortal Technique recently revealed that XRP just simultaneously broke past two key long-term resistances: the downward resistance formed in September of 2018, which has constrained price action since, and a downtrend level that has stopped rallies over the past few months.

What is UNUS SED LEO?