According to Whale Alert, 1 billion XRP – worth over $202 million – was unlocked yesterday evening from the company’s escrow wallet. 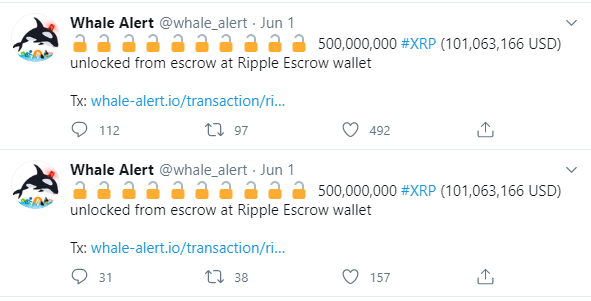 As explained by Ripple CTO David Schwartz, Ripple had previously locked 55 billion XRP in an escrow, which is programmed to release 1 billion every month for 55 months. The escrow system ensures greater transparency and predictability over the uncirculating supply, preventing Ripple from dumping billions and thus, crashing the price.

A recent report from Messari elucidates this, showing that Ripple had their lowest quarterly XRP sales ever in Q1 of this year, selling a mere $1.75 million worth of the tokens during this time period.

As AZCoin News reported, institutional direct XRP sales have declined by 86% in Q1 2020. Despite the decline in direct institutional XRP sales, RippleNet usage has been surging amid coronavirus as financial institutions go digital.

Bitcoin price has risen above $ 10,100, what is waiting for BTC ahead?

Traders plan to short with fury as XRP reaches 200-day…

Ripple intends to continue to expand its On-Demand…