Ripple released 1,000,000,000 XRP from escrow, while Bitstamp and Coinbase together have moved 645 million XRP

XRP price rallied hard on Saturday in a move similar to a crowd pump recently observed in out-of-favor stocks such as GameStop. XRP jumped 56% to $0.50944 to hit the highest level since Dec. 22. That was the biggest single-day percentage gain since Dec. 21, 2017. However, while the price keeps rising, Ripple has unleashed a whopping 1 billion XRP from its escrow wallet. Bitstamp and Coinbase have moved a gargantuan amount of 645 million coins. 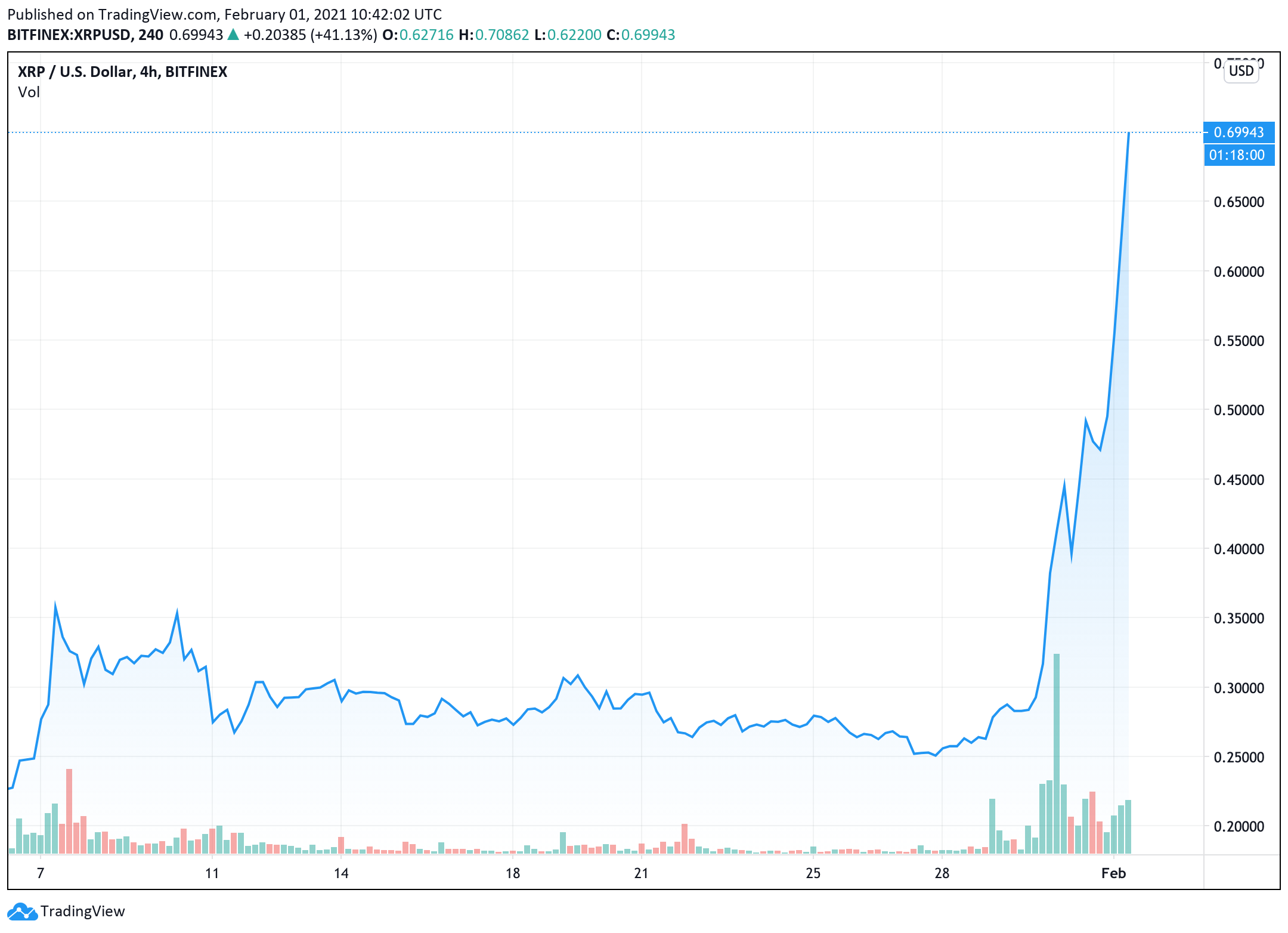 Ripple released 1,000,000,000 XRP from escrow, while Bitstamp and Coinbase together have moved 645 million XRP

The double-digit price rise was likely fueled by members of a Telegram-based group called Buy & Hold XRP, which came into existence on Saturday. The group’s membership hit Telegram’s 200,000 ceilings within the first 24 hours, forcing a migration to a new official channel with a similar title but a different link.

“Traditional Crypto-Pump groups are being copied and legitimized by WallStreetBets-style crowd-pumps, and are now turning their burning gaze from dogecoin to XRP.”

Classic pump and dump tactics are not new to crypto, particularly for XRP, which has a strong army of followers. However, their morale may have been boosted by a group of amateur day traders based on a Reddit forum called WallStreetBets, who recently launched a coordinated buying attack on the video game retailer Gamestop, triggering a short squeeze and inflicting heavy losses for hedge funds.

It remains to be seen if the Buy & Hold XRP group members remain faithful to the group’s title by holding the cryptocurrency.

According to Whale Alert, Ripple has unleashed a whopping 1 billion XRP from its escrow wallet. 800 million of the released XRP as a rule gets locked back in and around 200 million is kept by Ripple for covering its operational expenses, investments, etc.

Another development, Bitstamp, and Coinbase have transferred 645 million XRP. Bitstamp is RIpple’s European ODL corridor that works with the XRP/EUR pair. It has sent 40 million XRP to a custodial platform BitGo used by Ripple for storing XRP.

As for Coinbase, it wired 400 million XRP in one go between its wallets. CEO and founder of XRPlorer service Thomas Silkjær have commented that the exchange moved the funds from its cold to its hot wallet.

At press time, XRP is changing hands near $0.665. The price rise has erased a significant chunk of the plunge from $0.55 to $0.20 observed following the U.S. Securities and Exchange Commission’s filing a lawsuit against Ripple Labs in late December.

[2Miners] RaveOS Is Now Free for 2Miners Users. Why Is It The Best Mining Operating System?

While the story between Ripple and the SEC has not come yet, recently, in the latest episode of "Axios on HBO",…
Loading ... Load More Posts No More Posts