One of Ripple Labs’ lawyers in the legal battle against the U.S. Securities and Exchange Commission (SEC), James K. Filan, said that Ripple’s side completely disagrees with the SEC’s request to extend the time.

Filan said that Ripple filed an objection to the SEC’s request to extend the production of Ripple-related documents for two months. 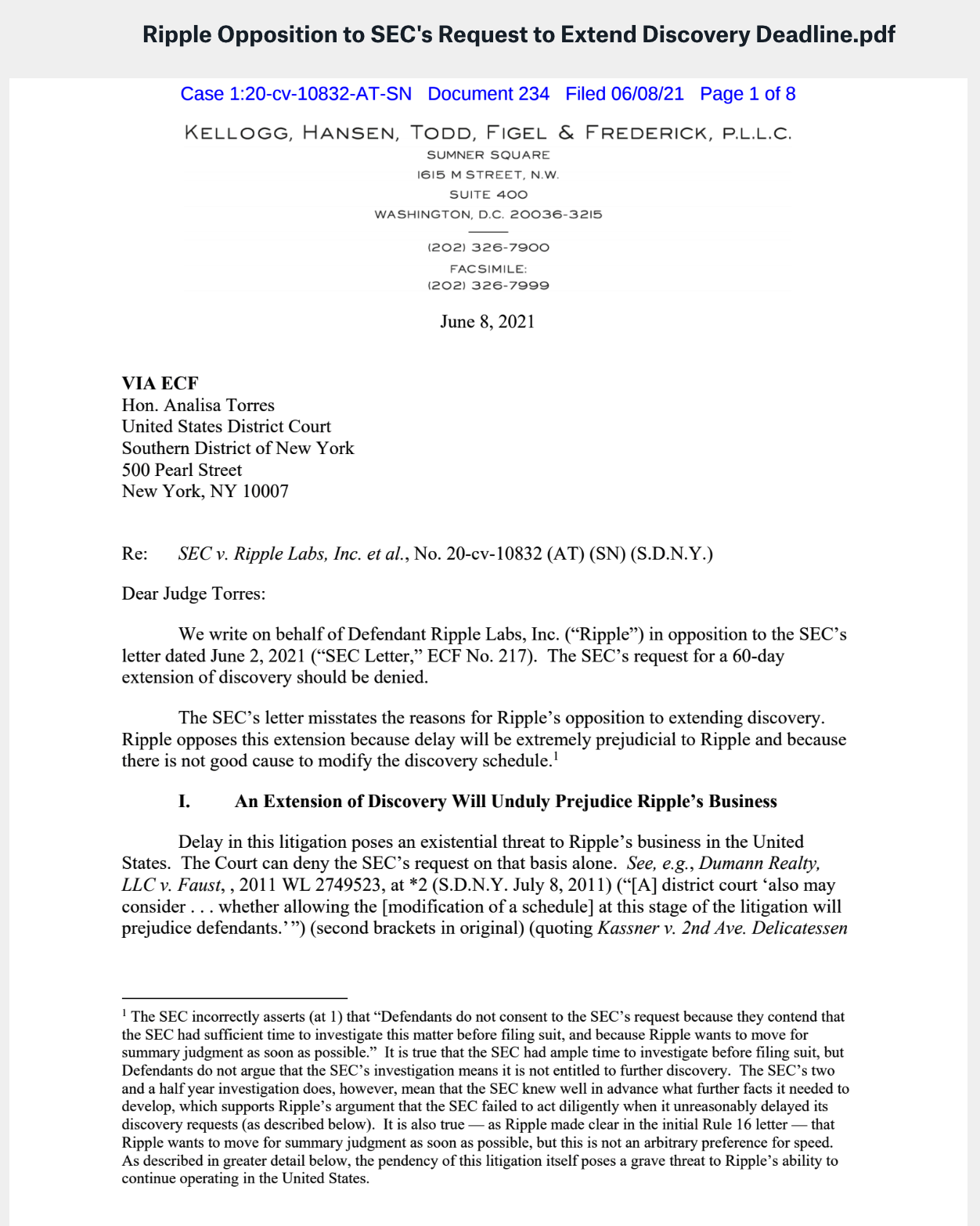 On June 3, the US regulator formally asked a federal judge for a 60-day extension to Ripple’s case. The SEC stated that they needed more time to depose more witnesses in the case (it has already deposed and interviewed witnesses, which took two days). So the SEC asked for two more months to complete that.

Ripple’s lawyers filed an objection to the judge, saying this was not a good enough reason to change the schedule. Besides, if the court agrees, this will be detrimental to Ripple as the SEC wrongly states the reason for this delay.

“The SEC’s letter misstates the reasons for Ripple’s opposition to extending discovery. Ripple opposes this extension because the delay will be extremely prejudicial to Ripple and because there is no good cause to modify the discovery schedule.”

Overall, Ripple’s letter asserts that if the court grants the SEC a delay, they inadvertently constitute an existential threat to Ripple’s business in the United States.

Among the additional witnesses, the SEC wants to question are former Ripple chief financial officer Ron Will and former senior vice president at Xpring, Ethan Beard.

At the end of May, then, 10 witnesses were present and former Ripple employees were ready to testify on various matters related to the Ripple case. According to the SEC, the reason for the delay and the emergence of more witnesses is that during the investigation, more evidence has arisen, including the sheer scale of Ripple’s illegal XRP offering.

Specifically, the SEC referred to a study by a private consulting firm Cornerstone Research. As reported by the company, the SEC has filed more than 70 lawsuits against crypto companies. On this basis, the SEC believes that Ripple is aware of XRP’s current status as a security.

However, Ripple’s lawyers argue that this argument is unfounded because the SEC has never made this information publicly available before. According to the fintech company, the SEC only accused XRP of being secure when it first went to court. Ripple also claims that the US regulator has never notified the company of any legal violations resulting from the sale of XRP.

However, the SEC said that the fintech company was too clear about the status of XRP and the company itself could not have a reasonable explanation for this.

Moreover, the SEC also “threatened” the court that there would be unpredictable consequences if they lose the case against Ripple. Especially in terms of losses. They argue that the loss would harm the SEC and even go beyond the scope of this case.

“The court should avoid setting precedents with such far-reaching consequences.”

According to the regulator, in the event of a loss, future defendants will be able to refer to a court decision as was the case with Ripple.

While Ripple sees a new lawyer join the legal team to…

The SEC has filed a one-page response to Ripple’s…