Ripple made several transactions, totaling 98 million XRP, while its ODL partner moved half that amount

According to XRPL Monitor, over the past 15 hours, Ripple has made several transactions involving 98 million XRP, up to $ 22,540,000 at the current XRP/USD price. Meanwhile, Bitstamp, Ripple’s European ODL partner, is involved in half of them, about 48.5 million XRP. Bitso, based in Mexico, has also sent a significant amount of XRP.

Ripple and its ODL partners have moved large amounts of XRP 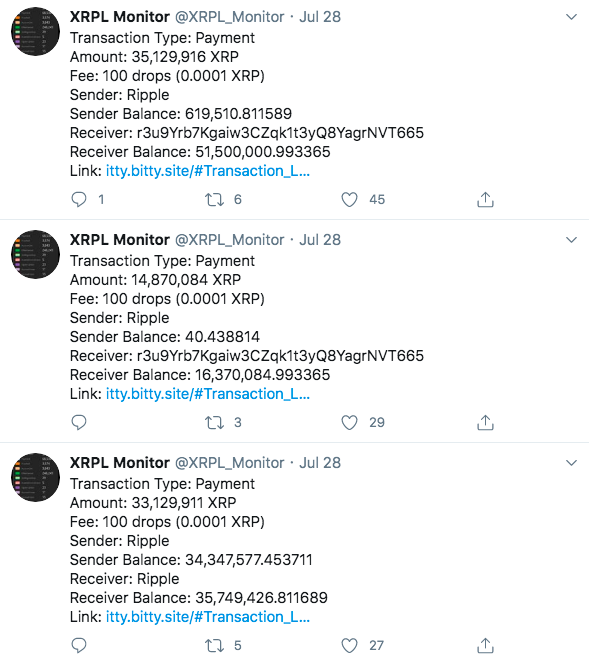 According to Whale Alert, a portion of these funds was sent from Ripple to Distribution Wallet, about 33 million XRP. Quite a lot of opinion that this could be an institutional investor looking to store and store XRP for future use.

Mexico-based exchange Bitso, the most significant ODL corridor to date, has transferred 12.5 million XRP. However, for a long time, none of the current major ODL corridors (located in Mexico, Philippines, Europe, and Australia) reached an all-time high in the XRP liquidity index.

Santander processed $ 528.63 million in total remittances, according to a new update from the bank. The app uses Ripple’s payment messaging system to move money between currencies. The tech product, which is a competitor to the international financial network Swift, helps banks settle fiat-to-fiat transactions in real-time by using messaging to written and verify transaction details.

📲 One Pay FX, the international payments solution for our customers, is the result of our passion for customer obsession. Since launching in 2018, it has executed €450 million in volume of cross-border transactions.

Watch the story of our passion here 👇 pic.twitter.com/1pXzx8guCx

After Santander posted his One Pay FX update via Twitter, some cryptocurrency enthusiasts questioned whether the bank also plans to use Ripple’s XRP-powered cross-border payment product, On-Demand. Liquidity or not. However, Santander did not respond.

Earlier this month, Santander’s Executive Chairman Ana Botín announced that half of the bank’s annual international transfers can now be processed using the Ripple application.