Following the announcement that the public may now see the Ripple summary judgment papers, XRP produced a huge green candle on its hourly chart. XRP price unexpectedly rose 5% in less than an hour as anticipation for the Ripple lawsuit increased. At the time of writing, XRP is changing hands at $0.37 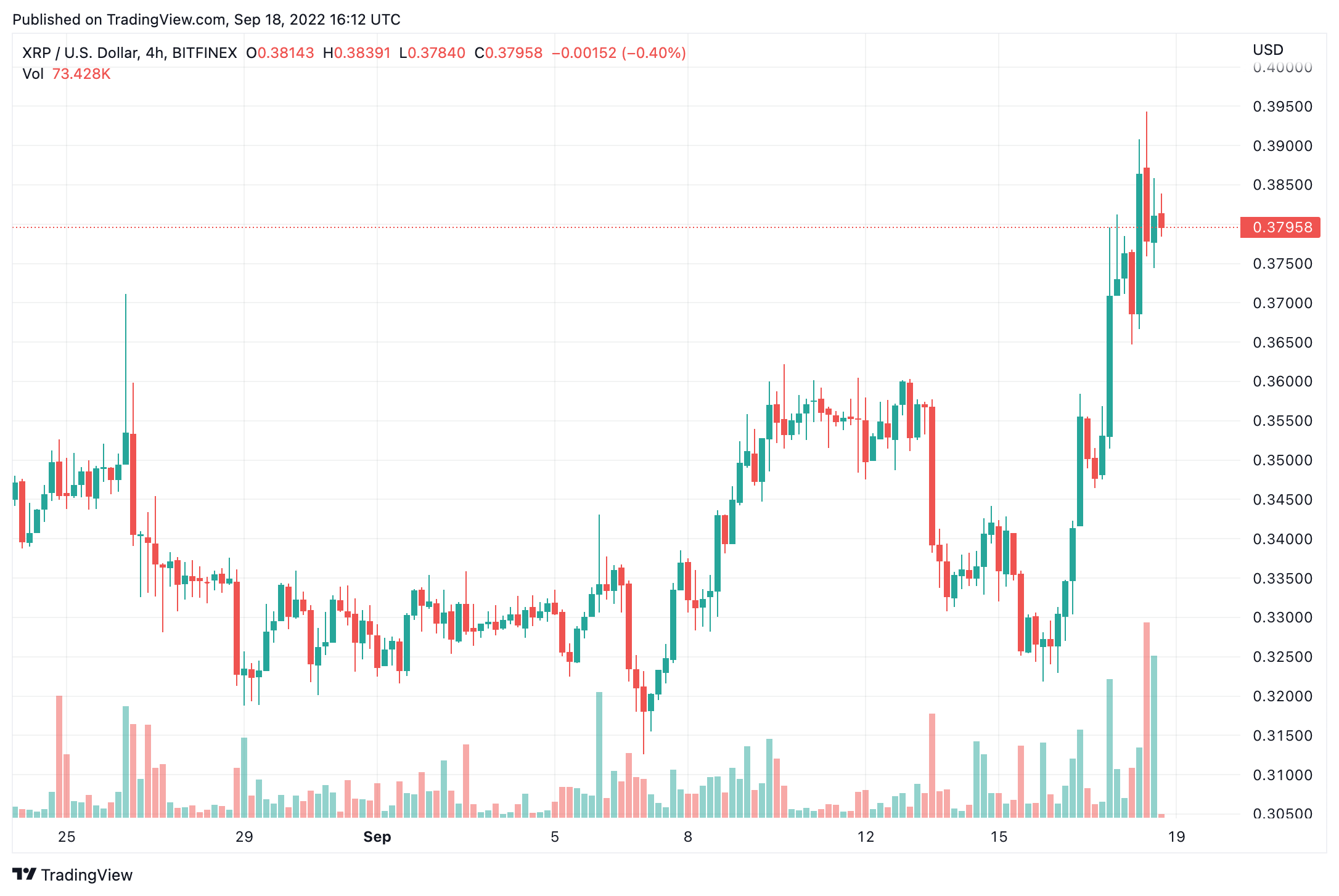 Although it has reduced some of its hourly gains, XRP is still up 8.33% over the past 24 hours and 7.43% when compared to a number of other cryptocurrencies, which were primarily trading flat at the time of publication. After hitting intraday highs of $0.394, XRP is currently trading at $0.38. A successful closing over $0.365 would result in XRP seeing gains for a third day in a row.

According to Ripple General Counsel, Stuart Alderoty, “The day is finally here” as the Ripple-SEC motion for summary judgment is public. The motions were expected Monday, Sept. 19, so they came quite earlier.

Alderoty shares his hot take on the summary judgment briefs. “After two years of litigation, the SEC is unable to identify any contract for investment (that’s what the statute requires) and cannot satisfy a single prong of the Supreme Court’s Howey test. Everything else is just noise. Congress only gave the SEC jurisdiction over securities. Let’s get back to what the law says,” he stated in a thread of tweets.

The briefs have elicited several responses from the community. Attorney Jeremy Hogan commented, “I just read the briefs and the SEC has got a couple of big problems: Its expert agrees that most of the changes in XRP price are due to market forces (and not Ripple).”

He further added, “The SEC failed to get on record that any XRP purchaser heard Ripple’s alleged marketing pitch; a big problem because it has the burden to prove everything here.”

Fred Rispoli, a law expert much interested in the Ripple case, says, “This will take hours to really dive into, but skimming through SEC’s brief, unsurprisingly it is relying heavily on marketing efforts. While this is the weakest point for Ripple, I just don’t think it is close to being weak enough to give SEC the win.” Rispoli added, “I think the only winning argument SEC has relates to Ripple marketing XRP. But zooming out from this tree and looking at the forest, it’s just not enough for the SEC to win.”

However, a member of the XRP community feels that the SEC’s expert’s conclusion that XRP price change is caused by significant market movements rather than Ripple marketing initiatives negates the SEC’s claim.

Ripple has about a month to submit its objection to these motions, with papers anticipated by October 18. By Nov. 15, when all briefs will be finished, responses to these are anticipated to arrive, and Judge Torres’ ultimate ruling will be awaited. James K. Filan forecasts that Judge Torres will rule on expert motions and summary judgment concurrently on or about March 31, 2023.

The location of Terra founder remains unknown, but Down Kwon said he isn’t on the run