CoinMarketCap (CMC) outraged the community by tweeting that Ripple’s XRP is not a real cryptocurrency. And today, they have apologized for their behavior.

Reportedly, CMC has shared an image of a game that asks players to find an impostor among digital assets such as Bitcoin, BNB, Ethereum, XRP, and others. Although the controversial tweet has now been deleted, it persisted long enough to get the crypto Twitter community talking about each of the in-game assets. 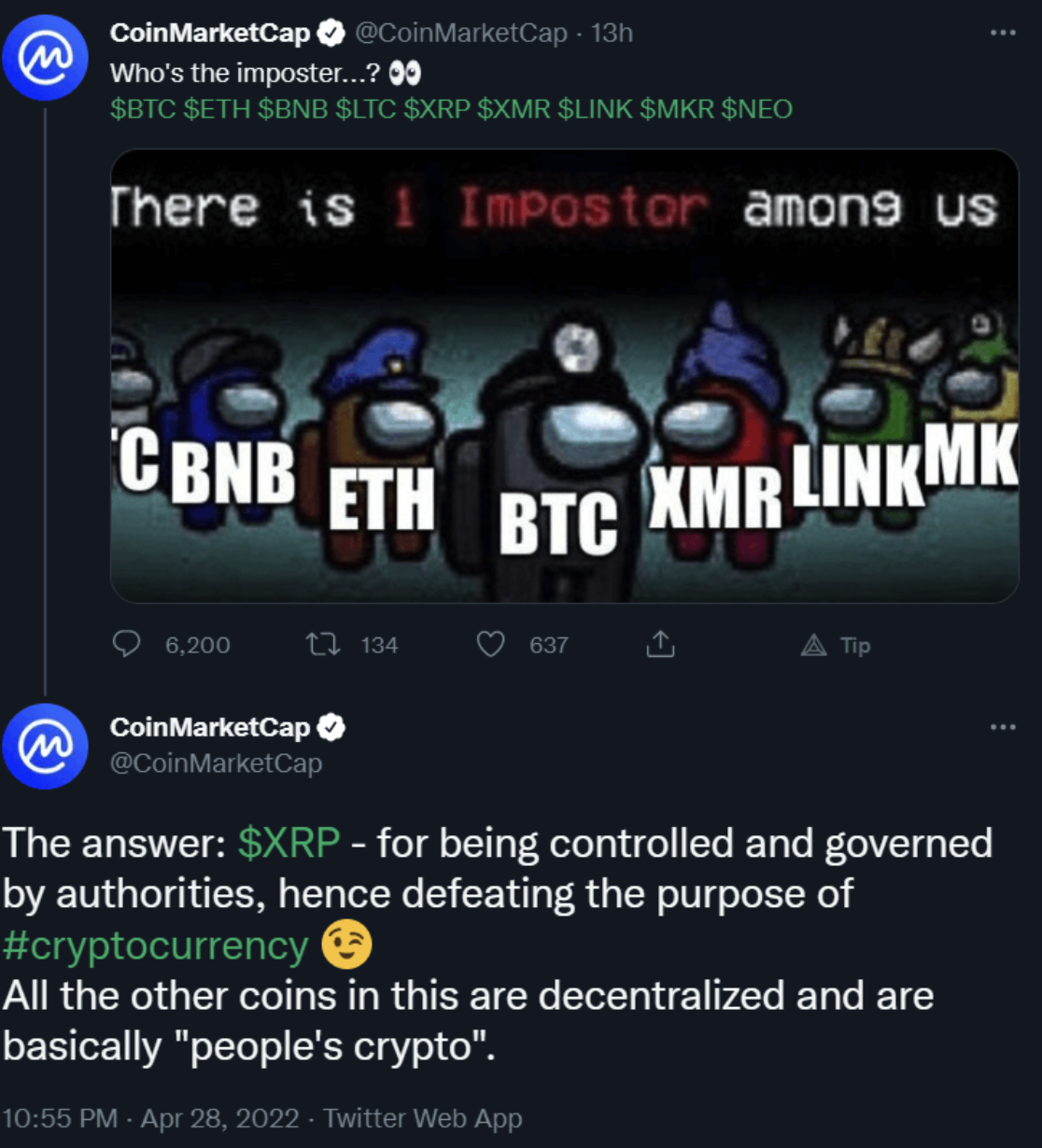 According to CMC, XRP is an impostor because it does not have the qualities of a real cryptocurrency, as it is managed and controlled by a central authority. It continued that “all the other coins in this are decentralized and are basically “people’s crypto.”

The statement caused a lot of outrage from many XRP advocates, who said that the aggregator was only showing its bias towards the token.

One user pointed out how the site “removed XRP’s volume stats from Korean markets without warning in early ’18.”

It’s clear $XRP holders have to deal with the most utter nonsense on CT.

Remember, this is the site that removed #XRP’s volume stats from Korean markets without warning in early ‘18.

Another user also accused CoinMarketCap of bias for leaving false information about XRP on their site for over two years. The fact that Binance Holdings owns CoinMarketCap has also led some participants to mine BNB, questioning whether it is decentralized.

But there are still people in the crypto community who believe that CMC is right. This, according to them, is not far from the truth, citing the ongoing case between Ripple and the Securities and Exchange Commission (SEC) over whether the token is a cryptocurrency or unregistered security. The lawsuit, recently extended to November 15, was initiated by the commission in 2020.

The regulator claims that XRP is unregistered security under the Howey Test, a claim that Ripple denies. The commission says that XRP’s centralization makes it security, unlike digital assets like Bitcoin, which are considered decentralized.

However, Ripple disagrees, saying that XRP qualifies as a cryptocurrency even if it is centralized. The CEO, Brad Garlinghouse, in a recent statement, said that the “only country on the planet that thinks XRP is a security is the United States.”

CoinMarketCap has since apologized for the deleted tweet and stated that it was a mistake. The aggregator claims that he himself does not care about the value of any cryptocurrency.

We made a mistake — #CoinMarketCap does not want to compare the merits of any crypto over the other.
A new team member was not familiar enough with our policy on commenting on other projects, but now they are!
We aim to be unbiased and let the algorithms do the talking.