Ripple believes that records held by foreign exchanges will prove its executives did not violate Section 5 of the Securities Act by offloading XRP on the U.S. public. Therefore, they filed a petition to the U.S. Securities and Exchange Commission to investigate 15 offshore exchanges.

Ripple CEO Brad Garlinghouse and co-founder Chris Larsen have filed a request with the US Securities and Exchange Commission to investigate the parent company of Bitfinex, iFinex, and 14 other international cryptocurrency exchanges. 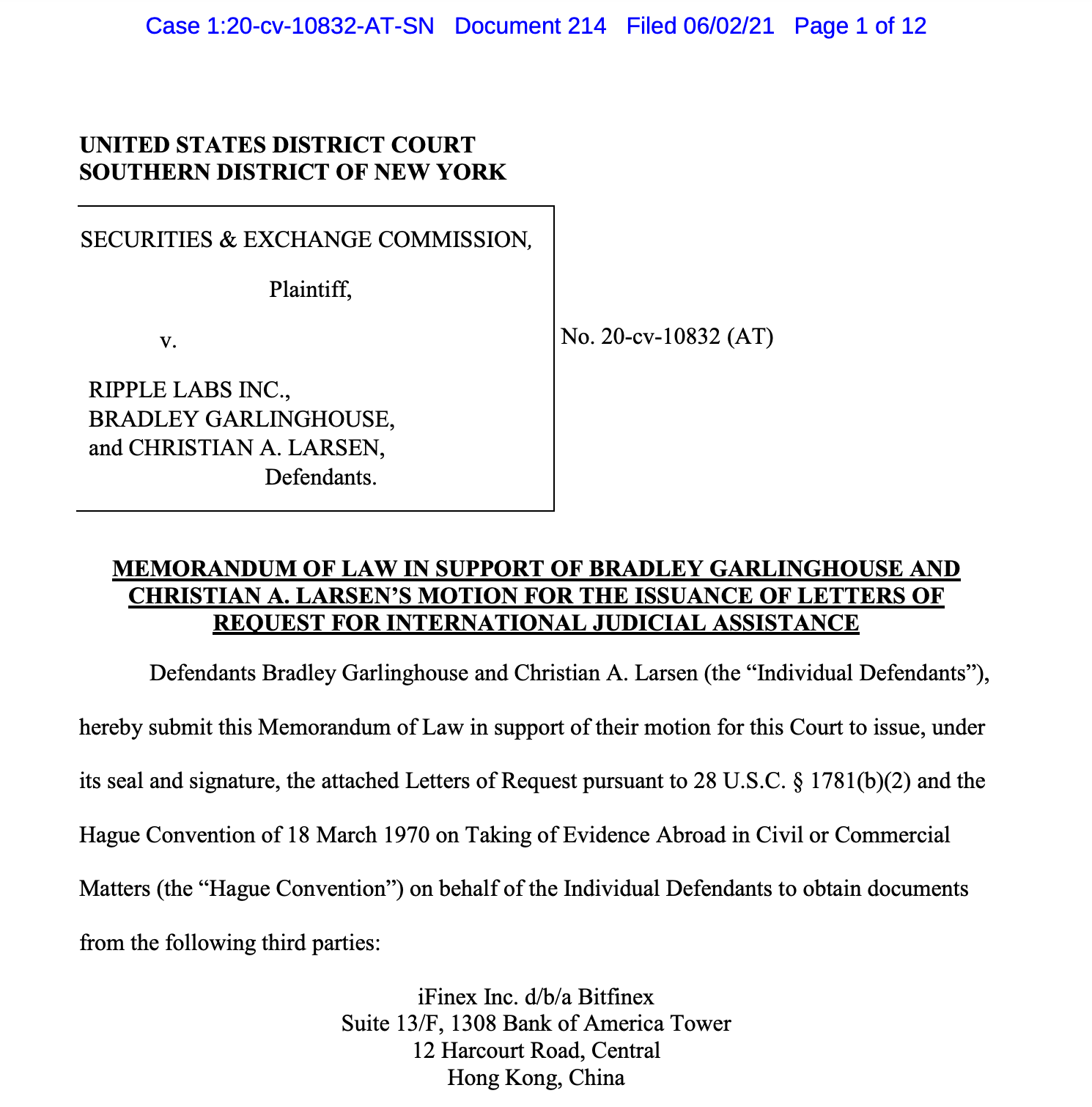 Elsewhere, the SEC still accuses the CEO of Garlinghouse and Larsen of selling more than two billion XRP tokens to public investors around the world. This leads the SEC to seek grievances from Ripple executives based on sales.

Ripple executives denied the SEC’s accusations that they violated Section 5 of the Securities Act of 1933. Furthermore, they emphasized that Section 5 specifically prohibits the sale of domestic securities without a registration statement.

Garlinghouse and Larsen’s legal representatives objected that the sale of their XRP was made on foreign exchanges and therefore outside the jurisdiction of the SEC:

“In the case of transactions conducted on such foreign trading platforms, both the offers of XRP and the sales of XRP occurred on the books and records of the respective platforms, and therefore geographically outside the United States. The SEC’s failure to allege domestic offers and sales should be fatal to its claims.”

Ripple asserts that exchanges and related entities are in possession of unique documents and information regarding Ripple’s legal battle with the SEC. Specifically concerning the process by which transactions in XRP allegedly conducted by the Individual Defendants on foreign digital asset trading platforms were conducted.

SEC has alleged that Ripple Labs executives Bradley Garlinghouse and Christian Larsen manipulated the XRP price by ramping up or slowing down their coin sales depending upon market conditions.

In an amended complaint filed Feb. 18, the plaintiff — the U.S Securities and Exchange Commission —reiterated its stance that Ripple Labs, Christian Larsen, and Brad Garlinghouse violated securities laws with the sale of XRP coins starting in 2013:

“From at least 2013 through the present, Defendants sold over 14.6 billion units of a digital asset security called ‘XRP,’ in return for cash or other consideration worth over $1.38 billion U.S. Dollars (‘USD’), to fund Ripple’s operations and enrich Larsen and Garlinghouse.”

The filing alleges that Larsen and Garlinghouse then profited to the tune of $600 million from their unregistered sales of XRP. The SEC notes that these sales took place while Garlinghouse repeatedly affirmed that he was “very long” on XRP — suggesting investors were being misled as Garlinghouse and Larsen cashed out:

“Ripple created an information vacuum such that Ripple and the two insiders with the most control over it—Larsen and Garlinghouse—could sell XRP into a market that possessed only the information Defendants chose to share about Ripple and XRP.”

The filing comes just days, with the court rejecting the SEC’s bid to access communications between Ripple and its legal counsel.