As AZCoin News reported, London-based bitcoin and cryptocurrency exchange Luno is adding support for Ripple’s XRP. The addition of XRP to Luno’s list of supported cryptocurrencies, which currently only includes Bitcoin, Ethereum, and Bitcoin Cash, will arrive within the next two weeks. Besides, base on some predictions, the XRP price can return to $ 0.30.

A straightforward reason. After conducting a year-long poll on a 3 million user base to date, the most popular choice is still XRP.

Earlier, Luno had asked their users which currency they wanted to buy the most, except for Bitcoin and Ethereum. In particular, Ripple’s XRP has topped with more than twice the number of votes than Bitcoin Cash. In addition to XRP, Litecoin and Stellar also have higher votes than Bitcoin Cash. This proves quite a lot of people are interested in smaller cryptocurrencies. 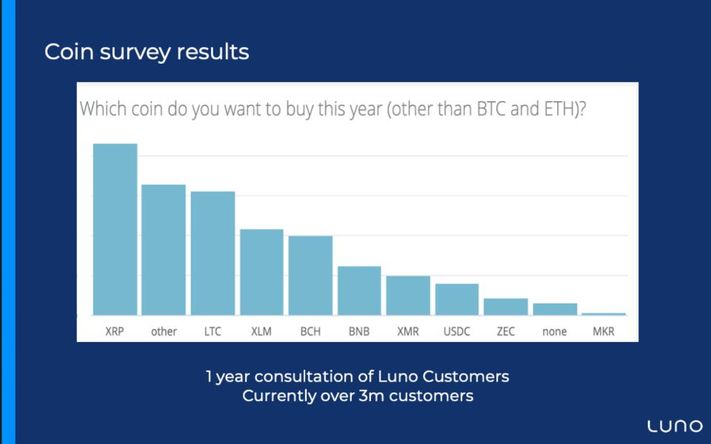 The XRP price has been struggling for the past 12 months, with several XRP traders and investors involved in Ripple, the company that created XRP and controls about 60% of it, are pushing down prices by dumping token on the market. In October, Ripple revealed it sold XRP worth $ 66 million in the third quarter of 2019, down 74% from sky-high sales of $ 251 million in the previous quarter.

XRP price surged last year when Binance announced it would add Ripple and Tether as a futures trading pair XRP.

In other happenings, Ripple’s On-Demand Liquidity (ODL) solution has been adopted by several banking organizations around the world, to reduce the cumbersome when transferring money across borders. However, many skeptics have raised questions regarding Ripple’s partnership with banks. Specifically, USDT or stablecoin would be better addition as they have more liquid than XRP.

Money transfer service #Azimo will use #Ripple‘s #ODL service to speed up the fund transfer in Philippines. Why not use #stablecoins instead? #USDT is more liquid than #XRP. This would have been a novelty in 2015. Now there are better options than XRP for moving fiat around.

Besides, Weiss Crypto Ratings posted a tweet criticizing XRP following recent news of Ripple’s cooperation with the UK-based money transfer platform Azimo. Azimo plans to set up an ODL corridor to provide payments to the Philippines.

Weiss Crypto Ratings said XRP might not be the perfect choice for that. Stablecoins and USDT, in particular, the liquidity is much higher than XRP.

This is not a new question. The XRP community has previously raised to answer such a problem while pointing out misconceptions about ODL and XRP. The @galgitron investor is the latest to comment on this topic, saying that stablecoins are the best that can happen to XRP.

In a recent blog post, Twitter user @gacheitron emphasized that although many people try to impose the idea that XRP is useful for making domestic payments, it is not. Converting his focus on Ripple’s ODL service, he noted that it serves only one purpose – to transfer value across borders.

“Although the creation of stablecoins is still annoying for some members of the community, they are often misunderstood as solving problems related to X-border payments. Calling it is only a faster version of the underlying fiat.”

While stablecoins can eliminate the need for Country A to have foreign assets in Country B’s bank account, this will lead to Country A owning / holding foreign funds and not just for one nation, but also to every nation. This gap forces users to choose dollars, with the use of a digital currency like XRP seem very unlikely.

“XRP will never compete in this category or in the corporate corridor, where the market has performed effectively.”

As a stablecoin, or for that matter, CBDC is constituted as a digital version of fiat currency, cross-border payments will lack a currency, although one can choose to use with a USD CBDC instead of ODL.

Galgitron added that it is highly likely that in terms of time, ODL can use stablecoins, instead of XRP. Ripple’s CTO David Schwartz talked about adding the stablecoin feature to the XRP ledger, but Twitter users said that ODL would not use bridging assets that are not based on XRP. XRPL will support an algorithm stablecoin that will programmatically allocate enough XRP to mortgage the coins.

What all this nonsense adds up is that XRP-backed stablecoins are still useful for XRP demand and appreciation, because that’s all about XRP behind XRPL stablecoins. With this, there may be many stablecoin pairs supported by XRP that can support ODL penetration in corridors that are still considered to be illiquid. Therefore, we can fully hope that when the stable currencies supported by XRP are available, financial institutions can hold them.

Dutch cryptocurrency analyst Michael van de Poppe took to Twitter to address the community and share with them a prediction about the price of XRP. Michael is considering XRP/USDT and XRP/BTC pairs. The third-valued currency has a chance to return to a high of $ 0.28 – $ 0.30 if for the first time regaining the level of $ 0.245.

The $USDT pair is in an support area here.

The $BTC pair also made a full retrace. pic.twitter.com/qOjLRTLLC3

Coronavirus: Fed was prepared to cut interest rates, what happens to Bitcoin?