PayPal’s entry into the cryptocurrency market can have a significant impact on Bitcoin price. That’s because, according to crypto investment firm Pantera Capital, the Bitcoin shortage is at the heart of the recent bull run, and most of the newly minted Bitcoin is being recovered by PayPal.

Paypal and Square have a significant impact on Bitcoin price

In its monthly report, crypto hedge fund manager Pantera Capital stated a staggering demand for PayPal’s new offering of cryptocurrencies. According to estimates, Paypal is gobbling up almost 70% of all new Bitcoins in circulation.

“When PayPal went live, volume started exploding. The increase in itBit volume implies that within four weeks of going live, PayPal is already buying almost 70% of the new supply of Bitcoin.”

According to Pantera, data shows that PayPal and Square’s Cash App is buying all newly released Bitcoin. The Cash App saw a 1,001% year-on-year increase in its Bitcoin revenue, skyrocketing above $ 1.6 billion in Q3 2020. After announcing its crypto services late in month 10, PayPal launched it to US customers on November 12. In 2021, PayPal plans to roll out its crypto features globally.

Bitcoin’s monetary policy is programmed to deflate over time. Wide adoption, leading to higher purchasing power and supply scarcity. Pantera claims that the latter is contributing to Bitcoin’s surge. 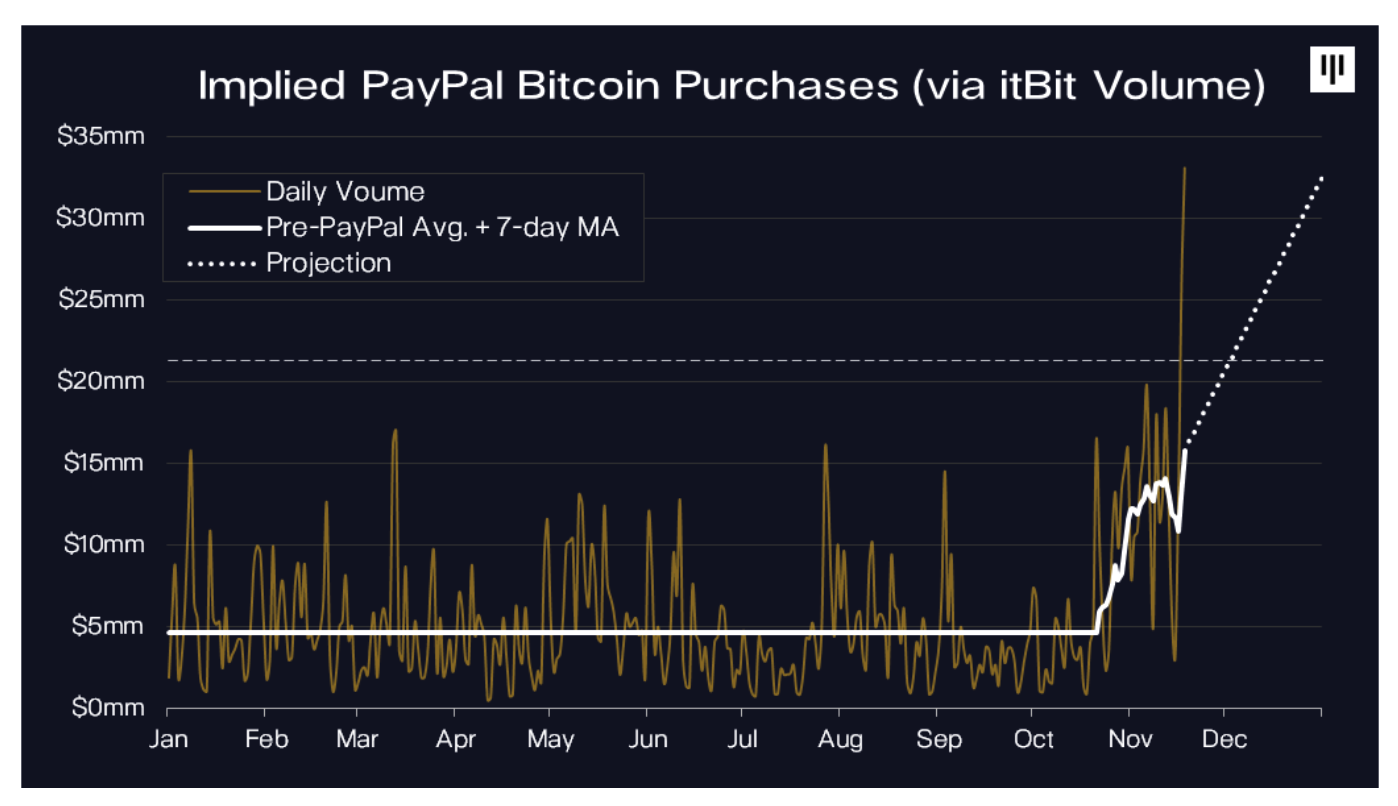 PayPal launched its cryptocurrency trading service in the US earlier this month, allowing customers to trade up to $ 20,000 a week. The platforms will be rolled out globally in early 2021.

Pantera says it’s now a lot easier to buy Bitcoin than during the last bull market in 2017. In addition to PayPal, retail promotions into Bitcoin and other digital currencies now include Cash App and Robinhood.

More widespread adoption means that the digital currency is more likely to maintain a higher price tag. Although Bitcoin is still volatile, it has produced an unusually long period of stability before rising higher in the past two months.

XRP price increased 12%; is it coming from the airdrop Flare Networks?

The risk of a strong rejection in the mid-to-upper…

CEO of Ripple: Bitcoin price have outperformed the…

Bitcoin price will increase in price along its path,…