An important aspect that makes Bitcoin different from fiat types is that it is mined. Therefore, those who want to mint BTC must achieve a minimum of computing power and consume a lot of electricity to do it, in stark contrast to the fiat money, which can be printed infinitely. And perhaps because of this (and some other reason), Ripple CEO Brad Garlinghouse thinks that XRP will be able to beat Bitcoin and Ethereum.

Although many people believe that the mining feature is more attractive to Bitcoin than fiat. However, there are also some critics that this is an essential factor in the growing climate crisis. It’s no secret that Bitcoin is not the most popular asset; Many economists and technologists around the world are skeptical about cryptocurrencies for a variety of reasons. One of the reasons cited is because it kills the Earth.

Ripple CEO is probably the one who cares about this issue.

Garlinghouse recently considered this debate, supporting critics who claim that Bitcoin (and Ethereum, etc.) energy consumption through mining is a colossal waste.

“There’s no incentive to take responsibility for the carbon footprint (of crypto mining). Absolutely (mind-blowing) that this isn’t high on the list for the growing climate crisis.”

Energy consumption for BTC and ETH mining is a massive waste and there’s no incentive to take responsibility for the carbon footprint. Absolutely 🤯 that this isn’t high on the agenda for the growing climate crisis… https://t.co/psR77m78Ua

Garlinghouse’s point of view comes from the energy consumption of a Bitcoin transaction equal to 780,650 Visa transactions. Although the numbers seem to support Garlinghouse’s assertion, some people are loyal to Bitcoin.

Including legendary Bitcoin proponent and educator Andreas Antonopoulos wrote in 2016 that holiday lights surrounding the trees and homes of millions across the globe use more energy in a week than entire small nations, before rhetorically asking “who’s wasteful?”

Not to mention, a 2019 report from cryptocurrency fund manager CoinShares shows that 77.6% of all Bitcoin mining is provided by renewable energy sources, especially hydropower in places like the region. Sichuan of China, the west coast of the United States and Canada.

Garlinghouse still a fan of Bitcoin and XRP

Garlinghouse’s latest criticism of cryptocurrency mining took place just weeks after he said that China controlled Bitcoin Bitcoin, before explaining that there are four mining companies in China accounting for 60% of the total. mining capacity for Bitcoin and 80% of capacity mining for both Bitcoin and Ethereum is based in China.

Despite this, despite Garlinghouse’s skepticism about Bitcoin mining, he is still a firm believer in Bitcoin. At the World Economic Forum 2020 in Davos, Garlinghouse said he is bullish on BTC as a store of value. 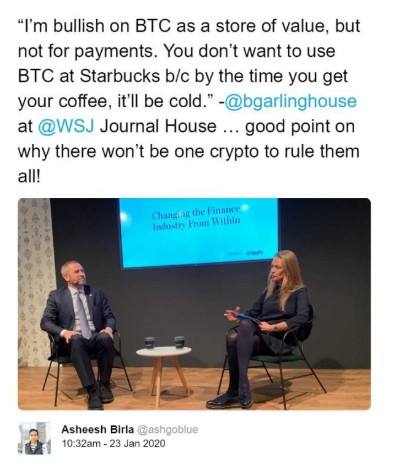 However, he poured cold water into the story that the primary use case of BTC is the vehicle for everyday transactions, ignoring that using Bitcoin at Starbucks will mean by the time you get your coffee, it. ‘ll be cold – referencing the blockchain’s ten-minute block times.

What is TomoP and how to create anonymous transactions under TomoP