The leading cryptocurrency is primed to appreciate in the long run despite short-term weakness. One crypto-asset analyst noted that there is a confluence of on-chain trends showing Bitcoin is bullish.

According to CryptoQuant, a crypto-asset analyst thinks that Bitcoin remains in a macro bull trend. He recently shared a confluence of on-chain trends showing why this is the case. Four of these trends are as follows:

The “exchange whale ratio,” which tracks how much Bitcoin large holders have deposited on exchanges, is currently low. This metric is the lowest it has been since the 2018 lows, suggesting that there is minimal selling pressure from large holders.

The amount of BTC that miners are sending to exchanges is currently at its lowest point since March 2017. This suggests that on-balance, miners think that Bitcoin will appreciate and thus aren’t hedging their holdings by selling coins.

Simultaneously, miner reserves have been dropping rapidly, suggesting they have little “ammo to dump.” It may be that Bitcoin miners are making over-the-counter deals, which is corroborated by a large number of high-profile Bitcoin accumulation announcements.

Finally, the market capitalization of stablecoins has exploded higher over recent months. This suggests that there is money on the sidelines to purchase Bitcoin and other crypto assets.

Dan Tapiero, the co-founder of DTAP Capital, Gold Bullion International, and other companies — recently said that Bitcoin could rapidly surge higher in the years ahead:

“Tremendous long term Log Chart of #Bitcoin projects up 5-10x on this run. Just breaking up NOW. Should last a few years as 2.5yr consolidation is fantastic base for catapult up. Break of old highs will have explosive follow through. Time to sit and be patient.”

Next Bitcoin Breakout Likely to Be Explosive

Bitcoin’s next macro breakout is likely to be explosive, according to an analysis by crypto fund manager Mohit Sorout. He is a founding partner of Bitazu Capital. 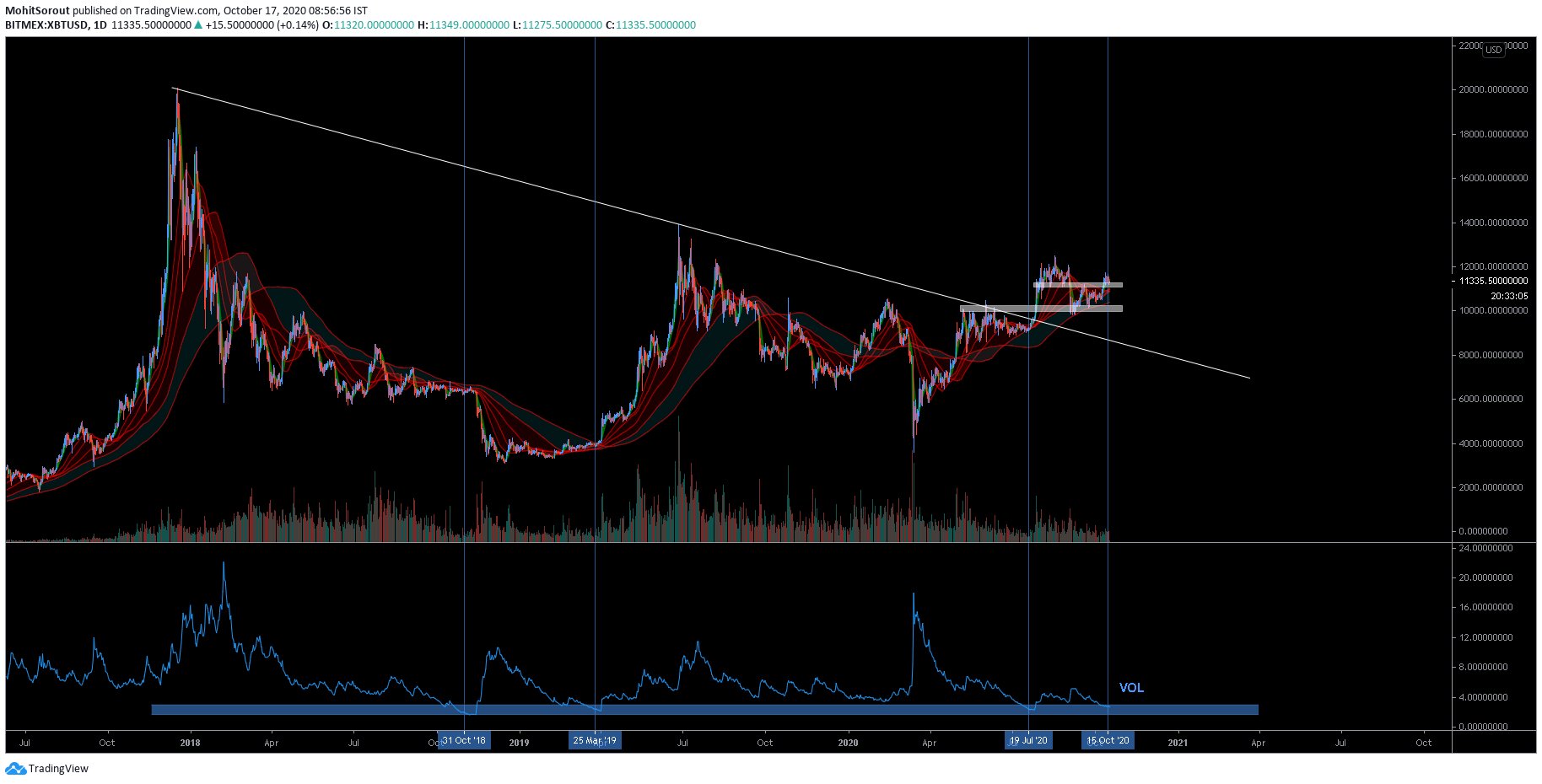 Sorout shared this chart above, which shows that on a macro basis, Bitcoin’s volatility is extremely low. In fact, it’s reaching lows seen rarely in BTC’s history, with these levels only occurring approximately once a year.

This is neither bearish nor bullish in its own right.

This suggests that should BTC break higher here, it will rip higher to new year-to-date highs:

“Calm before the storm. If BTC was to breakout today, it would most probably reach its previous ATH of $20k within 3 months.”

“Oxygen Orion” a new Monero update for improvements in performance, speed, and security